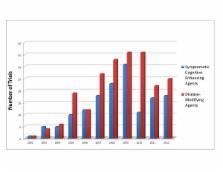 Alzheimer’s disease (AD) is increasing in frequency as the global population ages. Five drugs are approved for treatment of AD, including four cholinesterase inhibitors and an N-methyl-D-aspartate (NMDA)-receptor antagonist. We have an urgent need to find new therapies for AD.

We examined Clinicaltrials.gov, a public website that records ongoing clinical trials. We examined the decade of 2002 to 2012, to better understand AD-drug development. We reviewed trials by sponsor, sites, drug mechanism of action, duration, number of patients required, and rate of success in terms of advancement from one phase to the next. We also reviewed the current AD therapy pipeline.

During the 2002 to 2012 observation period, 413 AD trials were performed: 124 Phase 1 trials, 206 Phase 2 trials, and 83 Phase 3 trials. Seventy-eight percent were sponsored by pharmaceutical companies. The United States of America (U.S.) remains the single world region with the greatest number of trials; cumulatively, more non-U.S. than U.S. trials are performed. The largest number of registered trials addressed symptomatic agents aimed at improving cognition (36.6%), followed by trials of disease-modifying small molecules (35.1%) and trials of disease-modifying immunotherapies (18%). The mean length of trials increases from Phase 2 to Phase 3, and the number of participants in trials increases between Phase 2 and Phase 3. Trials of disease-modifying agents are larger and longer than those for symptomatic agents. A very high attrition rate was found, with an overall success rate during the 2002 to 2012 period of 0.4% (99.6% failure).

The Clinicaltrials.gov database demonstrates that relatively few clinical trials are undertaken for AD therapeutics, considering the magnitude of the problem. The success rate for advancing from one phase to another is low, and the number of compounds progressing to regulatory review is among the lowest found in any therapeutic area. The AD drug-development ecosystem requires support.

How to improve R&D productivity: the pharmaceutical industry's grand challenge.

Steven M. Paul,  Daniel Mytelka,  Christopher Dunwiddie … (2010)
The pharmaceutical industry is under growing pressure from a range of environmental issues, including major losses of revenue owing to patent expirations, increasingly cost-constrained healthcare systems and more demanding regulatory requirements. In our view, the key to tackling the challenges such issues pose to both the future viability of the pharmaceutical industry and advances in healthcare is to substantially increase the number and quality of innovative, cost-effective new medicines, without incurring unsustainable R&D costs. However, it is widely acknowledged that trends in industry R&D productivity have been moving in the opposite direction for a number of years. Here, we present a detailed analysis based on comprehensive, recent, industry-wide data to identify the relative contributions of each of the steps in the drug discovery and development process to overall R&D productivity. We then propose specific strategies that could have the most substantial impact in improving R&D productivity.

(2013)
This report provides information to increase understanding of the public health impact of Alzheimer's disease (AD), including incidence and prevalence, mortality rates, health expenditures and costs of care, and effect on caregivers and society in general. It also explores the roles and unique challenges of long-distance caregivers, as well as interventions that target those challenges. An estimated 5.2 million Americans have AD. Approximately 200,000 people younger than 65 years with AD comprise the younger onset AD population; 5 million comprise the older onset AD population. Throughout the coming decades, the baby boom generation is projected to add about 10 million to the total number of people in the United States with AD. Today, someone in America develops AD every 68 seconds. By 2050, one new case of AD is expected to develop every 33 seconds, or nearly a million new cases per year, and the total estimated prevalence is expected to be 13.8 million. AD is the sixth leading cause of death in the United States and the fifth leading cause of death in Americans age 65 years or older. Between 2000 and 2010, the proportion of deaths resulting from heart disease, stroke, and prostate cancer decreased 16%, 23%, and 8%, respectively, whereas the proportion resulting from AD increased 68%. The number of deaths from AD as determined by official death certificates (83,494 in 2010) likely underrepresents the number of AD-related deaths in the United States. A projected 450,000 older Americans with AD will die in 2013, and a large proportion will die as a result of complications of AD. In 2012, more than 15 million family members and other unpaid caregivers provided an estimated 17.5 billion hours of care to people with AD and other dementias, a contribution valued at more than $216 billion. Medicare payments for services to beneficiaries age 65 years and older with AD and other dementias are three times as great as payments for beneficiaries without these conditions, and Medicaid payments are 19 times as great. Total payments in 2013 for health care, long-term care, and hospice services for people age 65 years and older with dementia are expected to be $203 billion (not including the contributions of unpaid caregivers). An estimated 2.3 million caregivers of people with AD and other dementias live at least 1 hour away from the care recipient. These "long-distance caregivers" face unique challenges, including difficulty in assessing the care recipient's true health condition and needs, high rates of family disagreement regarding caregiving decisions, and high out-of-pocket expenses for costs related to caregiving. Out-of-pocket costs for long-distance caregivers are almost twice as high as for local caregivers. Copyright © 2013. Published by Elsevier Inc.

This is an Open Access article distributed under the terms of the Creative Commons Attribution License (http://creativecommons.org/licenses/by/4.0), which permits unrestricted use, distribution, and reproduction in any medium, provided the original work is properly credited. The Creative Commons Public Domain Dedication waiver (http://creativecommons.org/publicdomain/zero/1.0/) applies to the data made available in this article, unless otherwise stated.