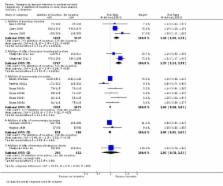 Loss to follow-up from randomised trials can introduce bias and reduce study power, affecting the generalisability, validity and reliability of results. Many strategies are used to reduce loss to follow-up and improve retention but few have been formally evaluated.

To quantify the effect of strategies to improve retention on the proportion of participants retained in randomised trials and to investigate if the effect varied by trial strategy and trial setting.

We included eligible retention trials of randomised or quasi-randomised evaluations of strategies to increase retention that were embedded in 'host' randomised trials from all disease areas and healthcare settings. We excluded studies aiming to increase treatment compliance.

We contacted authors to supplement or confirm data that we had extracted. For retention trials, we recorded data on the method of randomisation, type of strategy evaluated, comparator, primary outcome, planned sample size, numbers randomised and numbers retained. We used risk ratios (RR) to evaluate the effectiveness of the addition of strategies to improve retention. We assessed heterogeneity between trials using the Chi 2 and I 2 statistics. For main trials that hosted retention trials, we extracted data on disease area, intervention, population, healthcare setting, sequence generation and allocation concealment.

Most of the retention trials that we identified evaluated questionnaire response. There were few evaluations of ways to improve participants returning to trial sites for trial follow-up. Monetary incentives and offers of monetary incentives increased postal and electronic questionnaire response. Some other strategies evaluated in single trials looked promising but need further evaluation. Application of the findings of this review would depend on trial setting, population, disease area, data collection and follow-up procedures.

Methods that might help to keep people in randomised trials

Most trials follow people up to collect data through personal contact after they have been recruited. Some trials get data from other sources, such as routine collected data or disease registers. There are many ways to collect data from people in trials, and these include using letters, the internet, telephone calls, text messaging, face-to-face meetings or the return of medical test kits. Most trials have missing data, for example, because people are too busy to reply, are unable to attend a clinic, have moved or no longer want to participate. Sometimes data has not been recorded at study sites, or are not sent to the trial co-ordinating centre. Researchers call this 'loss to follow-up', 'drop out' or 'attrition' and it can affect the trial's results. For example, if the people with the most or least severe symptoms do not return questionnaires or attend a follow-up visit, this will bias the findings of the trial. Many methods are used by researchers to keep people in trials. These encourage people to send back data by questionnaire, return to a clinic or hospital for trial-related tests, or be seen by a health or community care worker.

This review identified methods that encouraged people to stay in trials. We searched scientific databases for randomised studies (where people are allocated to one of two or more possible treatments in a random manner) or quasi-randomised studies (where allocation is not really random, e.g. based on date of birth, order in which they attended clinic) that compared methods of increasing retention in trials. We included trials of participants from any age, gender, ethnic, cultural, language and geographic groups.

The methods that we identified were tested in trials run in many different disease areas and settings and, in some cases, were tested in only one trial. Therefore, more studies are needed to help decide whether our findings could be used in other research fields.

Bias in meta-analysis detected by a simple, graphical test.

M. Schneider,  C Minder,  J. G. Smith … (1997)
Funnel plots (plots of effect estimates against sample size) may be useful to detect bias in meta-analyses that were later contradicted by large trials. We examined whether a simple test of asymmetry of funnel plots predicts discordance of results when meta-analyses are compared to large trials, and we assessed the prevalence of bias in published meta-analyses. Medline search to identify pairs consisting of a meta-analysis and a single large trial (concordance of results was assumed if effects were in the same direction and the meta-analytic estimate was within 30% of the trial); analysis of funnel plots from 37 meta-analyses identified from a hand search of four leading general medicine journals 1993-6 and 38 meta-analyses from the second 1996 issue of the Cochrane Database of Systematic Reviews. Degree of funnel plot asymmetry as measured by the intercept from regression of standard normal deviates against precision. In the eight pairs of meta-analysis and large trial that were identified (five from cardiovascular medicine, one from diabetic medicine, one from geriatric medicine, one from perinatal medicine) there were four concordant and four discordant pairs. In all cases discordance was due to meta-analyses showing larger effects. Funnel plot asymmetry was present in three out of four discordant pairs but in none of concordant pairs. In 14 (38%) journal meta-analyses and 5 (13%) Cochrane reviews, funnel plot asymmetry indicated that there was bias. A simple analysis of funnel plots provides a useful test for the likely presence of bias in meta-analyses, but as the capacity to detect bias will be limited when meta-analyses are based on a limited number of small trials the results from such analyses should be treated with considerable caution.

Effects of a combination of beta carotene and vitamin A on lung cancer and cardiovascular disease.

Gilbert S. Omenn,  Gary Goodman,  Mark Thornquist … (1996)
Lung cancer and cardiovascular disease are major causes of death in the United States. It has been proposed that carotenoids and retinoids are agents that may prevent these disorders. We conducted a multicenter, randomized, double-blind, placebo-controlled primary prevention trial -- the Beta Carotene and Retinol Efficacy Trial -- involving a total of 18,314 smokers, former smokers, and workers exposed to asbestos. The effects of a combination of 30 mg of beta carotene per day and 25,000 IU of retinol (vitamin A) in the form of retinyl palmitate per day on the primary end point, the incidence of lung cancer, were compared with those of placebo. A total of 388 new cases of lung cancer were diagnosed during the 73,135 person-years of follow-up (mean length of follow-up, 4.0 years). The active-treatment group had a relative risk of lung cancer of 1.28 (95 percent confidence interval, 1.04 to 1.57; P=0.02), as compared with the placebo group. There were no statistically significant differences in the risks of other types of cancer. In the active-treatment group, the relative risk of death from any cause was 1.17 (95 percent confidence interval, 1.03 to 1.33); of death from lung cancer, 1.46 (95 percent confidence interval, 1.07 to 2.00); and of death from cardiovascular disease, 1.26 (95 percent confidence interval, 0.99 to 1.61). On the basis of these findings, the randomized trial was stopped 21 months earlier than planned; follow-up will continue for another 5 years. After an average of four years of supplementation, the combination of beta carotene and vitamin A had no benefit and may have had an adverse effect on the incidence of lung cancer and on the risk of death from lung cancer, cardiovascular disease, and any cause in smokers and workers exposed to asbestos.