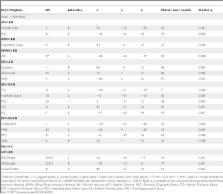 We compare 50 women (8 with BN, 18 with AN and 24 age-matched healthy controls [HC]) while they view food images during functional Magnetic Resonance Imaging (fMRI).

Walter Schneider,  Steve Cole (2007)
Consensus across hundreds of published studies indicates that the same cortical regions are involved in many forms of cognitive control. Using functional magnetic resonance imaging (fMRI), we found that these coactive regions form a functionally connected cognitive control network (CCN). Network status was identified by convergent methods, including: high inter-regional correlations during rest and task performance, consistently higher correlations within the CCN than the rest of cortex, co-activation in a visual search task, and mutual sensitivity to decision difficulty. Regions within the CCN include anterior cingulate cortex/pre-supplementary motor area (ACC/pSMA), dorsolateral prefrontal cortex (DLPFC), inferior frontal junction (IFJ), anterior insular cortex (AIC), dorsal pre-motor cortex (dPMC), and posterior parietal cortex (PPC). We used a novel visual line search task which included periods when the probe stimuli were occluded but subjects had to maintain and update working memory in preparation for the sudden appearance of a probe stimulus. The six CCN regions operated as a tightly coupled network during the 'non-occluded' portions of this task, with all regions responding to probe events. In contrast, the network was differentiated during occluded search. DLPFC, not ACC/pSMA, was involved in target memory maintenance when probes were absent, while both regions became active in preparation for difficult probes at the end of each occluded period. This approach illustrates one way in which a neuronal network can be identified, its high functional connectivity established, and its components dissociated in order to better understand the interactive and specialized internal mechanisms of that network.

Kent C. Berridge (2009)
What brain reward systems mediate motivational 'wanting' and hedonic 'liking' for food rewards? And what roles do those systems play in eating disorders? This article surveys recent findings regarding brain mechanisms of hedonic 'liking', such as the existence of cubic-millimeter hedonic hotspots in nucleus accumbens and ventral pallidum for opioid amplification of sensory pleasure. It also considers brain 'wanting' or incentive salience systems important to appetite, such as mesolimbic dopamine systems and opioid motivation circuits that extend beyond the hedonic hotspots. Finally, it considers some potential ways in which 'wanting' and 'liking' might relate to eating disorders.

Publisher ID: PONE-D-11-06129
DOI: 10.1371/journal.pone.0022259
PMC ID: 3140495
PubMed ID: 21799807
Copyright statement: Brooks et al. This is an open-access article distributed under the terms of the Creative Commons Attribution License, which permits unrestricted use, distribution, and reproduction in any medium, provided the original author and source are credited.