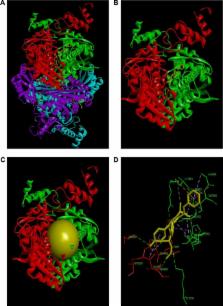 Cholesterol plays an important role in living cells. However, a very high level of cholesterol may lead to atherosclerosis. HMG-CoA (3-hydroxy-3-methylglutaryl coenzyme A) reductase is the key enzyme in the cholesterol biosynthesis pathway, and the statin-like drugs are inhibitors of human HMG-CoA reductase (hHMGR). The present study aimed to virtually screen for potential hHMGR inhibitors from natural product to discover hypolipidemic drug candidates with fewer side effects and lesser toxicities. We used the 3D structure 1HWK from the PDB (Protein Data Bank) database of hHMGR as the target to screen for the strongly bound compounds from the traditional Chinese medicine database. Many interesting molecules including polyphenolic compounds, polisubstituted heterocyclics, and linear lipophilic alcohols were identified and their ADMET (absorption, disrtibution, metabolism, excretion, toxicity) properties were predicted. Finally, four compounds were obtained for the in vitro validation experiments. The results indicated that curcumin and salvianolic acid C can effectively inhibit hHMGR, with IC 50 (half maximal inhibitory concentration) values of 4.3 µM and 8 µM, respectively. The present study also demonstrated the feasibility of discovering new drug candidates through structure-based virtual screening.

S. Singh,  J P Gaddipati,  Radha K Maheshwari … (2006)
Turmeric (Curcuma longa rhizomes), commonly used as a spice is well documented for its medicinal properties in Indian and Chinese systems of medicine. It has been widely used for the treatment of several diseases. Epidemiological observations, though inconclusive, are suggestive that turmeric consumption may reduce the risk of some form of cancers and render other protective biological effects in humans. These biological effects of turmeric have been attributed to its constituent curcumin that has been widely studied for its anti-inflammatory, anti-angiogenic, anti-oxidant, wound healing and anti-cancer effects. As a result of extensive epidemiological, clinical, and animal studies several molecular mechanisms are emerging that elucidate multiple biological effects of curcumin. This review summarizes the most interesting in vitro and in vivo studies on the biological effects of curcumin.

J. Deisenhofer,  E Istvan (2001)
HMG-CoA (3-hydroxy-3-methylglutaryl-coenzyme A) reductase (HMGR) catalyzes the committed step in cholesterol biosynthesis. Statins are HMGR inhibitors with inhibition constant values in the nanomolar range that effectively lower serum cholesterol levels and are widely prescribed in the treatment of hypercholesterolemia. We have determined structures of the catalytic portion of human HMGR complexed with six different statins. The statins occupy a portion of the binding site of HMG-CoA, thus blocking access of this substrate to the active site. Near the carboxyl terminus of HMGR, several catalytically relevant residues are disordered in the enzyme-statin complexes. If these residues were not flexible, they would sterically hinder statin binding.