(Cost)-effectiveness of family meetings on indicated prevention of anxiety and depressive symptoms and disorders of primary family caregivers of patients with dementia: design of a randomized controlled trial 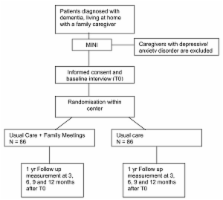 Dementia is a major public health problem with enormous costs to society and major consequences for both patients and their relatives. Family members of persons with dementia provide much of the care for older adults with dementia in the community. Caring for a demented relative is not easy and fraught with emotional strain, distress, and physical exhaustion. Family caregivers of dementia patients have an extremely high risk developing affective disorders such as major depression and anxiety disorder. Family meetings appear to be among the most powerful psychosocial interventions to reduce depression in caregivers.

An American landmark study reported substantial beneficial effects of a multifaceted intervention where family meetings had a central place on depression in family caregivers as well as on delay of institutionalization of patients. These effects were not replicated in other countries yet. We perform the first trial comparing only structured family meetings with significant others versus usual care among primary family caregivers of community dwelling demented patients and measure the effectiveness on both depression and anxiety in the primary caregiver, both on disorder and symptom levels.

In this randomized controlled trial effectiveness as well as cost-effectiveness of family meetings is evaluated. The intervention group receives four family meetings with family and close friends of the primary family caregiver of a community dwelling patient with a clinical diagnosis of dementia. Dyads of patients and their primary caregiver are followed up to one year after baseline assessment. The main outcome measures are the incidence of anxiety and depressive disorders assessed with the Mini-International Neuropsychiatric Interview (MINI) and the severity of anxiety and depressive symptoms in caregivers is measured by validated self report instruments: the Centre for Epidemiologic Studies Depression Scale (CES-D) for depression and the anxiety scales of the Hospital Anxiety and Depression scales (HADS) for anxiety. The economic evaluation is performed from a societal perspective.

By evaluating the effectiveness of only structured family meetings organized in the Netherlands, this study will contribute to the existing literature about the value of psychosocial interventions for dementia caregivers.

The estimation of a preference-based measure of health from the SF-12.

Jennifer Roberts,  John Brazier (2004)
The SF-12 is a multidimensional generic measure of health-related quality of life. It has become widely used in clinical trials and routine outcome assessment because of its brevity and psychometric performance, but it cannot be used in economic evaluation in its current form. We sought to derive a preference-based measure of health from the SF-12 for use in economic evaluation and to compare it with the original SF-36 preference-based index. The SF-12 was revised into a 6-dimensional health state classification (SF-6D [SF-12]) based on an item selection process designed to ensure the minimum loss of descriptive information. A sample of 241 states defined by the SF-6D (of 7500) have been valued by a representative sample of 611 members of the UK general population using the standard gamble (SG) technique. Models are estimated of the relationship between the SF-6D (SF-12) and SG values and evaluated in terms of their coefficients, overall fit, and the ability to predict SG values for all health states. The models have produced significant coefficients for levels of the SF-6D (SF-12), which are robust across model specification. The coefficients are similar to those of the SF-36 version and achieve similar levels of fit. There are concerns with some inconsistent estimates and these have been merged to produce the final recommended model. As for the SF-36 model, there is evidence of over prediction of the value of the poorest health states. The SF-12 index provides a useful tool for researchers and policy makers wishing to assess the cost-effectiveness of interventions.

The friction cost method for measuring indirect costs of disease.

Marc Koopmanschap,  Frans Rutten,  B.Martin van Ineveld … (1995)
A new approach for estimating the indirect costs of disease, which explicitly considers economic circumstances that limit production losses due to disease, is presented (the friction cost method). For the Netherlands the short-term friction costs in 1990 amount to 1.5-2.5% of net national income (NNI), depending on the extent to which short-term absence from work induces production loss and costs. The medium-term macro-economic consequences of absence from work and disability reduce NNI by an additional 0.8%. These estimates are considerably lower than estimates based on the traditional human capital approach, but they better reflect the economic impact of illness.