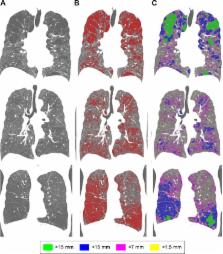 A novel approach of size-based emphysema clustering has been developed, and the size variation and collapse of holes in emphysema clusters are evaluated at inspiratory and expiratory computed tomography (CT). Thirty patients were visually evaluated for the size-based emphysema clustering technique and a total of 72 patients were evaluated for analyzing collapse of the emphysema hole in this study. A new approach for the size differentiation of emphysema holes was developed using the length scale, Gaussian low-pass filtering, and iteration approach. Then, the volumetric CT results of the emphysema patients were analyzed using the new method, and deformable registration was carried out between inspiratory and expiratory CT. Blind visual evaluations of EI by two readers had significant correlations with the classification using the size-based emphysema clustering method ( r-values of reader 1: 0.186, 0.890, 0.915, and 0.941; reader 2: 0.540, 0.667, 0.919, and 0.942). The results of collapse of emphysema holes using deformable registration were compared with the pulmonary function test (PFT) parameters using the Pearson’s correlation test. The mean extents of low-attenuation area (LAA), E1 (<1.5 mm), E2 (<7 mm), E3 (<15 mm), and E4 (≥15 mm) were 25.9%, 3.0%, 11.4%, 7.6%, and 3.9%, respectively, at the inspiratory CT, and 15.3%, 1.4%, 6.9%, 4.3%, and 2.6%, respectively at the expiratory CT. The extents of LAA, E2, E3, and E4 were found to be significantly correlated with the PFT parameters ( r=−0.53, −0.43, −0.48, and −0.25), with forced expiratory volume in 1 second (FEV 1; −0.81, −0.62, −0.75, and −0.40), and with diffusing capacity of the lungs for carbon monoxide (cDLco), respectively. The fraction of emphysema that shifted to the smaller subgroup showed a significant correlation with FEV 1, cDLco, forced expiratory flow at 25%–75% of forced vital capacity, and residual volume (RV)/total lung capacity ( r=0.56, 0.73, 0.40, and −0.58). A detailed assessment of the size variation and collapse of emphysema holes may be useful for understanding the dynamic collapse of emphysema and its functional relation.

The Fractal Geometry of Nature

Comparison of computed density and macroscopic morphometry in pulmonary emphysema.

J Zanen,  J Leenheer,  V De Brito Poveda … (1995)
High-resolution computed tomography (HRCT) scans were obtained at 1 cm intervals in 63 subjects referred for surgical resection of a cancer or for transplantation to find out whether the relative area of lung occupied by attenuation values lower than a threshold would be a measurement of macroscopic emphysema. Using a semiautomatic procedure, the relative areas occupied by attenuation values lower than eight thresholds ranging from -900 to -970 HU were calculated on the set of scans obtained through the lobe or the lung to be resected. The extent of emphysema was quantified by a computer-assisted method on horizontal paper-mounted lung sections obtained every 1 to 2 cm. The only level for which no statistically significant difference was found between the HRCT and the morphometric data was -950 HU. To determine the number of scans sufficient for an accurate quantification, we recalculated the relative area occupied by attenuation values lower than -950 HU on progressively fewer numbers of scans and investigated the departure from the results obtained with 1 cm intervals. Because of wide variations in this departure from patient to patient, a standard cannot be recommended as the optimal distance between scans.

Comparison of computed density and microscopic morphometry in pulmonary emphysema.

J Zanen,  J Leenheer,  Danielle Cosio … (1996)
The purpose of this prospective study was to verify whether the percentage area of lung occupied by lowest attenuation values on high-resolution computed tomography (HRCT) scans reflects microscopic emphysema and to compare this quantification with the information yielded by the most widely used pulmonary function tests (PFT). Preoperative HRCT scans were obtained with 1-cm intervals in 38 subjects. With a semiautomatic evaluation procedure, the percentage areas occupied by attenuation values inferior to thresholds ranging from -900 Hounsfield units (HU) to -970 HU were calculated for the lobe or lung to be resected. Emphysema was microscopically quantified by using a computer-based method, measuring the perimeters and interwall distances of alveoli and alveolar ducts. The strongest correlation was found for -950 HU. As a second step, we evaluated possible correlations between PFT and microscopic measurements. Finally, considering the microscopic measurements as a standard, we tried to investigate their relationships with each of the PFT and with the relative area occupied by attenuation values lower than -950 HU for both lungs. This revealed that the diffusing capacity for carbon monoxide associated with HRCT quantification is sufficient to predict microscopic measurements. We concluded that the percentage area of lung occupied by attenuation values lower than -950 HU is a valid index of pulmonary emphysema.