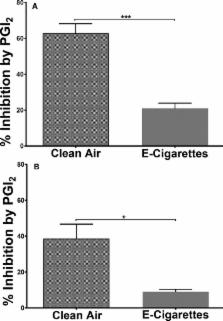 Cardiovascular disease is the main cause of death in the United States, with smoking being the primary preventable cause of premature death, and thrombosis being the main mechanism of cardiovascular mortality in smokers. Due to the perception that electronic/e‐cigarettes are “safer/less harmful” than conventional cigarettes, their usage—among a variety of ages—has increased tremendously during the past decade. Notably, there are limited studies regarding the negative effects of e‐cigarettes on the cardiovascular system, which is also the subject of significant debate.

We employed a passive e‐Vape TM vapor inhalation system and developed an in vivo whole‐body e‐cigarette mouse exposure protocol that mimics real‐life human exposure scenarios/conditions and investigated the effects of e‐cigarettes and clean air on platelet function and thrombogenesis. Our results show that platelets from e‐cigarette–exposed mice are hyperactive, with enhanced aggregation, dense and α granule secretion, activation of the α IIbβ3 integrin, phosphatidylserine expression, and Akt and ERK activation, when compared with clean air–exposed platelets. E‐cigarette–exposed platelets were also found to be resistant to inhibition by prostacyclin, relative to clean air. Furthermore, the e‐cigarette–exposed mice exhibited a shortened thrombosis occlusion and bleeding times.

Taken together, our data demonstrate for the first time that e‐cigarettes alter physiological hemostasis and increase the risk of thrombogenic events. This is attributable, at least in part, to the hyperactive state of platelets. Thus, the negative health consequences of e‐cigarette exposure should not be underestimated and warrant further investigation.

Cardiovascular effects of secondhand smoke: nearly as large as smoking.

Monique Williams,  Amanda Villarreal,  Krassimir Bozhilov … (2013)
Background Electronic cigarettes (EC) deliver aerosol by heating fluid containing nicotine. Cartomizer EC combine the fluid chamber and heating element in a single unit. Because EC do not burn tobacco, they may be safer than conventional cigarettes. Their use is rapidly increasing worldwide with little prior testing of their aerosol. Objectives We tested the hypothesis that EC aerosol contains metals derived from various components in EC. Methods Cartomizer contents and aerosols were analyzed using light and electron microscopy, cytotoxicity testing, x-ray microanalysis, particle counting, and inductively coupled plasma optical emission spectrometry. Results The filament, a nickel-chromium wire, was coupled to a thicker copper wire coated with silver. The silver coating was sometimes missing. Four tin solder joints attached the wires to each other and coupled the copper/silver wire to the air tube and mouthpiece. All cartomizers had evidence of use before packaging (burn spots on the fibers and electrophoretic movement of fluid in the fibers). Fibers in two cartomizers had green deposits that contained copper. Centrifugation of the fibers produced large pellets containing tin. Tin particles and tin whiskers were identified in cartridge fluid and outer fibers. Cartomizer fluid with tin particles was cytotoxic in assays using human pulmonary fibroblasts. The aerosol contained particles >1 µm comprised of tin, silver, iron, nickel, aluminum, and silicate and nanoparticles (<100 nm) of tin, chromium and nickel. The concentrations of nine of eleven elements in EC aerosol were higher than or equal to the corresponding concentrations in conventional cigarette smoke. Many of the elements identified in EC aerosol are known to cause respiratory distress and disease. Conclusions The presence of metal and silicate particles in cartomizer aerosol demonstrates the need for improved quality control in EC design and manufacture and studies on how EC aerosol impacts the health of users and bystanders.

Ms Qasim and Dr Karim contributed equally to this work.

Funded by: University of Texas at El Paso