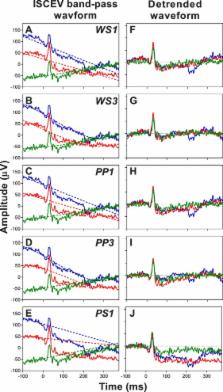 Photopic ERGs were recorded in 20 glaucoma and 18 age-matched control participants. A total of 50 brief, red-flashes (1.6 cd.s/m 2) on a blue background (10 photopic cd/m 2) were delivered using the RETeval device. Detrending methods compared were: (1) increasing the high-pass filter from 1 to 10 Hz and (2) estimating and removing the trend with an increasing polynomial (order from 1–10) applied to the prestimulus interval, prestimulus and postsignal interval, or the whole ERG signal. Coefficient of repeatability (COR%), unpaired Student's t-test, and area under the receiver operating characteristic curve (AUC) were used to compare the detrending methods.

Most detrending methods improved PhNR test–retest repeatability compared to the International Society for Clinical Electrophysiology of Vision (ISCEV) recommended 0.3 to 300 Hz band-pass filter (COR% ± 200%). In particular, detrending with a polynomial (order 3) applied to the whole signal performed the best (COR% ± 44%) while achieving similar diagnostic ability as ISCEV band-pass (AUC 0.74 vs. 0.75, respectively). However, over-correcting with higher orders of processing can cause waveform distortion and reduce diagnostic ability.

Baseline detrending can improve the PhNR repeatability without compromising its clinical use in glaucoma. Further studies exploring more complex processing methods are encouraged.

Baseline detrending can significantly improve the quality of the PhNR.

The photopic negative response of the flash electroretinogram in primary open angle glaucoma.

Hari S. Viswanathan,  Kylie J. Walters,  L Frishman … (2001)
To determine whether the photopic negative response (PhNR) of the electroretinogram (ERG) is reduced in patients with primary open angle glaucoma (POAG). ERGs were recorded with DTL electrodes from 62 normal subjects (16 to 82 years), 18 POAG patients (47 to 83 years) and 7 POAG suspects (46 to 73 years) to brief flashes (<6 ms), and also in a few subjects to long (200 ms) red, full-field ganzfeld flashes delivered on a rod-saturating blue background. At the time of ERG measurements, the intraocular pressures of most of the patients were controlled medically. Visual field sensitivities were measured with the Humphrey C24-2 threshold test and optic nerve head cup-to-disc ratio (C/D) was determined by binocular indirect ophthalmoscopy. ERGs of normal subjects contained a slow negative potential following the a- and b-waves, the PhNR, that increased slightly in latency with age. The a- and b-wave amplitudes and implicit times of POAG patients were similar to age-matched controls. In contrast, their PhNRs were small or virtually absent. PhNR amplitudes were reduced even when visual sensitivity losses were small, and were correlated significantly (P < 0.05) with mean deviation (MD), corrected pattern SD (CPSD), and C/D across the population of POAG patients whose MD losses ranged from 1 to 13 dB, CPSDs from 0 to 11 dB and C/Ds from 0.6 to 0.9. PhNRs of most POAG suspects also were small. PhNR amplitudes in POAG patients are smaller than those of normal subjects. PhNR amplitudes are reduced when visual field sensitivity losses are mild and become even smaller as sensitivity losses increase. There is a potential role for the PhNR in early detection and possibly in monitoring the progression of glaucomatous damage.

Charlotte Poloschek,  W D Lagrèze,  Dunja Preiser … (2013)
Photopic negative response (PhNR) and pattern electroretinogram (PERG) are electrophysiological markers of retinal ganglion cell function; both are reduced in glaucoma. We compared PhNR and PERG in different stages of the disease. Eleven eyes with preperimetric glaucoma (glaucomatous optic disc with normal field); 18 with manifest glaucoma; and 26 normals were included. We obtained PhNR (flash strength from 0.1-4 cd·s/m(2)) and steady-state PERG and analyzed PhNR amplitude (baseline to 72 ms trough); PhNR/b-wave ratio; PERG amplitude; and PERG ratio (0.8°/16°). Identification of PhNR structure was only reliable ≥1 cd·s/m(2) flash strength; amplitude and receiver operating characteristics (ROC) area under curve (AUC) changed little from 1 to 4 cd·s/m(2). Both PhNR and PERG (amplitude and ratio) were reduced in preperimetric and more so in manifest glaucoma. AUCs based on PhNR/PERG amplitudes were not significantly different from chance in preperimetric glaucoma (AUCs 0.61/0.59), but were significant in manifest glaucoma (0.78/0.76); ratios were significant in both glaucoma groups (0.80/0.73 and 0.80/0.79). In spite of that, PhNR ratio and PERG ratio were not significantly correlated (r = 0.22 across all groups); an ROC based on a combination of both reached AUCs of 0.85/0.90 for preperimetric/manifest glaucoma. Both PhNR and PERG performed similarly to detect glaucoma; for both, ratios performed better than amplitudes. The PhNR has the advantage of not requiring clear optics and refractive correction; the PERG has the advantage of being recorded with natural pupils.