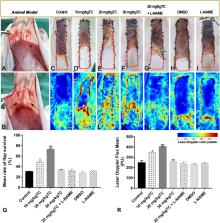 The application of random pattern skin flaps is limited in plastic surgery reconstruction due to necrosis. Trans-cinnamaldehyde has antibacterial, anticancer, and antioxidant properties. In this study, we aimed to investigate the effect of trans-cinnamaldehyde on skin flap survival and its possible mechanism regarding nitric oxide.

One hundred forty male Sprague-Dawley rats were randomly divided into seven groups (n = 20 each group). After the dorsal flap was raised, different doses of trans-cinnamaldehyde (10, 20, and 30 mg/kg) were immediately given by oral gavage in the three different groups. To assess the possible involvement of the nitric oxide system, N G-nitro-L-arginine methyl ester (L-NAME, a nonselective nitric oxide synthase inhibitor) was used in this study. All flap samples were incised on postoperative day 7.

Our results showed that flap survival was increased significantly in the 20 mg/kg (P < 0.001) trans-cinnamaldehyde (TC) group compared to the control group or 30 mg/kg TC group. This protective function was restrained by coadministration of L-NAME with 20 mg/kg TC. The results of histopathology, laser Doppler, arteriography mediated with oxide–gelatine, and fluorescent staining all showed a significant increase in capillary count, collagen deposition, angiogenesis, and flap perfusion. Immunohistochemistry results revealed a significant increase in the expression of CD34, eNOS, and VEGF.

A comparison of chemical, antioxidant and antimicrobial studies of cinnamon leaf and bark volatile oils, oleoresins and their constituents.

Gurdip Tamber,  S. Maurya,  M DeLampasona … (2007)
The antioxidant, antifungal and antibacterial potentials of volatile oils and oleoresin of Cinnamomum zeylanicum Blume (leaf and bark) were investigated in the present study. The oleoresins have shown excellent activity for the inhibition of primary and secondary oxidation products in mustard oil added at the concentration of 0.02% which were evaluated using peroxide, thiobarbituric acid, p-anisidine and carbonyl values. Moreover, it was further supported by other complementary antioxidant assays such as ferric thiocyanate method in linoleic acid system, reducing power, chelating and scavenging effects on 1,1'-diphenyl-2-picrylhydrazyl (DPPH) and hydroxyl radicals. In antimicrobial investigations, using inverted petriplate and food poison techniques, the leaf and bark volatile oils has been found to be highly effective against all the tested fungi except Aspergillus ochraceus. However, leaf oleoresin has shown inhibition only for Penicillium citrinum whereas bark oleoresin has caused complete mycelial zone inhibition for Aspergillus flavus and A. ochraceus along with Aspergillus niger, Aspergillus terreus, P. citrinum and Penicillium viridicatum at 6 microL. Using agar well diffusion method, leaf volatile oil and oleoresin have shown better results in comparison with bark volatile oil, oleoresin and commercial bactericide, i.e., ampicillin. Gas chromatographic-mass spectroscopy studies on leaf volatile oil and oleoresin resulted in the identification of 19 and 25 components, which accounts for the 99.4% and 97.1%, respectively of the total amount and the major component was eugenol with 87.3% and 87.2%, respectively. The analysis of cinnamon bark volatile oil showed the presence of 13 components accounting for 100% of the total amount. (E)-cinnamaldehyde was found as the major component along with delta-cadinene (0.9%), whereas its bark oleoresin showed the presence of 17 components accounting for 92.3% of the total amount. The major components were (E)-cinnamaldehyde (49.9%), along with several other components.

Priyanga Ranasinghe,  Shehani Pigera,  GA Premakumara … (2013)
Background In traditional medicine Cinnamon is considered a remedy for respiratory, digestive and gynaecological ailments. In-vitro and in-vivo studies from different parts of the world have demonstrated numerous beneficial medicinal effects of Cinnamomum zeylanicum (CZ). This paper aims to systematically review the scientific literature and provide a comprehensive summary on the potential medicinal benefits of CZ. Methods A comprehensive systematic review was conducted in the following databases; PubMed, Web of Science, SciVerse Scopus for studies published before 31st December 2012. The following keywords were used: “Cinnamomum zeylanicum”, “Ceylon cinnamon”, “True cinnamon” and “Sri Lankan cinnamon”. To obtain additional data a manual search was performed using the reference lists of included articles. Results The literature search identified the following number of articles in the respective databases; PubMed=54, Web of Science=76 and SciVerse Scopus=591. Thirteen additional articles were identified by searching reference lists. After removing duplicates the total number of articles included in the present review is 70. The beneficial health effects of CZ identified were; a) anti-microbial and anti-parasitic activity, b) lowering of blood glucose, blood pressure and serum cholesterol, c) anti-oxidant and free-radical scavenging properties, d) inhibition of tau aggregation and filament formation (hallmarks of Alzheimer’s disease), e) inhibitory effects on osteoclastogenesis, f) anti-secretagogue and anti-gastric ulcer effects, g) anti-nociceptive and anti-inflammatory activity, h) wound healing properties and i) hepato-protective effects. The studies reported minimal toxic and adverse effects. Conclusions The available in-vitro and in-vivo evidence suggests that CZ has many beneficial health effects. However, since data on humans are sparse, randomized controlled trials in humans will be necessary to determine whether these effects have public health implications.