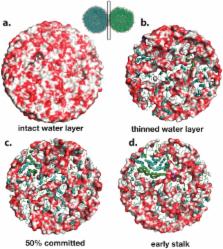 Membrane fusion is essential to both cellular vesicle trafficking and infection by enveloped viruses. While the fusion protein assemblies that catalyze fusion are readily identifiable, the specific activities of the proteins involved and nature of the membrane changes they induce remain unknown. Here, we use many atomic-resolution simulations of vesicle fusion to examine the molecular mechanisms for fusion in detail. We employ committor analysis for these million-atom vesicle fusion simulations to identify a transition state for fusion stalk formation. In our simulations, this transition state occurs when the bulk properties of each lipid bilayer remain in a lamellar state but a few hydrophobic tails bulge into the hydrophilic interface layer and make contact to nucleate a stalk. Additional simulations of influenza fusion peptides in lipid bilayers show that the peptides promote similar local protrusion of lipid tails. Comparing these two sets of simulations, we obtain a common set of structural changes between the transition state for stalk formation and the local environment of peptides known to catalyze fusion. Our results thus suggest that the specific molecular properties of individual lipids are highly important to vesicle fusion and yield an explicit structural model that could help explain the mechanism of catalysis by fusion proteins.

Membrane fusion is a common underlying process critical to neurotransmitter release, cellular trafficking, and infection by many viruses. Proteins have been identified that catalyze fusion, and mutations to these proteins have yielded important information on how fusion occurs. However, the precise mechanism by which membrane fusion begins is the subject of active investigation. We have used atomic-resolution simulations to model the process of vesicle fusion and to identify a transition state for the formation of an initial fusion stalk. Doing so required substantial technical advances in combining high-performance simulation and distributed computing to analyze the transition state of a complex reaction in a large system. The transition state we identify in our simulations involves specific structural changes by a few lipid molecules. We also simulate fusion peptides from influenza hemagglutinin and show that they promote the same structural changes as are required for fusion in our model. We therefore hypothesize that these changes to individual lipid molecules may explain a portion of the catalytic activity of fusion proteins such as influenza hemagglutinin.

A point-charge force field for molecular mechanics simulations of proteins based on condensed-phase quantum mechanical calculations.

Rong Yang,  Ray Luo,  Yong-Chao Duan … (2003)
Molecular mechanics models have been applied extensively to study the dynamics of proteins and nucleic acids. Here we report the development of a third-generation point-charge all-atom force field for proteins. Following the earlier approach of Cornell et al., the charge set was obtained by fitting to the electrostatic potentials of dipeptides calculated using B3LYP/cc-pVTZ//HF/6-31G** quantum mechanical methods. The main-chain torsion parameters were obtained by fitting to the energy profiles of Ace-Ala-Nme and Ace-Gly-Nme di-peptides calculated using MP2/cc-pVTZ//HF/6-31G** quantum mechanical methods. All other parameters were taken from the existing AMBER data base. The major departure from previous force fields is that all quantum mechanical calculations were done in the condensed phase with continuum solvent models and an effective dielectric constant of epsilon = 4. We anticipate that this force field parameter set will address certain critical short comings of previous force fields in condensed-phase simulations of proteins. Initial tests on peptides demonstrated a high-degree of similarity between the calculated and the statistically measured Ramanchandran maps for both Ace-Gly-Nme and Ace-Ala-Nme di-peptides. Some highlights of our results include (1) well-preserved balance between the extended and helical region distributions, and (2) favorable type-II poly-proline helical region in agreement with recent experiments. Backward compatibility between the new and Cornell et al. charge sets, as judged by overall agreement between dipole moments, allows a smooth transition to the new force field in the area of ligand-binding calculations. Test simulations on a large set of proteins are also discussed. Copyright 2003 Wiley Periodicals, Inc. J Comput Chem 24: 1999-2012, 2003

J McNew,  Kenneth J. Rothman,  F Parlati … (1998)
Recombinant v- and t-SNARE proteins reconstituted into separate lipid bilayer vesicles assemble into SNAREpins-SNARE complexes linking two membranes. This leads to spontaneous fusion of the docked membranes at physiological temperature. Docked unfused intermediates can accumulate at lower temperatures and can fuse when brought to physiological temperature. A supply of unassembled v- and t-SNAREs is needed for these intermediates to form, but not for the fusion that follows. These data imply that SNAREpins are the minimal machinery for cellular membrane fusion.

Publisher ID: 10-PLCB-RA-1847R2
DOI: 10.1371/journal.pcbi.1000829
PMC ID: 2891707
PubMed ID: 20585620
Copyright statement: Kasson et al. This is an open-access article distributed under the terms of the Creative Commons Attribution License, which permits unrestricted use, distribution, and reproduction in any medium, provided the original author and source are credited.