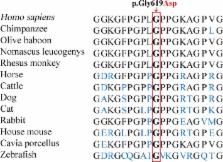 Focal segmental glomerulosclerosis (FSGS) is the most common glomerular histological lesion associated with high‐grade proteinuria and end‐stage renal disease. Histologically, FSGS is characterized by focal segmental sclerosis with foot process effacement. The aim of this study was to identify the disease‐causing mutation in a four‐generation Chinese family with FSGS. A novel missense mutation, c.1856G>A (p.Gly619Asp), in the collagen type IV alpha‐4 gene ( COL4A4) was identified in six patients and it co‐segregated with the disease in this family. The variant is predicted to be disease‐causing and results in collagen IV abnormalities. Our finding broadens mutation spectrum of the COL4A4 gene and extends the phenotypic spectrum of collagen IV nephropathies. Our study suggests that exome sequencing is a cost‐effective and efficient approach for identification of disease‐causing mutations in phenotypically complex or equivocal disorders. Timely screening for COL4A3/COL4A4 mutations in patients with familial FSGS may help both accurately diagnose and treat these patients.

Identification of PRRT2 as the causative gene of paroxysmal kinesigenic dyskinesias

Giovanni Frascà,  Laurence Heidet,  Federica Fasciolo … (2002)
COL4A3/COL4A4 mutations: From familial hematuria to autosomal-dominant or recessive Alport syndrome. Mutations of the type IV collagen COL4A5 gene cause X-linked Alport syndrome (ATS). Mutations of COL4A3 and COL4A4 have been reported both in autosomal-recessive and autosomal-dominant ATS, as well as in benign familial hematuria (BFH). In the latter conditions, however, clinical features are less defined, few mutations have been reported, and other genes and non-genetic factors may be involved. We analyzed 36 ATS patients for COL4A3 and COL4A4 mutations by polymerase chain reaction-single strand conformational polymorphism (PCR-SSCP) and direct sequencing. Sporadic patients who had tested negative for COL4A5 mutations were included with typical cases of autosomal recessive ATS to secure a better definition of the phenotype spectrum. We identified seven previously undescribed COL4A3 mutations: in two genetic compounds and three heterozygotes, and one in COL4A4. In agreement with the literature, some of the mutations of compound heterozygotes were associated with microhematuria in healthy heterozygous relatives. The mutations of heterozygous patients are likely dominant, since no change was identified in the second allele even by sequencing, and they are predicted to result in shortened or abnormal chains with a possible dominant-negative effect. In addition, both genes showed rare variants of unclear pathogenicity, and common polymorphisms that are shared in part with other populations. This study extends the mutation spectrum of COL4A3 and COL4A4 genes, and suggests a possible relationship between production of abnormal COL IV chains and dominant expression of a continuous spectrum of phenotypes, from ATS to BFH.

These authors contributed equally to this paper.