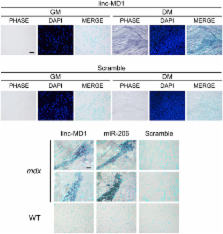 Recently, a new regulatory circuitry has been identified in which RNAs can crosstalk with each other by competing for shared microRNAs. Such competing endogenous RNAs (ceRNAs) regulate the distribution of miRNA molecules on their targets and thereby impose an additional level of post-transcriptional regulation. Here we identify a muscle-specific long noncoding RNA, linc-MD1, which governs the time of muscle differentiation by acting as a ceRNA in mouse and human myoblasts. Downregulation or overexpression of linc-MD1 correlate with retardation or anticipation of the muscle differentiation program, respectively. We show that linc-MD1 “sponges” miR-133 and miR-135 to regulate the expression of MAML1 and MEF2C, transcription factors that activate muscle-specific gene expression. Finally, we demonstrate that linc-MD1 exerts the same control over differentiation timing in human myoblasts, and that its levels are strongly reduced in Duchenne muscle cells. We conclude that the ceRNA network plays an important role in muscle differentiation. 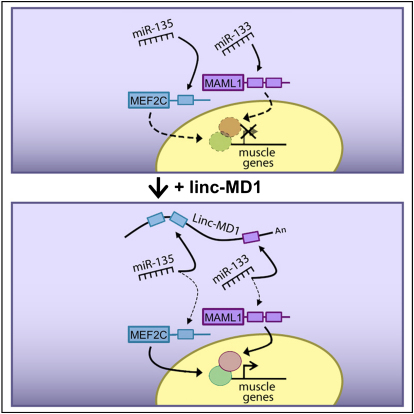 A long noncoding RNA, linc-MD1, governs muscle cell differentiation by competitively binding to microRNAs that target muscle-specific transcription factors. linc-MD1 functions not only as a decoy RNA but also as a precursor pri-microRNA.

Laura Poliseno,  Leonardo Salmena,  JiangWen Zhang … (2010)
The canonical role of messenger RNA (mRNA) is to deliver protein-coding information to sites of protein synthesis. However, given that microRNAs bind to RNAs, we hypothesized that RNAs possess a biological role in cancer cells that relies upon their ability to compete for microRNA binding and is independent of their protein-coding function. As a paradigm for the protein-coding-independent role of RNAs, we describe the functional relationship between the mRNAs produced by the PTEN tumour suppressor gene and its pseudogene (PTENP1) and the critical consequences of this interaction. We find that PTENP1 is biologically active as determined by its ability to regulate cellular levels of PTEN, and that it can exert a growth-suppressive role. We also show that PTENP1 locus is selectively lost in human cancer. We extend our analysis to other cancer-related genes that possess pseudogenes, such as oncogenic KRAS. Further, we demonstrate that the transcripts of protein coding genes such as PTEN are also biologically active. Together, these findings attribute a novel biological role to expressed pseudogenes, as they can regulate coding gene expression, and reveal a non-coding function for mRNAs.

Deepak Srivastava,  Eva Samal,  Yong Zhao (2005)
Gradients of signalling and transcription factors govern many aspects of embryogenesis, highlighting the need for spatiotemporal control of regulatory protein levels. MicroRNAs are phylogenetically conserved small RNAs that regulate the translation of target messenger RNAs, providing a mechanism for protein dose regulation. Here we show that microRNA-1-1 (miR-1-1) and miR-1-2 are specifically expressed in cardiac and skeletal muscle precursor cells. We found that the miR-1 genes are direct transcriptional targets of muscle differentiation regulators including serum response factor, MyoD and Mef2. Correspondingly, excess miR-1 in the developing heart leads to a decreased pool of proliferating ventricular cardiomyocytes. Using a new algorithm for microRNA target identification that incorporates features of RNA structure and target accessibility, we show that Hand2, a transcription factor that promotes ventricular cardiomyocyte expansion, is a target of miR-1. This work suggests that miR-1 genes titrate the effects of critical cardiac regulatory proteins to control the balance between differentiation and proliferation during cardiogenesis.

Yvonne Tay,  Lev M Kats,  Leonardo Salmena … (2011)
Here, we demonstrate that protein-coding RNA transcripts can crosstalk by competing for common microRNAs, with microRNA response elements as the foundation of this interaction. We have termed such RNA transcripts as competing endogenous RNAs (ceRNAs). We tested this hypothesis in the context of PTEN, a key tumor suppressor whose abundance determines critical outcomes in tumorigenesis. By a combined computational and experimental approach, we identified and validated endogenous protein-coding transcripts that regulate PTEN, antagonize PI3K/AKT signaling, and possess growth- and tumor-suppressive properties. Notably, we also show that these genes display concordant expression patterns with PTEN and copy number loss in cancers. Our study presents a road map for the prediction and validation of ceRNA activity and networks and thus imparts a trans-regulatory function to protein-coding mRNAs. Copyright © 2011 Elsevier Inc. All rights reserved.

These authors contributed equally to the work