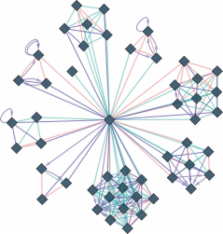 Summary: Cytoscape Web is a web-based network visualization tool–modeled after Cytoscape–which is open source, interactive, customizable and easily integrated into web sites. Multiple file exchange formats can be used to load data into Cytoscape Web, including GraphML, XGMML and SIF.

Availability and Implementation: Cytoscape Web is implemented in Flex/ActionScript with a JavaScript API and is freely available at http://cytoscapeweb.cytoscape.org/

Sabry Razick,  George Magklaras,  Ian M Donaldson (2008)
Background Interaction data for a given protein may be spread across multiple databases. We set out to create a unifying index that would facilitate searching for these data and that would group together redundant interaction data while recording the methods used to perform this grouping. Results We present a method to generate a key for a protein interaction record and a key for each participant protein. These keys may be generated by anyone using only the primary sequence of the proteins, their taxonomy identifiers and the Secure Hash Algorithm. Two interaction records will have identical keys if they refer to the same set of identical protein sequences and taxonomy identifiers. We define records with identical keys as a redundant group. Our method required that we map protein database references found in interaction records to current protein sequence records. Operations performed during this mapping are described by a mapping score that may provide valuable feedback to source interaction databases on problematic references that are malformed, deprecated, ambiguous or unfound. Keys for protein participants allow for retrieval of interaction information independent of the protein references used in the original records. Conclusion We have applied our method to protein interaction records from BIND, BioGrid, DIP, HPRD, IntAct, MINT, MPact, MPPI and OPHID. The resulting interaction reference index is provided in PSI-MITAB 2.5 format at . This index may form the basis of alternative redundant groupings based on gene identifiers or near sequence identity groupings.

Peer Bork,  S Hooper (2005)
Medusa is a Java application for visualizing and manipulating graphs of interaction, such as data from the STRING database. It features an intuitive user interface developed with the help of biologists. Medusa is optimized for accessing protein interaction data from STRING, but can be used for any type of graph from any scientific field.

Martin Klammer,  Erik L. L. Sonnhammer,  Sanjit Roopra (2008)
jSquid is a graph visualization tool for exploring graphs from protein-protein interaction or functional coupling networks. The tool was designed for the FunCoup web site, but can be used for any similar network exploring purpose. The program offers various visualization and graph manipulation techniques to increase the utility for the user. jSquid is available for direct usage and download at http://jSquid.sbc.su.se including source code under the GPLv3 license, and input examples. It requires Java version 5 or higher to run properly. erik.sonnhammer@sbc.su.se Supplementary data are available at Bioinformatics online.