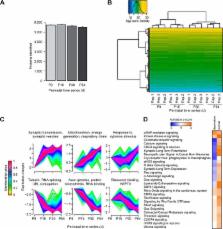 A global protein kinase and phosphatase interaction network in yeast.

A Breitkreutz,  H. Choi,  J. Sharom … (2010)
The interactions of protein kinases and phosphatases with their regulatory subunits and substrates underpin cellular regulation. We identified a kinase and phosphatase interaction (KPI) network of 1844 interactions in budding yeast by mass spectrometric analysis of protein complexes. The KPI network contained many dense local regions of interactions that suggested new functions. Notably, the cell cycle phosphatase Cdc14 associated with multiple kinases that revealed roles for Cdc14 in mitogen-activated protein kinase signaling, the DNA damage response, and metabolism, whereas interactions of the target of rapamycin complex 1 (TORC1) uncovered new effector kinases in nitrogen and carbon metabolism. An extensive backbone of kinase-kinase interactions cross-connects the proteome and may serve to coordinate diverse cellular responses.

Tracking cancer drugs in living cells by thermal profiling of the proteome.

Bernhard Kuster,  Craig T. Werner,  Marcus Bantscheff … (2014)
The thermal stability of proteins can be used to assess ligand binding in living cells. We have generalized this concept by determining the thermal profiles of more than 7000 proteins in human cells by means of mass spectrometry. Monitoring the effects of small-molecule ligands on the profiles delineated more than 50 targets for the kinase inhibitor staurosporine. We identified the heme biosynthesis enzyme ferrochelatase as a target of kinase inhibitors and suggest that its inhibition causes the phototoxicity observed with vemurafenib and alectinib. Thermal shifts were also observed for downstream effectors of drug treatment. In live cells, dasatinib induced shifts in BCR-ABL pathway proteins, including CRK/CRKL. Thermal proteome profiling provides an unbiased measure of drug-target engagement and facilitates identification of markers for drug efficacy and toxicity. Copyright © 2014, American Association for the Advancement of Science.