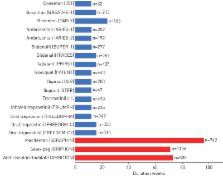 Until 20 years ago the treatment of pulmonary arterial hypertension (PAH) was based on case reports and small series, and was largely ineffectual. As a deeper understanding of the pathogenesis and pathophysiology of PAH evolved over the subsequent two decades, coupled with epidemiological studies defining the clinical and demographic characteristics of the condition, a renewed interest in treatment development emerged through collaborations between international experts, industry and regulatory agencies. These efforts led to the performance of robust, high-quality clinical trials of novel therapies that targeted putative pathogenic pathways, leading to the approval of more than 10 novel therapies that have beneficially impacted both the quality and duration of life. However, our understanding of PAH remains incomplete and there is no cure. Accordingly, efforts are now focused on identifying novel pathogenic pathways that may be targeted, and applying more rigorous clinical trial designs to better define the efficacy of these new potential treatments and their role in the management scheme. This article, prepared by a Task Force comprised of expert clinicians, trialists and regulators, summarises the current state of the art, and provides insight into the opportunities and challenges for identifying and assessing the efficacy and safety of new treatments for this challenging condition.

State of the art and research perspectives in clinical trial design and new therapies for pulmonary arterial hypertension http://ow.ly/VHQ030mfRxc

Inflammation and immunity in the pathogenesis of pulmonary arterial hypertension.

Marlene Rabinovitch, Christophe Guignabert, Marc Humbert … (2014)
This review summarizes an expanding body of knowledge indicating that failure to resolve inflammation and altered immune processes underlie the development of pulmonary arterial hypertension. The chemokines and cytokines implicated in pulmonary arterial hypertension that could form a biomarker platform are discussed. Pre-clinical studies that provide the basis for dysregulated immunity in animal models of the disease are reviewed. In addition, we present therapies that target inflammatory/immune mechanisms that are currently enrolling patients, and discuss others in development. We show how genetic and metabolic abnormalities are inextricably linked to dysregulated immunity and adverse remodeling in the pulmonary arteries.