Effects of an intrathecal TRPV1 antagonist, SB366791, on morphine-induced itch, body temperature, and antinociception in mice 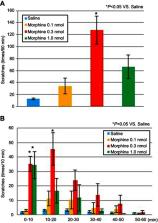 Each C57/BL6j mouse was intrathecally administered with one of the following solutions: morphine, SB366791 (as the TRPV1 antagonist), morphine + SB366791, saline, or vehicle. For each mouse, each instance of observed scratching behavior was counted, the body temperature was measured, and the nociceptive threshold was determined using the tail-immersion test.

SB366791 dose-dependently reduced the scratching behavior induced by the administration of morphine. SB366791 and the morphine + SB366791 groups did not manifest an increase in body temperature. Antinociceptive effects were observed to occur dose-dependently for morphine but not for SB366791. Compared with morphine alone, the administration of morphine + SB366791 did not reduce significant antinociceptive effects.

Eric M. Darling,  Gabrielle Palluconi,  Narender Gavva … (2008)
The vanilloid receptor TRPV1 has been identified as a molecular target for the treatment of pain associated with inflammatory diseases and cancer. Hence, TRPV1 antagonists have been considered for therapeutic evaluation in such diseases. During Phase I clinical trials with AMG 517, a highly selective TRPV1 antagonist, we found that TRPV1 blockade elicited marked, but reversible, and generally plasma concentration-dependent hyperthermia. Similar to what was observed in rats, dogs, and monkeys, hyperthermia was attenuated after repeated dosing of AMG 517 (at the highest dose tested) in humans during a second Phase I trial. However, AMG 517 administered after molar extraction (a surgical cause of acute pain) elicited long-lasting hyperthermia with maximal body temperature surpassing 40 degrees C, suggesting that TRPV1 blockade elicits undesirable hyperthermia in susceptible individuals. Mechanisms of AMG 517-induced hyperthermia were then studied in rats. AMG 517 caused hyperthermia by inducing tail skin vasoconstriction and increasing thermogenesis, which suggests that TRPV1 regulates vasomotor tone and metabolic heat production. In conclusion, these results demonstrate that: (a) TRPV1-selective antagonists like AMG 517 cannot be developed for systemic use as stand alone agents for treatment of pain and other diseases, (b) individual susceptibility influences magnitude of hyperthermia observed after TRPV1 blockade, and (c) TRPV1 plays a pivotal role as a molecular regulator for body temperature in humans.

Scott Simon,  Noritaka Imamachi,  Kyou-Sup Han … (2009)
The mechanisms that generate itch are poorly understood at both the molecular and cellular levels despite its clinical importance. To explore the peripheral neuronal mechanisms underlying itch, we assessed the behavioral responses (scratching) produced by s.c. injection of various pruritogens in PLCbeta3- or TRPV1-deficient mice. We provide evidence that at least 3 different molecular pathways contribute to the transduction of itch responses to different pruritogens: 1) histamine requires the function of both PLCbeta3 and the TRPV1 channel; 2) serotonin, or a selective agonist, alpha-methyl-serotonin (alpha-Me-5-HT), requires the presence of PLCbeta3 but not TRPV1, and 3) endothelin-1 (ET-1) does not require either PLCbeta3 or TRPV1. To determine whether the activity of these molecules is represented in a particular subpopulation of sensory neurons, we examined the behavioral consequences of selectively eliminating 2 nonoverlapping subsets of nociceptors. The genetic ablation of MrgprD(+) neurons that represent approximately 90% of cutaneous nonpeptidergic neurons did not affect the scratching responses to a number of pruritogens. In contrast, chemical ablation of the central branch of TRPV1(+) nociceptors led to a significant behavioral deficit for pruritogens, including alpha-Me-5-HT and ET-1, that is, the TRPV1-expressing nociceptor was required, whether or not TRPV1 itself was essential. Thus, TRPV1 neurons are equipped with multiple signaling mechanisms that respond to different pruritogens. Some of these require TRPV1 function; others use alternate signal transduction pathways.

The vanilloid receptor TRPV1 is tonically activated in vivo and involved in body temperature regulation.