Ejaculate Characteristics Depend on Social Environment in the Horse ( Equus caballus) 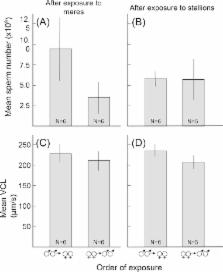 Sperm competition theory predicts semen characteristics to be affected by the social environment. We used the polygamous horse ( Equus caballus) to experimentally study within-subject plasticity in response to different social environments. Stallions were sequentially exposed, over a period of 8 weeks each, to other stallions and then singly to mares, or vice versa (in adjacent boxes separated by grills). Ejaculates were collected to determine semen characteristics. Highest sperm numbers were found in stallions that were first exposed to other stallions and then to mares, while lowest sperm numbers were observed in stallions that had been exposed to mares but not yet to other stallions. One of three sperm velocity measures (curvilinear velocity) was consistently elevated in stallions that were first exposed to stallions and then to mares. Sperm number after exposure to mares and curvilinear sperm velocity after exposure to stallions were both positively correlated to average blood testosterone levels during the corresponding period of exposure. We conclude that ejaculate characteristics are plastic traits affected by the social environment in horses.

Tommaso Pizzari,  Geoffrey G Parker (2010)
Sperm competition was identified in 1970 as a pervasive selective force in post-copulatory sexual selection that occurs when the ejaculates of different males compete to fertilise a given set of ova. Since then, sperm competition has been much studied both empirically and theoretically. Because sperm competition often favours large ejaculates, an important challenge has been to understand the evolution of strategies through which males invest in sperm production and economise sperm allocation to maximise reproductive success under competitive conditions. Sperm competition mechanisms vary greatly, depending on many factors including the level of sperm competition, space constraints in the sperm competition arena, male mating roles, and female influences on sperm utilisation. Consequently, theoretical models of ejaculate economics are complex and varied, often with apparently conflicting predictions. The goal of this review is to synthesise the theoretical basis of ejaculate economics under sperm competition, aiming to provide empiricists with categorised model assumptions and predictions. We show that apparent contradictions between older and newer models can often be reconciled and there is considerable consensus in the predictions generated by different models. We also discuss qualitative empirical support for some of these predictions, and detail quantitative matches between predictions and observations that exist in the yellow dung fly. We argue that ejaculate economic theory represents a powerful heuristic to explain the diversity in ejaculate traits at multiple levels: across species, across males and within individual males. Future progress requires greater understanding of sperm competition mechanisms, quantification of trade-offs between ejaculate allocation and numbers of matings gained, further knowledge of mechanisms of female sperm selection and their associated costs, further investigation of non-sperm ejaculate effects, and theoretical integration of pre- and post-copulatory episodes of sexual selection. © 2010 The Authors. Biological Reviews © 2010 Cambridge Philosophical Society.

John Kelly,  Michael D. Jennions,  Clint Kelly (2011)
Multiple mating or group spawning leads to post-copulatory sexual selection, which generally favours ejaculates that are more competitive under sperm competition. In four meta-analyses we quantify the evidence that sperm competition (SC) favours greater sperm number using data from studies of strategic ejaculation. Differential investment into each ejaculate emerges at the individual level if males exhibit phenotypic plasticity in ejaculate properties in response to the likely risk and/or intensity of sperm competition after a given mating. Over the last twenty years, a series of theoretical models have been developed that predict how ejaculate size will be strategically adjusted in relation to: (a) the number of immediate rival males, with a distinction made between 0 versus 1 rival ('risk' of SC) and 1 versus several rivals ('intensity' of SC); (b) female mating status (virgin or previously mated); and (c) female phenotypic quality (e.g. female size or condition). Some well-known studies have reported large adjustments in ejaculate size depending on the relevant social context and this has led to widespread acceptance of the claim that strategic sperm allocation occurs in response to each of these factors. It is necessary, however, to test each claim separately because it is easy to overlook studies with weak or negative findings. Compiling information on the variation in outcomes among species is potentially informative about the relevance of these assumptions in different taxa or mating systems. We found strong evidence that, on average, males transfer larger ejaculates to higher quality females. The effect of female mating status was less straightforward and depended on how ejaculate size was measured (i.e. use of proxy or direct measure). There is strong evidence that ejaculate size increased when males were exposed to a single rival, which is often described as a response to the risk of SC. There is, however, no evidence for the general prediction that ejaculate size decreases as the number of rivals increases from one to several males (i.e. in response to a higher intensity of SC which lowers the rate of return per sperm released). Our results highlight how meta-analysis can reveal unintentional biases in narrative literature reviews. We note that several assumptions of theoretical models can alter an outcome's predicted direction in a given species (e.g. the effect of female mating status depends on whether there is first- or last-male sperm priority). Many studies do not provide this background information and fail to make strong a priori predictions about the expected response of ejaculate size to manipulation of the mating context. Researchers should be explicit about which model they are testing to ensure that future meta-analyses can better partition studies into different categories, or control for continuous moderator variables. © 2011 The Authors. Biological Reviews © 2011 Cambridge Philosophical Society.

Julie K Desjardins,  Robert Montgomerie,  Niclas Kolm … (2009)
Sperm competition, the contest among ejaculates from rival males to fertilize ova of a female, is a common and powerful evolutionary force influencing ejaculate traits. During competitive interactions between ejaculates, longer and faster spermatozoa are expected to have an edge; however, to date, there has been mixed support for this key prediction from sperm competition theory. Here, we use the spectacular radiation of cichlid fishes from Lake Tanganyika to examine sperm characteristics in 29 closely related species. We provide phylogenetically robust evidence that species experiencing greater levels of sperm competition have faster-swimming sperm. We also show that sperm competition selects for increases in the number, size, and longevity of spermatozoa in the ejaculate of a male, and, contrary to expectations from theory, we find no evidence of trade-offs among sperm traits in an interspecific analysis. Also, sperm swimming speed is positively correlated with sperm length among, but not within, species. These different responses to sperm competition at intra- and interspecific levels provide a simple, powerful explanation for equivocal results from previous studies. Using phylogenetic analyses, we also reconstructed the probable evolutionary route of trait evolution in this taxon, and show that, in response to increases in the magnitude of sperm competition, the evolution of sperm traits in this clade began with the evolution of faster (thus, more competitive) sperm.

This work was supported by the Swiss Institute of Equine Medicine Research to DB ( http://ismequine.ch/wp/?lang=en). The funders had no role in study design, data collection and analysis, decision to publish, or preparation of the manuscript.