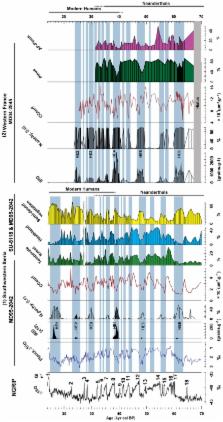 It has been proposed that a greater control and more extensive use of fire was one of the behavioral innovations that emerged in Africa among early Modern Humans, favouring their spread throughout the world and determining their eventual evolutionary success. We would expect, if extensive fire use for ecosystem management were a component of the modern human technical and cognitive package, as suggested for Australia, to find major disturbances in the natural biomass burning variability associated with the colonisation of Europe by Modern Humans.

Analyses of microcharcoal preserved in two deep-sea cores located off Iberia and France were used to reconstruct changes in biomass burning between 70 and 10 kyr cal BP. Results indicate that fire regime follows the Dansgaard-Oeschger climatic variability and its impacts on fuel load. No major disturbance in natural fire regime variability is observed at the time of the arrival of Modern Humans in Europe or during the remainder of the Upper Palaeolithic (40–10 kyr cal BP).

Results indicate that either Neanderthals and Modern humans did not influence fire regime or that, if they did, their respective influence was comparable at a regional scale, and not as pronounced as that observed in the biomass burning history of Southeast Asia.

Fire as an engineering tool of early modern humans.

Jake Z. Jacobs,  David Braun,  C. Meyer … (2009)
The controlled use of fire was a breakthrough adaptation in human evolution. It first provided heat and light and later allowed the physical properties of materials to be manipulated for the production of ceramics and metals. The analysis of tools at multiple sites shows that the source stone materials were systematically manipulated with fire to improve their flaking properties. Heat treatment predominates among silcrete tools at approximately 72 thousand years ago (ka) and appears as early as 164 ka at Pinnacle Point, on the south coast of South Africa. Heat treatment demands a sophisticated knowledge of fire and an elevated cognitive ability and appears at roughly the same time as widespread evidence for symbolic behavior.

Chris Stringer (2002)
The question of the mode of origin of modern humans (Homo sapiens) has dominated palaeoanthropological debate over the last decade. This review discusses the main models proposed to explain modern human origins, and examines relevant fossil evidence from Eurasia, Africa and Australasia. Archaeological and genetic data are also discussed, as well as problems with the concept of 'modernity' itself. It is concluded that a recent African origin can be supported for H. sapiens, morphologically, behaviourally and genetically, but that more evidence will be needed, both from Africa and elsewhere, before an absolute African origin for our species and its behavioural characteristics can be established and explained.

Tim Reynolds,  Michael I. Bird,  John Krigbaum … (2007)
Recent research in Europe, Africa, and Southeast Asia suggests that we can no longer assume a direct and exclusive link between anatomically modern humans and behavioral modernity (the 'human revolution'), and assume that the presence of either one implies the presence of the other: discussions of the emergence of cultural complexity have to proceed with greater scrutiny of the evidence on a site-by-site basis to establish secure associations between the archaeology present there and the hominins who created it. This paper presents one such case study: Niah Cave in Sarawak on the island of Borneo, famous for the discovery in 1958 in the West Mouth of the Great Cave of a modern human skull, the 'Deep Skull,' controversially associated with radiocarbon dates of ca. 40,000 years before the present. A new chronostratigraphy has been developed through a re-investigation of the lithostratigraphy left by the earlier excavations, AMS-dating using three different comparative pre-treatments including ABOX of charcoal, and U-series using the Diffusion-Absorption model applied to fragments of bones from the Deep Skull itself. Stratigraphic reasons for earlier uncertainties about the antiquity of the skull are examined, and it is shown not to be an 'intrusive' artifact. It was probably excavated from fluvial-pond-desiccation deposits that accumulated episodically in a shallow basin immediately behind the cave entrance lip, in a climate that ranged from times of comparative aridity with complete desiccation, to episodes of greater surface wetness, changes attributed to regional climatic fluctuations. Vegetation outside the cave varied significantly over time, including wet lowland forest, montane forest, savannah, and grassland. The new dates and the lithostratigraphy relate the Deep Skull to evidence of episodes of human activity that range in date from ca. 46,000 to ca. 34,000 years ago. Initial investigations of sediment scorching, pollen, palynomorphs, phytoliths, plant macrofossils, and starch grains recovered from existing exposures, and of vertebrates from the current and the earlier excavations, suggest that human foraging during these times was marked by habitat-tailored hunting technologies, the collection and processing of toxic plants for consumption, and, perhaps, the use of fire at some forest-edges. The Niah evidence demonstrates the sophisticated nature of the subsistence behavior developed by modern humans to exploit the tropical environments that they encountered in Southeast Asia, including rainforest.

Publisher ID: 09-PONE-RA-08367R1
DOI: 10.1371/journal.pone.0009157
PMC ID: 2820084
PubMed ID: 20161786
Copyright statement: Daniau et al. This is an open-access article distributed under the terms of the Creative Commons Attribution License, which permits unrestricted use, distribution, and reproduction in any medium, provided the original author and source are credited.