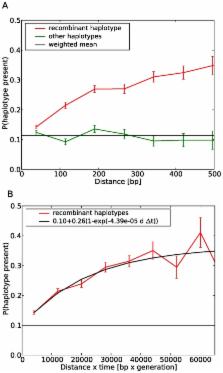 The evolutionary dynamics of HIV during the chronic phase of infection is driven by the host immune response and by selective pressures exerted through drug treatment. To understand and model the evolution of HIV quantitatively, the parameters governing genetic diversification and the strength of selection need to be known. While mutation rates can be measured in single replication cycles, the relevant effective recombination rate depends on the probability of coinfection of a cell with more than one virus and can only be inferred from population data. However, most population genetic estimators for recombination rates assume absence of selection and are hence of limited applicability to HIV, since positive and purifying selection are important in HIV evolution. Yet, little is known about the distribution of selection differentials between individual viruses and the impact of single polymorphisms on viral fitness. Here, we estimate the rate of recombination and the distribution of selection coefficients from time series sequence data tracking the evolution of HIV within single patients. By examining temporal changes in the genetic composition of the population, we estimate the effective recombination to be ρ = 1.4±0.6×10 −5 recombinations per site and generation. Furthermore, we provide evidence that the selection coefficients of at least 15% of the observed non-synonymous polymorphisms exceed 0.8% per generation. These results provide a basis for a more detailed understanding of the evolution of HIV. A particularly interesting case is evolution in response to drug treatment, where recombination can facilitate the rapid acquisition of multiple resistance mutations. With the methods developed here, more precise and more detailed studies will be possible as soon as data with higher time resolution and greater sample sizes are available.

Evolution, in viruses and other organisms, is the result of random genetic diversification by mutation or recombination and selection for survival. In most organisms, evolution is too slow to be observed directly and the evolutionary past has to be reconstructed from static snapshots of the population. This reconstruction requires simple models of evolution that typically neglect selection or recombination. In vigorously evolving organisms like HIV, such assumptions are questionable. However, HIV evolves rapidly enough that substantial evolution is observable during a chronic HIV infection within single patients. Using such time series data of evolution, we estimate the effective recombination rate of HIV (the rate of viral sex) to be similar to the mutation rate, rather than much larger as previously reported. We also study the strength of selection exerted on the virus by the immune system. We find that about 15% of the observed virus variants with mutations in the surface protein are favored and selected at a rate of 0.8% to 2% per virus replication cycle. Knowledge of the recombination rate and the strength of selection is essential for quantitative modeling and understanding of HIV evolution.

Q. Z. Yang,  Rasmus Nielsen (1998)
Several codon-based models for the evolution of protein-coding DNA sequences are developed that account for varying selection intensity among amino acid sites. The "neutral model" assumes two categories of sites at which amino acid replacements are either neutral or deleterious. The "positive-selection model" assumes an additional category of positively selected sites at which nonsynonymous substitutions occur at a higher rate than synonymous ones. This model is also used to identify target sites for positive selection. The models are applied to a data set of the V3 region of the HIV-1 envelope gene, sequenced at different years after the infection of one patient. The results provide strong support for variable selection intensity among amino acid sites The neutral model is rejected in favor of the positive-selection model, indicating the operation of positive selection in the region. Positively selected sites are found in both the V3 region and the flanking regions.

Victor Markowitz,  Alan Perelson,  Anthony Ho … (1996)
A new mathematical model was used to analyze a detailed set of human immunodeficiency virus-type 1 (HIV-1) viral load data collected from five infected individuals after the administration of a potent inhibitor of HIV-1 protease. Productively infected cells were estimated to have, on average, a life-span of 2.2 days (half-life t 1/2 = 1.6 days), and plasma virions were estimated to have a mean life-span of 0.3 days (t 1/2 = 0.24 days). The estimated average total HIV-1 production was 10.3 x 10(9) virions per day, which is substantially greater than previous minimum estimates. The results also suggest that the minimum duration of the HIV-1 life cycle in vivo is 1.2 days on average, and that the average HIV-1 generation time--defined as the time from release of a virion until it infects another cell and causes the release of a new generation of viral particles--is 2.6 days. These findings on viral dynamics provide not only a kinetic picture of HIV-1 pathogenesis, but also theoretical principles to guide the development of treatment strategies.

A coalescent-based method for detecting and estimating recombination from gene sequences.

Philip Awadalla,  Gil McVean,  Paul Fearnhead (2002)
Determining the amount of recombination in the genealogical history of a sample of genes is important to both evolutionary biology and medical population genetics. However, recurrent mutation can produce patterns of genetic diversity similar to those generated by recombination and can bias estimates of the population recombination rate. Hudson 2001 has suggested an approximate-likelihood method based on coalescent theory to estimate the population recombination rate, 4N(e)r, under an infinite-sites model of sequence evolution. Here we extend the method to the estimation of the recombination rate in genomes, such as those of many viruses and bacteria, where the rate of recurrent mutation is high. In addition, we develop a powerful permutation-based method for detecting recombination that is both more powerful than other permutation-based methods and robust to misspecification of the model of sequence evolution. We apply the method to sequence data from viruses, bacteria, and human mitochondrial DNA. The extremely high level of recombination detected in both HIV1 and HIV2 sequences demonstrates that recombination cannot be ignored in the analysis of viral population genetic data.

Publisher ID: 09-PLCB-RA-0882R3
DOI: 10.1371/journal.pcbi.1000660
PMC ID: 2813257
PubMed ID: 20126527
Copyright statement: This is an open-access article distributed under the terms of the Creative Commons Public Domain declaration which stipulates that, once placed in the public domain, this work may be freely reproduced, distributed, transmitted, modified, built upon, or otherwise used by anyone for any lawful purpose.