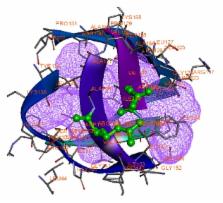 Current combination therapy of PEG-INF and ribavirin against the Hepatitis C Virus (HCV) genotype-1 infections is ineffective in maintaining sustained viral response in 50% of the infection cases. New compounds in the form of protease inhibitors can complement the combination therapy. Asunaprevir is new to the drug regiment as the NS3-4A protease inhibitor, but it is susceptible to two mutations, namely, R155K and D168A in the protein. Thus, in our study, we sought to evaluate Andrographolide, a labdane-diterpenoid from the Andrographis paniculata plant as an effective compound for inhibiting the NS3-4A protease as well as its concomitant drug-resistant mutants by using molecular docking and dynamic simulations. Our study shows that Andrographolide has best docking scores of −15.0862, −15.2322, and −13.9072 compared to those of Asunaprevir −3.7159, −2.6431, and −5.4149 with wild-type R155K and D168A mutants, respectively. Also, as shown in the MD simulations, the compound was good in binding the target proteins and maintains strong bonds causing very less to negligible perturbation in the protein backbone structures. Our results validate the susceptibility of Asunaprevir to protein variants as seen from our docking studies and trajectory period analysis. Therefore, from our study, we hope to add one more option in the drug regiment to tackle drug resistance in HCV infections.

D Lavanchy (2011)
More than 20 years after the discovery of the hepatitis C virus (HCV), it is now well established that HCV is of global importance affecting all countries, leading to a major global health problem that requires widespread active interventions for its prevention and control. Chronic hepatitis C was linked to the development of cirrhosis and hepatocellular carcinoma in many areas of the world. Current epidemiological assessments have identified complex patterns with highly variable local prevalence rates between countries and within countries. HCV infection patterns have not significantly changed in most parts of the world since 1997, when first analyzed, partly due to the lack of new and more accurate data. The assessment of the national HCV prevalence and transmission modes should be completed to enable national authorities to prioritize preventive measures and to make the most appropriate use of available resources. The 'patchy' epidemiological situation in some areas will continue to complicate the task of the establishment of global, regional and national base line data. The present assessment finds a global prevalence of 2.35%, affecting 160 million chronically infected individuals. There is an urgent need for more accurate Information on the costs and burden of HCV to society. Twenty-one year after the discovery of HCV, the assessment is far from being complete and little progress has been made in the past 10 years in many countries. In some countries significant increases have been reported and this may also apply to countries were insufficient data exist. A safe and efficient vaccine against HCV is urgently needed. © 2011 The Author. Clinical Microbiology and Infection © 2011 European Society of Clinical Microbiology and Infectious Diseases.

C Lipinski (2004)
Citations in CAS SciFinder to the rule-of-five (RO5) publication will exceed 1000 by year-end 2004. Trends in the RO5 literature explosion that can be discerned are the further definitions of drug-like. This topic is explored in terms of drug-like physicochemical features, drug-like structural features, a comparison of drug-like and non-drug-like in drug discovery and a discussion of how drug-like features relate to clinical success. Physicochemical features of CNS drugs and features related to CNS blood-brain transporter affinity are briefly reviewed. Recent literature on features of non-oral drugs is reviewed and how features of lead-like compounds differ from those of drug-like compounds is discussed. Most recently, partly driven by NIH roadmap initiatives, considerations have arisen as to what tool-like means in the search for chemical tools to probe biology space. All these topics frame the scope of this short review/perspective.: © 2004 Elsevier Ltd . All rights reserved.