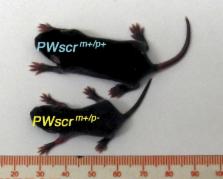 Prader-Willi syndrome (PWS [MIM 176270]) is a neurogenetic disorder characterized by decreased fetal activity, muscular hypotonia, failure to thrive, short stature, obesity, mental retardation, and hypogonadotropic hypogonadism. It is caused by the loss of function of one or more imprinted, paternally expressed genes on the proximal long arm of chromosome 15. Several potential PWS mouse models involving the orthologous region on chromosome 7C exist. Based on the analysis of deletions in the mouse and gene expression in PWS patients with chromosomal translocations, a critical region ( PWScr) for neonatal lethality, failure to thrive, and growth retardation was narrowed to the locus containing a cluster of neuronally expressed MBII-85 small nucleolar RNA (snoRNA) genes. Here, we report the deletion of PWScr. Mice carrying the maternally inherited allele ( PWScr m−/p+ ) are indistinguishable from wild-type littermates. All those with the paternally inherited allele ( PWScr m+/p− ) consistently display postnatal growth retardation, with about 15% postnatal lethality in C57BL/6, but not FVB/N crosses. This is the first example in a multicellular organism of genetic deletion of a C/D box snoRNA gene resulting in a pronounced phenotype.

Prader-Willi syndrome, or PWS, is a complex neurogenetic disorder and the most common genetic cause of life-threatening childhood obesity. Newborns have poor muscle tone, making suckling difficult, which leads to poor weight gain. After infancy, they experience extreme hunger, leading to obesity. Other symptoms include short stature, mental retardation, and often infertility. In PWS patients, a complex set of genes on the paternal chromosome 15 (in the PWS region) is missing or unexpressed. In an attempt to understand this disorder, various protein-coding genes in this region have been deleted in mice, but none of the resulting phenotypes consistently correlated with the human disease. This region also contains a cluster of genes that encode functional non-protein-coding RNAs. We deleted specifically the MBII-85 small nucleolar RNA (snoRNA) gene cluster on the parental mouse chromosome, which did not affect expression of any of the other snoRNA or protein-coding genes in the PWS region. These mice consistently displayed postnatal growth retardation starting from day 5 to 6, low postnatal lethality only in certain genetic backgrounds (<15%), and no adolescent obesity. Thus, this mouse model, with the deletion of a small, brain-specific non-protein-coding RNA, should prove useful for teasing out the various molecular pathologies of PWS.

Shivendra Kishore, Stefan Stamm (2006)
The Prader-Willi syndrome is a congenital disease that is caused by the loss of paternal gene expression from a maternally imprinted region on chromosome 15. This region contains a small nucleolar RNA (snoRNA), HBII-52, that exhibits sequence complementarity to the alternatively spliced exon Vb of the serotonin receptor 5-HT(2C)R. We found that HBII-52 regulates alternative splicing of 5-HT(2C)R by binding to a silencing element in exon Vb. Prader-Willi syndrome patients do not express HBII-52. They have different 5-HT(2C)R messenger RNA (mRNA) isoforms than healthy individuals. Our results show that a snoRNA regulates the processing of an mRNA expressed from a gene located on a different chromosome, and the results indicate that a defect in pre-mRNA processing contributes to the Prader-Willi syndrome.

Tamás Kiss (2002)
Small nucleolar RNAs represent an abundant, evolutionarily ancient group of noncoding RNAs which possess impressively diverse functions ranging from 2'-O-methylation and pseudouridylation of various classes of RNAs, through nucleolytic processing of rRNAs to the synthesis of telomeric DNA.

J Brosius, M Kiefmann, Jean-Pierre Bachellerie … (2000)
We have identified three C/D-box small nucleolar RNAs (snoRNAs) and one H/ACA-box snoRNA in mouse and human. In mice, all four snoRNAs (MBII-13, MBII-52, MBII-85, and MBI-36) are exclusively expressed in the brain, unlike all other known snoRNAs. Two of the human RNA orthologues (HBII-52 and HBI-36) share this expression pattern, and the remainder, HBII-13 and HBII-85, are prevalently expressed in that tissue. In mice and humans, the brain-specific H/ACA box snoRNA (MBI-36 and HBI-36, respectively) is intron-encoded in the brain-specific serotonin 2C receptor gene. The three human C/D box snoRNAs map to chromosome 15q11-q13, within a region implicated in the Prader-Willi syndrome (PWS), which is a neurogenetic disease resulting from a deficiency of paternal gene expression. Unlike other C/D box snoRNAs, two snoRNAs, HBII-52 and HBII-85, are encoded in a tandemly repeated array of 47 or 24 units, respectively. In mouse the homologue of HBII-52 is processed from intronic portions of the tandem repeats. Interestingly, these snoRNAs were absent from the cortex of a patient with PWS and from a PWS mouse model, demonstrating their paternal imprinting status and pointing to their potential role in the etiology of PWS. Despite displaying hallmarks of the two families of ubiquitous snoRNAs that guide 2'-O-ribose methylation and pseudouridylation of rRNA, respectively, they lack any telltale rRNA complementarity. Instead, brain-specific C/D box snoRNA HBII-52 has an 18-nt phylogenetically conserved complementarity to a critical segment of serotonin 2C receptor mRNA, pointing to a potential role in the processing of this mRNA.