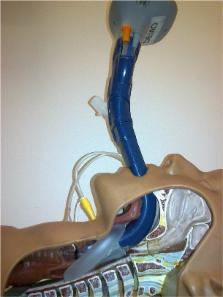 Super-obese patients are at increased risk of difficult mask ventilation and difficult intubation. Therefore, devices that allow for simultaneous ventilation/oxygenation during attempts to visualize the entrance to the larynx, increase patient safety. TotalTrack video intubating laryngeal mask is a new device that allows for ventilation during intubation efforts.

In all cases in the TotalTrack group, the Cormack-Lehane score was 1, ventilation and intubation was successful in 11/12 patients. No hypoxia during intubation efforts was recorded. No serious complications of use of TotalTrack were observed. In the Macintosh blade laryngoscope group, all patients were intubated, but the Cormack-Lehane score was 2 in four cases, and 3 in three cases.

TotalTrack video intubating laryngeal mask is a device that allows for better visualization of the larynx compared to the standard Macintosh blade laryngoscope, it provides effective ventilation/oxygenation and intubation in super-obese patients.

High body mass index is a weak predictor for difficult and failed tracheal intubation: a cohort study of 91,332 consecutive patients scheduled for direct laryngoscopy registered in the Danish Anesthesia Database.

Jacob Astrup,  Lars Lundstrøm,  Charlotte Rosenstock … (2009)
Previous studies have failed to detect high body mass index (BMI) as a risk factor for difficult tracheal intubation (DTI). BMI was investigated as a risk factor for DTI in patients planned for direct laryngoscopy. A cohort of 91,332 consecutive patients planned for intubation by direct laryngoscopy was retrieved from the Danish Anesthesia Database. A four-point scale to grade the tracheal intubation was used. Age, sex, American Society of Anesthesiologists physical status classification, priority of surgery, history of previous DTI, modified Mallampati-score, use of neuromuscular blocker, and BMI were retrieved. Logistic regression to assess whether BMI was associated with DTI was performed. The frequency of DTI was 5.2% (95% confidence interval [CI] 5.0-5.3). In multivariate analyses adjusted for other significant covariates, BMI of 35 or more was a risk for DTI with an odds ratio of 1.34 (95% CI 1.19-1.51, P < 0.0001). As a stand alone test, BMI of 35 or more predicted DTI with a sensitivity of 7.5% (95% CI 7.3-7.7%) and with a predictive value of a positive test of 6.4% (95% CI 6.3-6.6%). BMI as a continuous covariate was a risk for failed intubation with an odds ratio of 1.031 (95% CI 1.002-1.061, P < 0.04). High BMI is a weak but statistically significant predictor of difficult and failed intubation and may be more appropriate than weight in multivariate models of prediction of DTI.

Paolo Pelosi,  Cesare Gregoretti (2010)
Obesity is a metabolic disease that is on the increase all over the world. Up to 35% of the population in North America and 15-20% in Europe can be considered obese. Since these patients are characterised by several systemic physiopathological alterations, the perioperative management may present some problems, mainly related to their respiratory system. Body mass is an important determinant of respiratory function before and during anaesthesia not only in morbidly but also in moderately obese patients. These can manifest as (a) reduced lung volume with increased atelectasis; (b)derangements in respiratory system, lung and chest wall compliance and increased resistance; and (c) moderate to severe hypoxaemia. These physiological alterations are more marked in obese patients with hypercapnic syndrome or obstructive sleep apnoea syndrome. The suggested perioperative ventilation management includes (a) awake and/or facilitated endotracheal intubation by using a video-laryngoscope; (b) tidal volume of 6-10 ml kg(-1) ideal body weight, increasing respiratory rate to maintain physiological PaCO2, while avoiding intrinsic positive end-expiratory pressure (PEEPi); and (c) a recruitment manoeuvre (35-55 cmH2O for 6 s) followed by the application of an end-expiratory pressure (PEEP) of 10 cmH2O. The recruitment manoeuvre should always be performed only when a volemic and haemodynamic stabilisation is reached after induction of anaesthesia. In the postoperative period, beach chair position, aggressive physiotherapy, noninvasive respiratory support and short-term recovery in intermediate critical care units with care of fluid management and pain may be useful to reduce pulmonary complications.