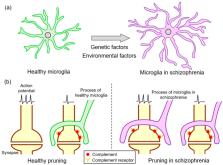 Schizophrenia is a common psychiatric disorder that usually develops during adolescence and young adulthood. Since genetic and environmental factors are involved in the disease, the molecular status of the pathology of schizophrenia differs across patients. Recent genetic studies have focused on the association between schizophrenia and the immune system, especially microglia–synapse interactions. Microglia physiologically eliminate unnecessary synapses during the developmental period. The overactivation of synaptic pruning by microglia is involved in the pathology of brain disease. This paper focuses on the synaptic pruning function and its molecular machinery and introduces the hypothesis that excessive synaptic pruning plays a role in the development of schizophrenia. Finally, we suggest a strategy for diagnosis and medication based on modulation of the interaction between microglia and synapses. This review provides updated information on the involvement of the immune system in schizophrenia and proposes novel insights regarding diagnostic and therapeutic strategies for this disease.

Stephan Ripke, Benjamin M. Neale, Aiden Corvin … (2014)
Summary Schizophrenia is a highly heritable disorder. Genetic risk is conferred by a large number of alleles, including common alleles of small effect that might be detected by genome-wide association studies. Here, we report a multi-stage schizophrenia genome-wide association study of up to 36,989 cases and 113,075 controls. We identify 128 independent associations spanning 108 conservatively defined loci that meet genome-wide significance, 83 of which have not been previously reported. Associations were enriched among genes expressed in brain providing biological plausibility for the findings. Many findings have the potential to provide entirely novel insights into aetiology, but associations at DRD2 and multiple genes involved in glutamatergic neurotransmission highlight molecules of known and potential therapeutic relevance to schizophrenia, and are consistent with leading pathophysiological hypotheses. Independent of genes expressed in brain, associations were enriched among genes expressed in tissues that play important roles in immunity, providing support for the hypothesized link between the immune system and schizophrenia.

Axel Nimmerjahn, Frank Kirchhoff, Fritjof Helmchen (2005)
Microglial cells represent the immune system of the mammalian brain and therefore are critically involved in various injuries and diseases. Little is known about their role in the healthy brain and their immediate reaction to brain damage. By using in vivo two-photon imaging in neocortex, we found that microglial cells are highly active in their presumed resting state, continually surveying their microenvironment with extremely motile processes and protrusions. Furthermore, blood-brain barrier disruption provoked immediate and focal activation of microglia, switching their behavior from patroling to shielding of the injured site. Microglia thus are busy and vigilant housekeepers in the adult brain.

Synaptic pruning by microglia is necessary for normal brain development.

Rosa Paolicelli, Giulia Bolasco, Francesca Pagani … (2011)
Microglia are highly motile phagocytic cells that infiltrate and take up residence in the developing brain, where they are thought to provide a surveillance and scavenging function. However, although microglia have been shown to engulf and clear damaged cellular debris after brain insult, it remains less clear what role microglia play in the uninjured brain. Here, we show that microglia actively engulf synaptic material and play a major role in synaptic pruning during postnatal development in mice. These findings link microglia surveillance to synaptic maturation and suggest that deficits in microglia function may contribute to synaptic abnormalities seen in some neurodevelopmental disorders.