Proof of Concept, Randomized, Placebo-Controlled Study of the Effect of Simvastatin on the Course of Age-Related Macular Degeneration 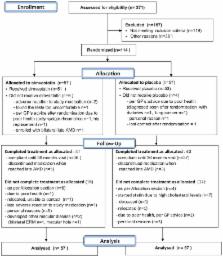 HMG Co-A reductase inhibitors are ubiquitous in our community yet their potential role in age-related macular degeneration (AMD) remains to be determined.

Objectives: To evaluate the effect of simvastatin on AMD progression and the effect modification by polymorphism in apolipoprotein E ( ApoE) and complement factor H ( CFH) genes. Design: A proof of concept double-masked randomized controlled study. Participants: 114 participants aged 53 to 91 years, with either bilateral intermediate AMD or unilateral non-advanced AMD (with advanced AMD in fellow eye), BCVA≥20/60 in at least one eye, and a normal lipid profile. Intervention: Simvastatin 40 mg/day or placebo, allocated 1∶1. Main outcome measures: Progression of AMD either to advanced AMD or in severity of non-advanced AMD. Results. The cumulative AMD progression rates were 70% in the placebo and 54% in the simvastatin group. Intent to treat multivariable logistic regression analysis, adjusted for age, sex, smoking and baseline AMD severity, showed a significant 2-fold decrease in the risk of progression in the simvastatin group: OR 0.43 (0.18–0.99), p = 0.047. Post-hoc analysis stratified by baseline AMD severity showed no benefit from treatment in those who had advanced AMD in the fellow eye before enrolment: OR 0.97 (0.27–3.52), p = 0.96, after adjusting for age, sex and smoking. However, there was a significant reduction in the risk of progression in the bilateral intermediate AMD group compared to placebo [adjusted OR 0.23 (0.07–0.75), p = 0.015]. The most prominent effect was observed amongst those who had the CC ( Y402H) at risk genotype of the CFH gene [OR 0.08 (0.02–0.45), p = 0.004]. No evidence of harm from simvastatin intervention was detected.

Simvastatin may slow progression of non-advanced AMD, especially for those with the at risk CFH genotype CC ( Y402H). Further exploration of the potential use of statins for AMD, with emphasis on genetic subgroups, is warranted.

A Bird,  N Bressler,  S B Bressler … (2015)
A common detection and classification system is needed for epidemiologic studies of age-related maculopathy (ARM). Such a grading scheme for ARM is described in this paper. ARM is defined as a degenerative disorder in persons > or = 50 years of age characterized on grading of color fundus transparencies by the presence of the following abnormalities in the macular area: soft drusen > or = 63 microns, hyperpigmentation and/or hypopigmentation of the retinal pigment epithelium (RPE), RPE and associated neurosensory detachment, (peri)retinal hemorrhages, geographic atrophy of the RPE, or (peri)retinal fibrous scarring in the absence of other retinal (vascular) disorders. Visual acuity is not used to define the presence of ARM. Early ARM is defined as the presence of drusen and RPE pigmentary abnormalities described above; late ARM is similar to age-related macular degeneration (AMD) and includes dry AMD (geographic atrophy of the RPE in the absence of neovascular AMD) or neovascular AMD (RPE detachment, hemorrhages, and/or scars as described above). Methods to take and grade fundus transparencies are described.

Ronald Klein,  Susan B Bressler,  Angenee C. Milton … (2005)
To develop a simplified clinical scale defining risk categories for development of advanced age-related macular degeneration (AMD). Following development of a detailed scale for individual eyes based on gradings of fundus photographs in the Age-Related Eye Disease Study, rates of progression to advanced AMD were assessed in cross-tabulations of presence or absence in each eye of 2 easily identified retinal abnormalities, drusen and pigment abnormalities. Large drusen and any pigment changes were particularly predictive of developing advanced AMD. The scoring system developed for patients assigns to each eye 1 risk factor for the presence of 1 or more large (> or = 125 microm, width of a large vein at disc margin) drusen and 1 risk factor for the presence of any pigment abnormality. Risk factors are summed across both eyes, yielding a 5-step scale (0-4) on which the approximate 5-year risk of developing advanced AMD in at least one eye increases in this easily remembered sequence: 0 factors, 0.5%; 1 factor, 3%; 2 factors, 12%; 3 factors, 25%; and 4 factors, 50%. For persons with no large drusen, presence of intermediate drusen in both eyes is counted as 1 risk factor. This simplified scale provides convenient risk categories for development of advanced AMD that can be determined by clinical examination or by less demanding photographic procedures than used in the Age-Related Eye Disease Study.

Angenee C. Milton,  Mao-Yin Lee,  Ronald Klein … (2005)
To develop a fundus photographic severity scale for age-related macular degeneration (AMD). In the Age-Related Eye Disease Study, stereoscopic color fundus photographs were taken at baseline, at the 2-year follow-up visit, and annually thereafter. Photographs were graded for drusen characteristics (size, type, area), pigmentary abnormalities (increased pigment, depigmentation, geographic atrophy), and presence of abnormalities characteristic of neovascular AMD (retinal pigment epithelial detachment, serous or hemorrhagic sensory retinal detachment, subretinal or sub-retinal pigment epithelial hemorrhage, subretinal fibrous tissue). Advanced AMD was defined as presence of 1 or more neovascular AMD abnormalities, photocoagulation for AMD, or geographic atrophy involving the center of the macula. We explored associations among right eyes of 3212 participants between severity of drusen characteristics and pigmentary abnormalities at baseline and development of advanced AMD within 5 years of follow-up. A 9-step severity scale that combines a 6-step drusen area scale with a 5-step pigmentary abnormality scale was developed, on which the 5-year risk of advanced AMD increased progressively from less than 1% in step 1 to about 50% in step 9. Among the 334 eyes that had at least a 3-step progression on the scale between the baseline and 5-year visits, almost half showed stepwise progression through intervening severity levels at intervening visits. Replicate gradings showed agreement within 1 step on the scale in 87% of eyes. The scale provides convenient risk categories and has acceptable reproducibility. Progression along it may prove to be useful as a surrogate for progression to advanced AMD.

Competing Interests: Co-author Paul Baird is a PLOS ONE Editorial Board member. This does not alter the authors' adherence to all the PLOS ONE policies on sharing data and materials.

This work was supported by grants from the Ian Potter Foundation, John Reid Charitable Trust and Royal Victorian Eye and Ear Hospital. Merck Sharp and Dohme supplied the active simvastatin and placebo medication. The National Health and Medical Research Council (NHMRC) supported the study through a Centre for Clinical Research Excellence award to CERA(#529923), a Practitioner Fellowship (#529905) to RHG and a Senior Research Fellowship (#1028444) to PNB. LDR was supported by the Wagstaff Fellowship. CERA receives operational infrastructure from the Victorian Government. CERA is a recepient of the NHMRC award "Centre for Clinical Research Excellence" # 529923. The funders had no role in study design, data collection and analysis, decision to publish, or preparation of the manuscript.