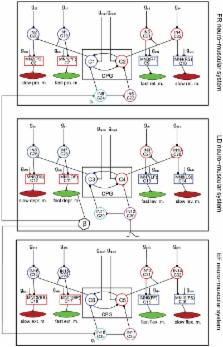 Stop and start of stepping are two basic actions of the musculo-skeletal system of a leg. Although they are basic phenomena, they require the coordinated activities of the leg muscles. However, little is known of the details of how these activities are generated by the interactions between the local neuronal networks controlling the fast and slow muscle fibres at the individual leg joints. In the present work, we aim at uncovering some of those details using a suitable neuro-mechanical model. It is an extension of the model in the accompanying paper and now includes all three antagonistic muscle pairs of the main joints of an insect leg, together with their dedicated neuronal control, as well as common inhibitory motoneurons and the residual stiffness of the slow muscles. This model enabled us to study putative processes of intra-leg coordination during stop and start of stepping. We also made use of the effects of sensory signals encoding the position and velocity of the leg joints. Where experimental observations are available, the corresponding simulation results are in good agreement with them. Our model makes detailed predictions as to the coordination processes of the individual muscle systems both at stop and start of stepping. In particular, it reveals a possible role of the slow muscle fibres at stop in accelerating the convergence of the leg to its steady-state position. These findings lend our model physiological relevance and can therefore be used to elucidate details of the stop and start of stepping in insects, and perhaps in other animals, too.

Neural control of unloaded leg posture and of leg swing in stick insect, cockroach, and mouse differs from that in larger animals.

Scott L Hooper (corresponding) ,  Christoph Guschlbauer,  Marcus Blümel … (2009)
Stick insect (Carausius morosus) leg muscles contract and relax slowly. Control of stick insect leg posture and movement could therefore differ from that in animals with faster muscles. Consistent with this possibility, stick insect legs maintained constant posture without leg motor nerve activity when the animals were rotated in air. That unloaded leg posture was an intrinsic property of the legs was confirmed by showing that isolated legs had constant, gravity-independent postures. Muscle ablation experiments, experiments showing that leg muscle passive forces were large compared with gravitational forces, and experiments showing that, at the rest postures, agonist and antagonist muscles generated equal forces indicated that these postures depended in part on leg muscles. Leg muscle recordings showed that stick insect swing motor neurons fired throughout the entirety of swing. To test whether these results were specific to stick insect, we repeated some of these experiments in cockroach (Periplaneta americana) and mouse. Isolated cockroach legs also had gravity-independent rest positions and mouse swing motor neurons also fired throughout the entirety of swing. These data differ from those in human and horse but not cat. These size-dependent variations in whether legs have constant, gravity-independent postures, in whether swing motor neurons fire throughout the entirety of swing, and calculations of how quickly passive muscle force would slow limb movement as limb size varies suggest that these differences may be caused by scaling. Limb size may thus be as great a determinant as phylogenetic position of unloaded limb motor control strategy.

A neuromechanical model explaining forward and backward stepping in the stick insect.

S Daun-Gruhn,  Ronald Toth,  S Knops (2012)
The mechanism underlying the generation of stepping has been the object of intensive studies. Stepping involves the coordinated movement of different leg joints and is, in the case of insects, produced by antagonistic muscle pairs. In the stick insect, the coordinated actions of three such antagonistic muscle pairs produce leg movements and determine the stepping pattern of the limb. The activity of the muscles is controlled by the nervous system as a whole and more specifically by local neuronal networks for each muscle pair. While many basic properties of these control mechanisms have been uncovered, some important details of their interactions in various physiological conditions have so far remained unknown. In this study, we present a neuromechanical model of the coupled protractor-retractor and levator-depressor neuromuscular systems and use it to elucidate details of their coordinated actions during forward and backward walking. The switch from protraction to retraction is evoked at a critical angle of the femur during downward movement. This angle represents a sensory input that integrates load, motion, and ground contact. Using the model, we can make detailed suggestions as to how rhythmic stepping might be generated by the central pattern generators of the local neuronal networks, how this activity might be transmitted to the corresponding motoneurons, and how the latter might control the activity of the related muscles. The entirety of these processes yields the coordinated interaction between neuronal and mechanical parts of the system. Moreover, we put forward a mechanism by which motoneuron activity could be modified by a premotor network and suggest that this mechanism might serve as a basis for fast adaptive behavior, like switches between forward and backward stepping, which occur, for example, during curve walking, and especially sharp turning, of insects.

Role of local nonspiking interneurons in the generation of rhythmic motor activity in the stick insect.

This work was supported by DFG Emmy-Noether Programme ( http://www.dfg.de/en/research_funding/programmes/individual/emmy_noether/index.html). The funders had no role in study design, data collection and analysis, decision to publish, or preparation of the manuscript.