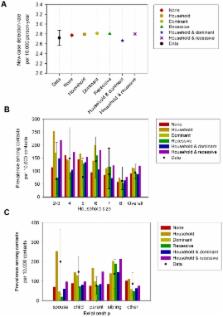 We used a microsimulation model, parameterizing it with data from over 20,000 contacts of leprosy patients in Bangladesh. We simulated six mechanisms producing heterogeneity in susceptibility: (1) susceptibility was allocated at random to persons (i.e. no additional mechanism), (2) a household factor, (3, 4) a genetic factor (dominant or recessive), or (5, 6) half a household factor and half genetic. We further assumed that a fraction of 5%, 10%, and 20% of the population was susceptible, leading to a total of 18 scenarios to be fitted to the data. We obtained an acceptable fit for each of the six mechanisms, thereby excluding none of the possible underlying mechanisms for heterogeneity of susceptibility to leprosy. However, the distribution of leprosy among contacts did differ between mechanisms, and predicted trends in the declining leprosy case detection were dependent on the assumed mechanism, with genetic-based susceptibility showing the slowest decline. Clustering of leprosy within households is partially caused by an increased transmission within households independent of the leprosy susceptibility mechanism. Even a large and detailed data set on contacts of leprosy patients could not unequivocally reveal the mechanism most likely responsible for heterogeneity in leprosy susceptibility.

Linda Oskam,  David Pahan,   … (2008)
To determine the effectiveness of chemoprophylaxis using a single dose of rifampicin to prevent leprosy in close contacts. Single centre, double blind, cluster randomised, placebo controlled trial. Leprosy control programme in two districts of northwest Bangladesh with a population of more than four million. 28,092 close contacts of 1037 patients with newly diagnosed leprosy. 21,711 contacts fulfilled the study requirements. A single dose of rifampicin or placebo given to close contacts in the second month of starting the index patient's treatment, with follow-up for four years. Development of clinical leprosy. 18,869 of the 21,711 contacts (86.9%) were followed-up at four years. Ninety one of 9452 contacts in the placebo group and 59 of 9417 in the rifampicin group had developed leprosy. The overall reduction in incidence of leprosy using a single dose of rifampicin in the first two years was 57% (95% confidence interval 33% to 72%). The groups did not differ between two and four years. The overall number needed to treat (NNT) to prevent a single case of leprosy among contacts was 297 (95% confidence interval 176 to 537). Differences were found between subgroups at two years, both in reduction of incidence and in NNT. A single dose of rifampicin given to contacts of patients with newly diagnosed leprosy is effective at preventing the development of clinical leprosy at two years. The effect was maintained, but no difference was seen between the placebo and rifampicin groups beyond two years. Current Controlled Trials ISRCTN61223447 [controlled-trials.com].

Inequality and leprosy in Northeast Brazil: an ecological study.

Guilherme Werneck,  Ligia Kerr,  Maurício Barreto … (2004)
Leprosy is an important public health problem in many developing countries and many features of its determinants are still obscure. To investigate whether the incidence of leprosy is related to certain environmental and socioeconomic determinants, an ecological study was undertaken in 165 municipalities of the state of Ceará, Brazil. Social, economic, education, sanitation, demography, meteorology, and health data were collected. The dependent variable was the average incidence rate of leprosy from 1991 to 1999. Simple and multiple linear regressions were performed to assess the relationship between the dependent and the independent variables. The average incidence rate for all the municipalities for the 1991-1999 period, varied from 0.06 to 14.68 per 10000 persons per year. The level of inequality (beta = 1.67, P = 0.011), the mean years of study among the population >or=25 years old (beta = 1.35, P < 0.001), the population growth from 1991 to 1996 (beta = 0.02, P = 0.007), the percentage of children 7-14 years old that did not go to the school (beta = 0.02, P = 0.028), and the presence of a railroad in the municipality (beta = 0.45, P = 0.038) were found to be predictors of the incidence rate of leprosy in Ceará. Our findings fit the assumption that, in Ceará, leprosy is associated with a high level of poverty and uncontrolled urbanization. We put forward the hypothesis that urbanization increases not only social inequality eventually leading to strong polarization, but also excludes people from social and material opportunities. Apparently, such deprivations render them susceptible for leprosy.

Physical distance, genetic relationship, age, and leprosy classification are independent risk factors for leprosy in contacts of patients with leprosy.

Linda Oskam,  David Pahan,  Jan Richardus … (2006)
Close contacts of patients with leprosy have a higher risk of developing leprosy. Several risk factors have been identified, including genetic relationship and physical distance. Their independent contributions to the risk of developing leprosy, however, have never been sufficiently quantified. Logistic-regression analysis was performed on intake data from a prospective cohort study of 1037 patients newly diagnosed as having leprosy and their 21,870 contacts. Higher age showed an increased risk, with a bimodal distribution. Contacts of patients with paucibacillary (PB) leprosy with 2-5 lesions (PB2-5) and those with multibacillary (MB) leprosy had a higher risk than did contacts of patients with single-lesion PB leprosy. The core household group had a higher risk than other contacts living under the same roof and next-door neighbors, who again had a higher risk than neighbors of neighbors. A close genetic relationship indicated an increased risk when blood-related children, parents, and siblings were pooled together. Age of the contact, the disease classification of the index patient, and physical and genetic distance were independently associated with the risk of a contact acquiring leprosy. Contact surveys in leprosy should be not only focused on household contacts but also extended to neighbors and consanguineous relatives, especially when the patient has PB2-5 or MB leprosy.

Publisher ID: 10-PONE-RA-19810R1
DOI: 10.1371/journal.pone.0014061
PMC ID: 2988824
PubMed ID: 21124916
Copyright statement: Fischer et al. This is an open-access article distributed under the terms of the Creative Commons Attribution License, which permits unrestricted use, distribution, and reproduction in any medium, provided the original author and source are credited.