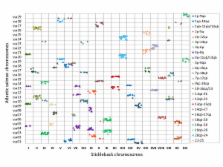 The Atlantic salmon genome is in the process of returning to a diploid state after undergoing a whole genome duplication (WGD) event between 25 and100 million years ago. Existing data on the proportion of paralogous sequence variants (PSVs), multisite variants (MSVs) and other types of complex sequence variation suggest that the rediplodization phase is far from over. The aims of this study were to construct a high density linkage map for Atlantic salmon, to characterize the extent of rediploidization and to improve our understanding of genetic differences between sexes in this species.

A linkage map for Atlantic salmon comprising 29 chromosomes and 5650 single nucleotide polymorphisms (SNPs) was constructed using genotyping data from 3297 fish belonging to 143 families. Of these, 2696 SNPs were generated from ESTs or other gene associated sequences. Homeologous chromosomal regions were identified through the mapping of duplicated SNPs and through the investigation of syntenic relationships between Atlantic salmon and the reference genome sequence of the threespine stickleback ( Gasterosteus aculeatus). The sex-specific linkage maps spanned a total of 2402.3 cM in females and 1746.2 cM in males, highlighting a difference in sex specific recombination rate (1.38:1) which is much lower than previously reported in Atlantic salmon. The sexes, however, displayed striking differences in the distribution of recombination sites within linkage groups, with males showing recombination strongly localized to telomeres.

The map presented here represents a valuable resource for addressing important questions of interest to evolution (the process of re-diploidization), aquaculture and salmonid life history biology and not least as a resource to aid the assembly of the forthcoming Atlantic salmon reference genome sequence.

Yesterday's polyploids and the mystery of diploidization.

Mary K Wolfe (2001)
Thirty years after Susumu Ohno proposed that vertebrate genomes are degenerate polyploids, the extent to which genome duplication contributed to the evolution of the vertebrate genome, if at all, is still uncertain. Sequence-level studies on model organisms whose genomes show clearer evidence of ancient polyploidy are invaluable because they indicate what the evolutionary products of genome duplication can look like. The greatest mystery is the molecular basis of diploidization, the evolutionary process by which a polyploid genome turns into a diploid one.

Direct evidence of a role for heterochromatin in meiotic chromosome segregation.

Abby F. Dernburg,  John W. Sedat,  R.Scott Hawley (1996)
We have investigated the mechanism that enables achiasmate chromosomes to segregate from each other at meiosis I in D. melanogaster oocytes. Using novel cytological methods, we asked whether nonexchange chromosomes are paired prior to disjunction. Our results show that the heterochromatin of homologous chromosomes remains associated throughout prophase until metaphase I regardless of whether they undergo exchange, suggesting that homologous recognition can lead to segregation even in the absence of chiasmata. However, partner chromosomes lacking homology do not pair prior to disjunction. Furthermore, euchromatic synapsis is not maintained throughout prophase. These observations provide a physical demonstration that homologous and heterologous achiasmate segregations occur by different mechanisms and establish a role for heterochromatin in maintaining the alignment of chromosomes during meiosis.

Sequencing the genome of the Atlantic salmon (Salmo salar)

William Davidson,  Ben F Koop,  Steven Jones … (2010)
The International Collaboration to Sequence the Atlantic Salmon Genome (ICSASG) will produce a genome sequence that identifies and physically maps all genes in the Atlantic salmon genome and acts as a reference sequence for other salmonids.