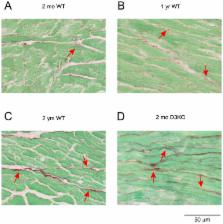 Blood pressure increases with age, and dysfunction of the dopamine D3 receptor has been implicated in the pathogenesis of hypertension. To evaluate the role of the D3 receptor in aging-related hypertension, we assessed cardiac structure and function in differently aged (2 mo, 1 yr, 2 yr) wild type (WT) and young (2 mo) D3 receptor knockout mice (D3KO). In WT, systolic and diastolic blood pressures and rate-pressure product (RPP) significantly increased with age, while heart rate significantly decreased. Blood pressure values, heart rate and RPP of young D3KO were significantly elevated over age-matched WT, but similar to those of the 2 yr old WT. Echocardiography revealed that the functional measurements of ejection fraction and fractional shortening decreased significantly with age in WT and that they were significantly smaller in D3KO compared to young WT. Despite this functional change however, cardiac morphology remained similar between the age-matched WT and D3KO. Additional morphometric analyses confirmed an aging-related increase in left ventricle (LV) and myocyte cross-sectional areas in WT, but found no difference between age-matched young WT and D3KO. In contrast, interstitial fibrosis, which increased with age in WT, was significantly elevated in the D3KO over age-matched WT, and similar to 2 yr old WT. Western analyses of myocardial homogenates revealed significantly increased levels of pro- and mature collagen type I in young D3KO. Column zymography revealed that activities of myocardial MMP-2 and MMP-9 increased with age in WTs, but in D3KO, only MMP-9 activity was significantly increased over age-matched WTs. Our data provide evidence that the dopamine D3 receptor has a critical role in the emergence of aging-related cardiac fibrosis, remodeling, and dysfunction.

Jerome Trzeciakowski,  Meredith E. Gansner,  E Elson … (2010)
Increased aortic stiffness, an important feature of many vascular diseases, eg, aging, hypertension, atherosclerosis, and aortic aneurysms, is assumed because of changes in extracellular matrix (ECM). We tested the hypothesis that the mechanisms also involve intrinsic stiffening of vascular smooth muscle cells (VSMCs). Stiffness was measured in vitro both by atomic force microscopy (AFM) and in a reconstituted tissue model, using VSMCs from aorta of young versus old male monkeys (Macaca fascicularis) (n=7/group), where aortic stiffness increases by 200% in vivo. The apparent elastic modulus was increased (P<0.05) in old (41.7+/-0.5 kPa) versus young (12.8+/-0.3 kPa) VSMCs but not after disassembly of the actin cytoskeleton with cytochalasin D. Stiffness of the VSMCs in the reconstituted tissue model was also higher (P<0.05) in old (23.3+/-3.0 kPa) than in young (13.7+/-2.4 kPa). These data support the novel concept, not appreciated previously, that increased vascular stiffness with aging is attributable not only to changes in ECM but also to intrinsic changes in VSMCs.

Shawn Hochman,  Stefan Clemens,  David B. Rye (2006)
Restless legs syndrome (RLS) involves abnormal limb sensations that diminish with motor activity, worsen at rest, have a circadian peak in expression in the evening and at night, and can severely disrupt sleep. Primary treatment is directed at CNS dopaminergic systems, particularly activation of D(2)-like (D(2), D(3), and D(4)) receptors. Although RLS affects 2% to 15% of the general population, the neural circuitry contributing to RLS remains speculative, and there is currently no accepted animal model to enable detailed mechanistic analyses. Traditional views suggest that RLS arises from supraspinal sources which favor facilitation of the flexor reflex and emergence of the RLS phenotype. The authors forward the hypothesis that RLS reflects a dysfunction of the little-studied dorsoposterior hypothalamic dopaminergic A11 cell group. They assert that, as the sole source of spinal dopamine, reduced drive in this system can lead to spinal network changes wholly consistent with RLS. The authors summarize their recent investigations on spinal cord dopamine dysfunction that rely on lesions centered on A11, and on studies in D(3) receptor knockout (D(3)KO) mice. Excessive locomotor behavior is evident in both sets of animals, and D(3)KO mice exhibit facilitation rather than the expected depression of spinal reflexes in the presence of dopamine as well as a reversal in their circadian expression of the rate-limiting enzyme for dopamine synthesis, tyrosine hydroxylase. Taken together, these findings are consistent with an involvement of spinal dopamine dysfunction in the etiology of RLS, and they argue that the D(3)KO mouse might serve as a relevant animal model to study the underlying mechanisms of RLS.

This project was supported in part by Start-up Awards of the Brody School of Medicine (SC, DAT) and by the National Institutes of Health National Heart, Lung, and Blood Institute award R01HL081720 (DAT). TLJ was funded in part by a Graduate School Scholarship of the Brody School of Medicine and the Department of Physiology. The funders had no role in study design, data collection and analysis, decision to publish, or preparation of the manuscript.