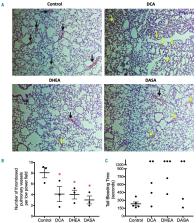 Platelets are critical to arterial thrombosis, which underlies myocardial infarction and stroke. Activated platelets, regardless of the nature of their stimulus, initiate energy-intensive processes that sustain thrombus, while adapting to potential adversities of hypoxia and nutrient deprivation within the densely packed thrombotic milieu. We report here that stimulated platelets switch their energy metabolism to aerobic glycolysis by modulating enzymes at key checkpoints in glucose metabolism. We found that aerobic glycolysis, in turn, accelerates flux through the pentose phosphate pathway and supports platelet activation. Hence, reversing metabolic adaptations of platelets could be an effective alternative to conventional anti-platelet approaches, which are crippled by remarkable redundancy in platelet agonists and ensuing signaling pathways. In support of this hypothesis, small-molecule modulators of pyruvate dehydrogenase, pyruvate kinase M2 and glucose-6-phosphate dehydrogenase, all of which impede aerobic glycolysis and/or the pentose phosphate pathway, restrained the agonist-induced platelet responses ex vivo. These drugs, which include the anti-neoplastic candidate, dichloroacetate, and the Food and Drug Administration-approved dehydroepiandrosterone, profoundly impaired thrombosis in mice, thereby exhibiting potential as anti-thrombotic agents.

On the origin of cancer cells.

Matt I Gross,  Susan D Demo,  Jennifer B. Dennison … (2014)
Glutamine serves as an important source of energy and building blocks for many tumor cells. The first step in glutamine utilization is its conversion to glutamate by the mitochondrial enzyme glutaminase. CB-839 is a potent, selective, and orally bioavailable inhibitor of both splice variants of glutaminase (KGA and GAC). CB-839 had antiproliferative activity in a triple-negative breast cancer (TNBC) cell line, HCC-1806, that was associated with a marked decrease in glutamine consumption, glutamate production, oxygen consumption, and the steady-state levels of glutathione and several tricarboxylic acid cycle intermediates. In contrast, no antiproliferative activity was observed in an estrogen receptor-positive cell line, T47D, and only modest effects on glutamine consumption and downstream metabolites were observed. Across a panel of breast cancer cell lines, GAC protein expression and glutaminase activity were elevated in the majority of TNBC cell lines relative to receptor positive cells. Furthermore, the TNBC subtype displayed the greatest sensitivity to CB-839 treatment and this sensitivity was correlated with (i) dependence on extracellular glutamine for growth, (ii) intracellular glutamate and glutamine levels, and (iii) GAC (but not KGA) expression, a potential biomarker for sensitivity. CB-839 displayed significant antitumor activity in two xenograft models: as a single agent in a patient-derived TNBC model and in a basal like HER2(+) cell line model, JIMT-1, both as a single agent and in combination with paclitaxel. Together, these data provide a strong rationale for the clinical investigation of CB-839 as a targeted therapeutic in patients with TNBC and other glutamine-dependent tumors.

Microparticles in hemostasis and thrombosis.

Nigel Mackman,  Elizabeth Owens (2011)
Blood contains microparticles (MPs) derived from a variety of cell types, including platelets, monocytes, and endothelial cells. In addition, tumors release MPs into the circulation. MPs are formed from membrane blebs that are released from the cell surface by proteolytic cleavage of the cytoskeleton. All MPs are procoagulant because they provide a membrane surface for the assembly of components of the coagulation protease cascade. Importantly, procoagulant activity is increased by the presence of anionic phospholipids, particularly phosphatidylserine (PS), and the procoagulant protein tissue factor (TF), which is the major cellular activator of the clotting cascade. High levels of platelet-derived PS(+) MPs are present in healthy individuals, whereas the number of TF(+), PS(+) MPs is undetectable or very low. However, levels of PS(+), TF(+) MPs are readily detected in a variety of diseases, and monocytes appear to be the primary cellular source. In cancer, PS(+), TF(+) MPs are derived from tumors and may serve as a useful biomarker to identify patients at risk for venous thrombosis. This review will summarize our current knowledge of the role of procoagulant MPs in hemostasis and thrombosis.

PPK and AT contributed equally to this work.

Material published in Haematologica is covered by copyright. All rights are reserved to the Ferrata Storti Foundation. Use of published material is allowed under the following terms and conditions:

https://creativecommons.org/licenses/by-nc/4.0/legalcode, sect. 3. Reproducing and sharing published material for commercial purposes is not allowed without permission in writing from the publisher.