A cross-sectional, population-based study measuring comorbidity among people living with HIV in Ontario 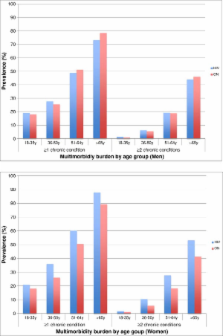 As people diagnosed with HIV and receiving combination antiretroviral therapy are now living longer, they are likely to acquire chronic conditions related to normal ageing and the effects of HIV and its treatment. Comordidities for people with HIV have not previously been described from a representative population perspective.

We used linked health administrative data from Ontario, Canada. We applied a validated algorithm to identify people with HIV among all residents aged 18 years or older between April 1, 1992 and March 31, 2009. We randomly selected 5 Ontario adults who were not identified with HIV for each person with HIV for comparison. Previously validated case definitions were used to identify persons with mental health disorders and any of the following physical chronic diseases: diabetes, congestive heart failure, acute myocardial infarction, stroke, hypertension, asthma, chronic obstructive lung disease, peripheral vascular disease and end-stage renal failure. We examined multimorbidity prevalence as the presence of at least two physical chronic conditions, or as combined physical-mental health multimorbidity. Direct age-sex standardized rates were calculated for both cohorts for comparison.

People living with HIV in Ontario, especially women, had higher prevalence of comorbidity and multimorbidity than the general population. Quantifying this morbidity at the population level can help inform healthcare delivery requirements for this complex population.

Chronic illness management: what is the role of primary care?.

Arlyss Rothman,  Edward H Wagner (2003)
An estimated 99 million Americans live with a chronic illness. Meeting the needs of this population is one of the major challenges facing the U.S. health care system today and in the future. Dozens of studies, surveys, and audits have revealed that sizable proportions of chronically ill patients have not received effective therapy and do not have optimal disease control. The consistent findings of generally substandard care for many chronic conditions have spurred proposals that care be shifted to specialists or disease management programs. Published evidence to date does not indicate any clear superiority of these alternatives to primary care. The defining features of primary care (that is, continuity, coordination, and comprehensiveness) are well suited to care of chronic illness. A rapidly growing body of health services research points to the design of the care system, not the specialty of the physician, as the primary determinant of chronic care quality. The future of primary care in the United States may depend on its ability to successfully redesign care systems that can meet the needs of a growing population of chronically ill patients.

Accuracy of administrative databases in identifying patients with hypertension

Karen Tu,  Norman RC Campbell,  Zhong-Liang Chen … (2007)
Background Traditionally, the determination of the occurrence of hypertension in patients has relied on costly and time-consuming survey methods that do not allow patients to be followed over time. Objectives To determine the accuracy of using administrative claims data to identify rates of hypertension in a large population living in a single-payer health care system. Methods Various definitions for hypertension using administrative claims databases were compared with 2 other reference standards: (1) data obtained from a random sample of primary care physician offices throughout the province, and (2) self-reported survey data from a national census. Results A case-definition algorithm employing 2 outpatient physician billing claims for hypertension over a 3-year period had a sensitivity of 73% (95% confidence interval [CI] 69%–77%), a specificity of 95% (CI 93%–96%), a positive predictive value of 87% (CI 84%–90%), and a negative predictive value of 88% (CI 86%–90%) for detecting hypertensive adults compared with physician-assigned diagnoses. Compared with self-reported survey data, the algorithm had a sensitivity of 64% (CI 63%–66%), a specificity of 94%(CI 93%–94%), a positive predictive value of 77% (76%–78%), and negative predictive value of 89% (CI 88%–89%). When this algorithm was applied to the entire province of Ontario, the age- and sex-standardized prevalence of hypertension in adults older than 35 years increased from 20% in 1994 to 29% in 2002. Conclusions It is possible to use administrative data to accurately identify from a population sample those patients who have been diagnosed with hypertension. Given that administrative data are already routinely collected, their use is likely to be substantially less expensive compared with serial cross-sectional or cohort studies for surveillance of hypertension occurrence and outcomes over time in a large population.

Multimorbidity: redesigning health care for people who use it.