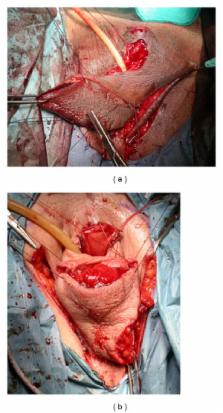 Neovaginal prolapse is a rare and distressing complication after male-to-female sexual reassignment surgery. We retrospectively analysed the prevalence of partial and total neo-vaginal prolapses after sexual reassignment surgery in our institute. During the years, two different techniques have been adopted with the aim of fixing the neovaginal cylinder. In the first, two absorbable sutures are placed at the top of the penoscrotal cylinder and fixed to the Denonvilliers fascia. In the second, two additional sutures are added from the posterior/midpoint of the flap to the prerectal fascia. We enrolled 282 consecutive transsexual patients. 65 (23.04%) out of the 282 were treated with the first technique and the following 217 (76.96%) with the last technique. In the first technique, 1 case (1.53%) of total prolapse and 7 cases (10.76%) of partial prolapse were observed, while in the other 217 patients treated with the second technique only 9 cases of partial prolapse were observed (4.14%) and no cases of total prolapse. All prolapses occurred within 6 months from the procedure. In our experience, the use of 4 stitches and a more proximal positioning of the sutures to fix the penoscrotal apex with the Denonvilliers fascia guarantees a lower risk of prolapse.

Vaginal versus abdominal reconstructive surgery for the treatment of pelvic support defects: a prospective randomized study with long-term outcome evaluation.

J.Thomas Benson,  Vincent Lucente,  Elizabeth McClellan (1996)
Our purpose was to determine whether a vaginal or abdominal approach is more effective in correcting uterovaginal prolapse. Eighty-eight women with cervical prolapse to or beyond the hymen or with vaginal vault inversion > 50% of its length and anterior vaginal wall descent to or beyond the hymen were randomized to a vaginal versus abdominal surgical approach. Forty-eight women underwent a vaginal approach with bilateral sacrospinous vault suspension and paravaginal repair, and 40 women underwent an abdominal approach with colposacral suspension and paravaginal repair. Ancillary procedures were performed as indicated. Detailed pelvic examination was performed postoperatively by the nonsurgeon coauthor yearly up to 5 years. The women were examined while standing during maximum strain. Surgery was classified as optimally effective if the woman remained asymptomatic, the vaginal apex was supported above the levator plate, and no protrusion of any vaginal tissue beyond the hymen occurred. Surgical effectiveness was considered unsatisfactory if the woman was symptomatic, the apex descended > 50% of its length, or the vaginal wall protruded beyond the hymen. Eighty women (vaginal 42, abdominal 38) were available for evaluation at 1 to 5.5 years (mean 2.5 years). The groups were similar in age, weight, parity, and estrogen status, and 56% had undergone prior pelvic surgery. There was no significant difference between the groups in morbidity, complications, hemoglobin change, dyspareunia, pain, or hospital stay. The vaginal group had longer catheter use, more urinary tract infections, more incontinence, decreased operative time, and lower hospital charge. Surgical effectiveness was optimal in 29% of the vaginal group and 58% of the abdominal group and was unsatisfactory leading to reoperation in 33% of the vaginal group and 16% of the abdominal group. The reoperations included procedures for recurrent incontinence in 12% of the vaginal and 2% of the abdominal groups. The relative risk of optimal effectiveness by the abdominal route is 2.03 (95% confidence interval 1.22 to 9.83), and the relative risk of unsatisfactory outcome using the vaginal route is 2.11 (95% confidence interval 0.90 to 4.94). Reconstructive pelvic surgery for correction of significant pelvic support defects was more effective with an abdominal approach.

Benny Feiner,  Kaven Baessler,  Molly Maher … (2011)
A previous version of the Cochrane review for prolapse surgery in 2008 provided two conclusions: abdominal sacrocolpopexy had lower recurrent vault prolapse rates than sacrospinous colpopexy but this was balanced against a longer time to return to activities of daily life. An additional continence procedure at the time of prolapse surgery might be beneficial in reducing post-operative stress urinary incontinence; however, this was weighed against potential adverse effects. The aim of this review is to provide an updated summary version of the current Cochrane review on the surgical management of pelvic organ prolapse. We searched the Cochrane Incontinence Group Specialised Register and reference lists of randomised or quasi-randomised controlled trials on surgery for pelvic organ prolapse. Trials were assessed independently by two reviewers. We identified 40 trials including 18 new and three updates. There were no additional studies on surgery for posterior prolapse. Native tissue anterior repair was associated with more anterior compartment failures than polypropylene mesh repair as an overlay (RR 2.14, 95% CI 1.23-3.74) or armed transobturator mesh (RR 3.55, 95% CI 2.29-5.51). There were no differences in subjective outcomes, quality of life data, de novo dyspareunia, stress urinary incontinence, reoperation rates for prolapse or incontinence, although some of these data were limited. Mesh erosions were reported in 10% (30/293). Including new studies on the impact of continence surgery at the time of prolapse surgery, meta-analysis revealed that concurrent continence surgery did not significantly reduce the rate of post-operative stress urinary incontinence (RR 1.39, 95% CI 0.53-3.70; random-effects model). The inclusion of new randomised controlled trials showed that the use of mesh at the time of anterior vaginal wall repair reduced the risk of recurrent anterior vaginal wall prolapse on examination. However, this was not translated into improved functional or quality of life outcomes. The value of a continence procedure in addition to a prolapse operation in women who are continent pre-operatively remains uncertain. Adequately powered randomised controlled trials are needed and should particularly include women's perceptions of prolapse symptoms and functional outcome.