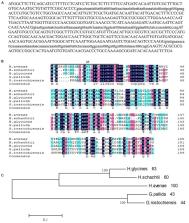 Plant parasitic nematodes secrete effectors into host plant tissues to facilitate parasitism. In this study, we identified a G16B09-like effector protein family from the transcriptome of Heterodera avenae, and then verified that most of the members could suppress programmed cell death triggered by BAX in Nicotiana benthamiana. Ha18764, the most homologous to G16B09, was further characterized for its function. Our experimental evidence suggested that Ha18764 was specifically expressed in the dorsal gland and was dramatically upregulated in the J4 stage of nematode development. A Magnaporthe oryzae secretion system in barley showed that the signal peptide of Ha18764 had secretion activity to deliver mCherry into plant cells. Arabidopsis thaliana overexpressing Ha18764 or Hs18764 was more susceptible to Heterodera schachtii. In contrast, BSMV-based host-induced gene silencing (HIGS) targeting Ha18764 attenuated H. avenae parasitism and its reproduction in wheat plants. Transient expression of Ha18764 suppressed PsojNIP, Avr3a/R3a, RBP-1/Gpa2, and MAPK kinases (MKK1 and NPK1 Nt)-related cell death in Nicotiana benthamiana. Co-expression assays indicated that Ha18764 also suppressed cell death triggered by four H. avenae putative cell-death-inducing effectors. Moreover, Ha18764 was also shown strong PTI suppression such as reducing the expression of plant defense-related genes, the burst of reactive oxygen species, and the deposition of cell wall callose. Together, our results indicate that Ha18764 promotes parasitism, probably by suppressing plant PTI and ETI signaling in the parasitic stages of H. avenae.

Aleš Svatoš,  Jan Doubský,  Bernd Schneider … (2009)
Selection pressure exerted by insects and microorganisms shapes the diversity of plant secondary metabolites. We identified a metabolic pathway for glucosinolates, known insect deterrents, that differs from the pathway activated by chewing insects. This pathway is active in living plant cells, may contribute to glucosinolate turnover, and has been recruited for broad-spectrum antifungal defense responses. The Arabidopsis CYP81F2 gene encodes a P450 monooxygenase that is essential for the pathogen-induced accumulation of 4-methoxyindol-3-ylmethylglucosinolate, which in turn is activated by the atypical PEN2 myrosinase (a type of beta-thioglucoside glucohydrolase) for antifungal defense. We propose that reiterated enzymatic cycles, controlling the generation of toxic molecules and their detoxification, enable the recruitment of glucosinolates in defense responses.

Patrick Schweizer,  Daniela Nowara,  C Lacomme … (2010)
Powdery mildew fungi are obligate biotrophic pathogens that only grow on living hosts and cause damage in thousands of plant species. Despite their agronomical importance, little direct functional evidence for genes of pathogenicity and virulence is currently available because mutagenesis and transformation protocols are lacking. Here, we show that the accumulation in barley (Hordeum vulgare) and wheat (Triticum aestivum) of double-stranded or antisense RNA targeting fungal transcripts affects the development of the powdery mildew fungus Blumeria graminis. Proof of concept for host-induced gene silencing was obtained by silencing the effector gene Avra10, which resulted in reduced fungal development in the absence, but not in the presence, of the matching resistance gene Mla10. The fungus could be rescued from the silencing of Avra10 by the transient expression of a synthetic gene that was resistant to RNA interference (RNAi) due to silent point mutations. The results suggest traffic of RNA molecules from host plants into B. graminis and may lead to an RNAi-based crop protection strategy against fungal pathogens.

Wenwu Ye,  Xiaoli Yu,  Alexander Sheng … (2011)
The genome of the soybean pathogen Phytophthora sojae contains nearly 400 genes encoding candidate effector proteins carrying the host cell entry motif RXLR-dEER. Here, we report a broad survey of the transcription, variation, and functions of a large sample of the P. sojae candidate effectors. Forty-five (12%) effector genes showed high levels of polymorphism among P. sojae isolates and significant evidence for positive selection. Of 169 effectors tested, most could suppress programmed cell death triggered by BAX, effectors, and/or the PAMP INF1, while several triggered cell death themselves. Among the most strongly expressed effectors, one immediate-early class was highly expressed even prior to infection and was further induced 2- to 10-fold following infection. A second early class, including several that triggered cell death, was weakly expressed prior to infection but induced 20- to 120-fold during the first 12 h of infection. The most strongly expressed immediate-early effectors could suppress the cell death triggered by several early effectors, and most early effectors could suppress INF1-triggered cell death, suggesting the two classes of effectors may target different functional branches of the defense response. In support of this hypothesis, misexpression of key immediate-early and early effectors severely reduced the virulence of P. sojae transformants.

This article was submitted to Plant Microbe Interactions, a section of the journal Frontiers in Plant Science