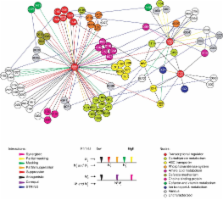 Biological pathways are structured in complex networks of interacting genes. Solving the architecture of such networks may provide valuable information, such as how microorganisms cause disease. Here we present a method (Tn-seq) for accurately determining quantitative genetic interactions on a genome-wide scale in microorganisms. Tn-seq is based on the assembly of a saturated Mariner transposon insertion library. After library selection, changes in frequency of each insertion mutant are determined by sequencing of the flanking regions en masse. These changes are used to calculate each mutant’s fitness. Fitness was determined for each gene of the gram-positive bacterium Streptococcus pneumoniae, a causative agent of pneumonia and meningitis. A genome-wide screen for genetic interactions identified both alleviating and aggravating interactions that could be further divided into seven distinct categories. Due to the wide activity of the Mariner transposon, Tn-seq has the potential to contribute to the exploration of complex pathways across many different species.

John Boyd,  Christopher Sassetti,  Avia E. Rubin (2003)
Despite over a century of research, tuberculosis remains a leading cause of infectious death worldwide. Faced with increasing rates of drug resistance, the identification of genes that are required for the growth of this organism should provide new targets for the design of antimycobacterial agents. Here, we describe the use of transposon site hybridization (TraSH) to comprehensively identify the genes required by the causative agent, Mycobacterium tuberculosis, for optimal growth. These genes include those that can be assigned to essential pathways as well as many of unknown function. The genes important for the growth of M. tuberculosis are largely conserved in the degenerate genome of the leprosy bacillus, Mycobacterium leprae, indicating that non-essential functions have been selectively lost since this bacterium diverged from other mycobacteria. In contrast, a surprisingly high proportion of these genes lack identifiable orthologues in other bacteria, suggesting that the minimal gene set required for survival varies greatly between organisms with different evolutionary histories.

Christian von Mering,  Lars J. Jensen,  Michael Kuhn … (2006)
Information on protein–protein interactions is still mostly limited to a small number of model organisms, and originates from a wide variety of experimental and computational techniques. The database and online resource STRING generalizes access to protein interaction data, by integrating known and predicted interactions from a variety of sources. The underlying infrastructure includes a consistent body of completely sequenced genomes and exhaustive orthology classifications, based on which interaction evidence is transferred between organisms. Although primarily developed for protein interaction analysis, the resource has also been successfully applied to comparative genomics, phylogenetics and network studies, which are all facilitated by programmatic access to the database backend and the availability of compact download files. As of release 7, STRING has almost doubled to 373 distinct organisms, and contains more than 1.5 million proteins for which associations have been pre-computed. Novel features include AJAX-based web-navigation, inclusion of additional resources such as BioGRID, and detailed protein domain annotation. STRING is available at

A DNA integrity network in the yeast Saccharomyces cerevisiae.