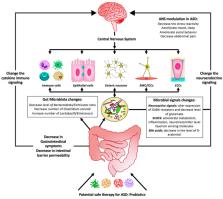 Gastrointestinal symptoms (GIS) have been reported repeatedly in people with autism spectrum disorder (ASD) and studies have reported interesting correlations between severity of behavioral and gastrointestinal symptoms. Growing evidence indicates that the gut microbiota in ASD is altered with various shifts described at different taxonomic levels, pointing to the importance of considering the gut–brain axis in treatment of these disorders. Probiotics are live beneficial bacteria that are ingested as food or customized pills. These beneficial bacteria, when added in sufficient amounts, can correct the dysbiosis. Because probiotics have shown success in treating irritable bowel syndrome (IBS), it is plausible to investigate whether they can induce alleviation of behavioral symptoms as well. Probiotics show, in some clinical studies, their potential benefits (1) in improving gastrointestinal dysfunction, (2) in correcting dysbiosis, (3) in consequently reducing the severity of ASD symptoms. This review compiles data from selected studies that investigate these benefits and the mechanisms that mediate these effects, which include the production of metabolites, hormones, and neurotransmitters and the regulation of pro-inflammatory and regulatory cytokines. Future research based on more randomized, controlled studies with a larger population size and standardized use of strains, concentration of probiotics, duration of treatments, and methods of DNA extraction is still needed in this area, which may lead to more robust results.

The gut microbiome in health and in disease

Andrew Shreiner,  John Kao,  Vincent B. Young (2015)
Recent technological advancements and expanded efforts have led to a tremendous growth in the collective knowledge of the human microbiome. This review will highlight some of the important recent findings in this area of research.

Pyrosequencing study of fecal microflora of autistic and control children.

Sydney M. Finegold,  Scot Dowd,  Viktoria Gontcharova … (2010)
There is evidence of genetic predisposition to autism, but the percent of autistic subjects with this background is unknown. It is clear that other factors, such as environmental influences, may play a role in this disease. In the present study, we have examined the fecal microbial flora of 33 subjects with various severities of autism with gastrointestinal symptoms, 7 siblings not showing autistic symptoms (sibling controls) and eight non-sibling control subjects, using the bacterial tag encoded FLX amplicon pyrosequencing (bTEFAP) procedure. The results provide us with information on the microflora of stools of young children and a compelling picture of unique fecal microflora of children with autism with gastrointestinal symptomatology. Differences based upon maximum observed and maximum predicted operational taxonomic units were statistically significant when comparing autistic and control subjects with p-values ranging from <0.001 to 0.009 using both parametric and non-parametric estimators. At the phylum level, Bacteroidetes and Firmicutes showed the most difference between groups of varying severities of autism. Bacteroidetes was found at high levels in the severely autistic group, while Firmicutes were more predominant in the control group. Smaller, but significant, differences also occurred in the Actinobacterium and Proteobacterium phyla. Desulfovibrio species and Bacteroides vulgatus are present in significantly higher numbers in stools of severely autistic children than in controls. If the unique microbial flora is found to be a causative or consequent factor in this type of autism, it may have implications with regard to a specific diagnostic test, its epidemiology, and for treatment and prevention. Copyright (c) 2010 Elsevier Ltd. All rights reserved.

James Adams,  Leah Johansen,  Linda D Powell … (2011)
Background Children with autism have often been reported to have gastrointestinal problems that are more frequent and more severe than in children from the general population. Methods Gastrointestinal flora and gastrointestinal status were assessed from stool samples of 58 children with Autism Spectrum Disorders (ASD) and 39 healthy typical children of similar ages. Stool testing included bacterial and yeast culture tests, lysozyme, lactoferrin, secretory IgA, elastase, digestion markers, short chain fatty acids (SCFA's), pH, and blood presence. Gastrointestinal symptoms were assessed with a modified six-item GI Severity Index (6-GSI) questionnaire, and autistic symptoms were assessed with the Autism Treatment Evaluation Checklist (ATEC). Results Gastrointestinal symptoms (assessed by the 6-GSI) were strongly correlated with the severity of autism (assessed by the ATEC), (r = 0.59, p < 0.001). Children with 6-GSI scores above 3 had much higher ATEC Total scores than those with 6-GSI-scores of 3 or lower (81.5 +/- 28 vs. 49.0 +/- 21, p = 0.00002). Children with autism had much lower levels of total short chain fatty acids (-27%, p = 0.00002), including lower levels of acetate, proprionate, and valerate; this difference was greater in the children with autism taking probiotics, but also significant in those not taking probiotics. Children with autism had lower levels of species of Bifidobacter (-43%, p = 0.002) and higher levels of species of Lactobacillus (+100%, p = 0.00002), but similar levels of other bacteria and yeast using standard culture growth-based techniques. Lysozyme was somewhat lower in children with autism (-27%, p = 0.04), possibly associated with probiotic usage. Other markers of digestive function were similar in both groups. Conclusions The strong correlation of gastrointestinal symptoms with autism severity indicates that children with more severe autism are likely to have more severe gastrointestinal symptoms and vice versa. It is possible that autism symptoms are exacerbated or even partially due to the underlying gastrointestinal problems. The low level of SCFA's was partly associated with increased probiotic use, and probably partly due to either lower production (less sacchrolytic fermentation by beneficial bacteria and/or lower intake of soluble fiber) and/or greater absorption into the body (due to longer transit time and/or increased gut permeability).