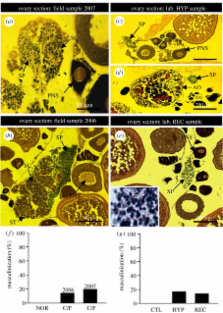 Journal: Proceedings of the Royal Society B: Biological Sciences

The long-term impacts on marine ecosystems of the recent dramatic worldwide increase in the incidence of coastal hypoxia are unknown. Here, we show widespread reproductive disruption in Atlantic croakers collected from hypoxic sites approximately 120 km apart in the extensive northern Gulf of Mexico continental shelf hypoxic zone. Gonadal growth and gamete production were impaired in croakers from hypoxic sites compared with fish from reference normoxic sites east of the Mississippi River Delta. Male germ cells were detected in approximately 19 per cent of croaker ovaries collected in the hypoxic region, but were absent in ovaries from normoxic sites. In addition, the sex ratio was skewed towards males at the hypoxic sites. The masculinization and other reproductive disruptions were associated with declines in neuroendocrine function, as well as ovarian and brain expression of aromatase (the enzyme that converts androgens to oestrogens). A similar incidence of ovarian masculinization and decline in ovarian aromatase expression were observed in croaker after chronic laboratory hypoxia exposure, indicating that ovarian masculinization is a specific hypoxia response and is due to decreased aromatase activity. The results suggest severe reproductive impairment can occur over large coastal regions in marine fish populations exposed to seasonal hypoxia, with potential long-term impacts on population abundance.

Beyond Science into Policy: Gulf of Mexico Hypoxia and the Mississippi River

Ovarian aromatase and estrogens: a pivotal role for gonadal sex differentiation and sex change in fish.

Yann Guiguen,  Alexis Fostier,  Francesc Piferrer … (2010)
The present review focuses on the roles of estrogens and aromatase (Cyp19a1a), the enzyme needed for their synthesis, in fish gonadal sex differentiation. Based on the recent literature, we extend the already well accepted hypothesis of an implication of estrogens and Cyp19a1a in ovarian differentiation to a broader hypothesis that would place estrogens and Cyp19a1a in a pivotal position to control not only ovarian, but also testicular differentiation, in both gonochoristic and hermaphrodite fish species. This working hypothesis states that cyp19a1a up-regulation is needed not only for triggering but also for maintaining ovarian differentiation and that cyp19a1a down-regulation is the only necessary step for inducing a testicular differentiation pathway. When considering arguments for and against, most of the information available for fish supports this hypothesis since either suppression of cyp19a1a gene expression, inhibition of Cyp19a1a enzymatic activity, or blockage of estrogen receptivity are invariably associated with masculinization. This is also consistent with reports on normal gonadal differentiation, and steroid-modulated masculinization with either androgens, aromatase inhibitors or estrogen receptor antagonists, temperature-induced masculinization and protogynous sex change in hermaphrodite species. Concerning the regulation of fish cyp19a1a during gonadal differentiation, the transcription factor foxl2 has been characterized as an ovarian specific upstream regulator of a cyp19a1a promoter that would co-activate cyp19a1a expression, along with some additional partners such as nr5a1 (sf1) or cAMP. In contrast, upstream factors potentially down-regulating cyp19a1a during testicular differentiation are still hypothetical, such as the dmrt1 gene, but their definitive characterization as testicular repressors of cyp19a1a would strongly strengthen the hypothesis that early testicular differentiation would need active repression of cyp19a1a expression. Copyright 2009 Elsevier Inc. All rights reserved.

Hypoxia in the northern Gulf of Mexico: Does the science support the Plan to Reduce, Mitigate, and Control Hypoxia?