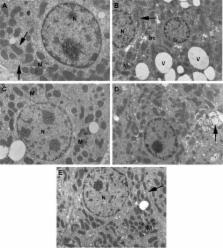 Environmental exposure to arsenic represents a serious challenge to humans and other animals. The aim of the present study was to test the protective effect of antioxidant N-acetylcysteine (NAC) either individually or in combination with a chelating agent, meso-2,3-dimercaptosuccinic acid (DMSA), against sodium arsenite oral toxicity in male rats. Five groups were used: control; arsenic group (orally administrated in a concentration of 2 mg/kg body weight [b.w.]); the other three groups were orally administrated sodium arsenite in a concentration of 2 mg/kg b.w. followed by either NAC (10 mg/kg b.w., intraperitoneally [i.p.]), DMSA (50 mg/kg b.w., i.p.) or NAC plus DMSA. Arsenic toxicity caused significant rise in serum aspartate aminotransferase, alanine aminotransferase and total bilirubin, and a significant decrease in total protein (TP) and albumin levels after 3 weeks of experimental period. In addition, arsenic-treated rats showed significantly higher arsenic content in liver and significant rise in hepatic malondialdehyde level. By contrast, sharp decreases in glutathione content and catalase and glutathione reductase activities were discernible. NAC and/or DMSA counteracted most of these physiologic and biochemical defects. NAC monotherapy was more effective than DMSA in increasing TP, while DMSA was more effective in decreasing alanine aminotransferase. The combined treatment was superior over monotherapies in recovery of TP and glutathione. Biochemical data were well supported by histopathological and ultrastructural findings. In conclusion, the combination therapy of NAC and DMSA may be an ideal choice against oxidative insult induced by arsenic poisoning.

Arsenic-induced oxidative stress and its reversibility.

M S Flora (2011)
This review summarizes the literature describing the molecular mechanisms of arsenic-induced oxidative stress, its relevant biomarkers, and its relation to various diseases, including preventive and therapeutic strategies. Arsenic alters multiple cellular pathways including expression of growth factors, suppression of cell cycle checkpoint proteins, promotion of and resistance to apoptosis, inhibition of DNA repair, alterations in DNA methylation, decreased immunosurveillance, and increased oxidative stress, by disturbing the pro/antioxidant balance. These alterations play prominent roles in disease manifestation, such as carcinogenicity, genotoxicity, diabetes, cardiovascular and nervous systems disorders. The exact molecular and cellular mechanisms involved in arsenic toxicity are rather unrevealed. Arsenic alters cellular glutathione levels either by utilizing this electron donor for the conversion of pentavalent to trivalent arsenicals or directly binding with it or by oxidizing glutathione via arsenic-induced free radical generation. Arsenic forms oxygen-based radicals (OH(•), O(2)(•-)) under physiological conditions by directly binding with critical thiols. As a carcinogen, it acts through epigenetic mechanisms rather than as a classical mutagen. The carcinogenic potential of arsenic may be attributed to activation of redox-sensitive transcription factors and other signaling pathways involving nuclear factor κB, activator protein-1, and p53. Modulation of cellular thiols for protection against reactive oxygen species has been used as a therapeutic strategy against arsenic. N-acetylcysteine, α-lipoic acid, vitamin E, quercetin, and a few herbal extracts show prophylactic activity against the majority of arsenic-mediated injuries in both in vitro and in vivo models. This review also updates the reader on recent advances in chelation therapy and newer therapeutic strategies suggested to treat arsenic-induced oxidative damage. Copyright © 2011 Elsevier Inc. All rights reserved.

I Fridovich,  Y Kono (1982)
Catalase was inhibited by a flux of O2- generated in situ by the aerobic xanthine oxidase reaction. Two distinct types of inhibition could be distinguished. One of these was rapidly established and could be as rapidly reversed by the addition of superoxide dismutase. The second developed slowly and was reversed by ethanol, but not by superoxide dismutase. The rapid inhibition was probably due to conversion of catalase to the ferrooxy state (compound III), while the slow inhibition was due to conversion to the ferryl state (compound II). Since neither compound III nor compound II occurs in the catalatic reaction pathway, they are inactive. This inhibition of catalase by O2- provides the basis for a synergism between superoxide dismutase and catalase. Such synergisms have been observed in vitro and may be significant in vivo.

M S Flora (1999)
1. The present study examined whether arsenic induces oxidative stress in liver, brain and erythrocytes (RBC) based on the investigation of certain selected parameters. It also explored the possibility that combined administration of N-acetylcysteine (NAC) and meso 2,3-dimercaptosuccinic acid (DMSA) was capable of achieving better reversibility in the parameters indicative of arsenic-induced oxidative stress than individual treatment with either of these drugs. 2. Male rats were exposed to 100 p.p.m. sodium arsenite in their drinking water for 12 weeks (equivalent to 12 mg/kg As). The arsenic was then removed and rats were given NAC (1 mmol/kg per day), DMSA (1 mmol/kg per day) or a combination of the two, orally, once daily for 5 days. Animals not given arsenic and those given arsenic but not NAC or DMSA served as negative and positive controls, respectively. 3. Twelve weeks of arsenic exposure was found to deplete glutathione (GSH) levels, increase oxidized glutathione (GSSG) and promote malondialdehyde (MDA) production in both liver and brain samples. In addition to a significant reduction in RBC delta-aminolevulinic acid dehydratase (ALAD) activity and GSH levels, a marked elevation in MDA production may also contribute to arsenic-induced oxidative stress. 4. Treatment with either NAC or DMSA alone partially reversed arsenic-induced alterations in hepatic GSH and MDA, while only brain MDA levels responded favourably to these drugs. Only DMSA appeared to restore blood ALAD, while RBC MDA levels responded favourably to both drugs. Treatment with DMSA also produced an effective depletion of blood and hepatic arsenic concentrations. In the liver, most of these parameters were more effectively reversed by combined treatment with NAC and DMSA compared with the effects of either drug alone. 5. These results provide in vivo evidence of arsenic-induced oxidative stress in liver, brain and RBC and indicate that these effects can be mitigated by pharmacological intervention that encompasses combined treatment with NAC and DMSA.