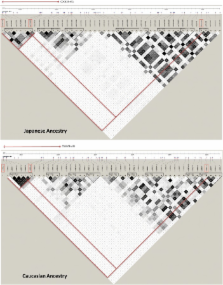 Endometriosis is a heritable common gynaecological condition influenced by multiple genetic and environmental factors. Genome-wide association studies (GWASs) have proved successful in identifying common genetic variants of moderate effects for various complex diseases. To date, eight GWAS and replication studies from multiple populations have been published on endometriosis. In this review, we investigate the consistency and heterogeneity of the results across all the studies and their implications for an improved understanding of the aetiology of the condition.

Meta-analyses were conducted on four GWASs and four replication studies including a total of 11 506 cases and 32 678 controls, and on the subset of studies that investigated associations for revised American Fertility Society (rAFS) Stage III/IV including 2859 cases. The datasets included 9039 cases and 27 343 controls of European (Australia, Belgium, Italy, UK, USA) and 2467 cases and 5335 controls of Japanese ancestry. Fixed and Han and Elkin random-effects models, and heterogeneity statistics (Cochran's Q test), were used to investigate the evidence of the nine reported genome-wide significant loci across datasets and populations.

Our meta-analysis shows remarkable consistency in endometriosis GWAS results across studies, with little evidence of population-based heterogeneity. They also show that the phenotypic classifications used in GWAS to date have been limited. Stronger associations with Stage III/IV disease observed for most loci emphasize the importance for future studies to include detailed sub-phenotype information. Functional studies in relevant tissues are needed to understand the effect of the variants on downstream biological pathways.

Wnt signalling and its impact on development and cancer.

Judith Klaus,  Walter Birchmeier (2008)
The Wnt signalling pathway is an ancient system that has been highly conserved during evolution. It has a crucial role in the embryonic development of all animal species, in the regeneration of tissues in adult organisms and in many other processes. Mutations or deregulated expression of components of the Wnt pathway can induce disease, most importantly cancer. The first gene to be identified that encodes a Wnt signalling component, Int1 (integration 1), was molecularly characterized from mouse tumour cells 25 years ago. In parallel, the homologous gene Wingless in Drosophila melanogaster, which produces developmental defects in embryos, was characterized. Since then, further components of the Wnt pathway have been identified and their epistatic relationships have been defined. This article is a Timeline of crucial discoveries about the components and functions of this essential pathway.

Characterization of a germ-line deletion, including the entire INK4/ARF locus, in a melanoma-neural system tumor family: identification of ANRIL, an antisense noncoding RNA whose expression coclusters with ARF.

Michel Vidaud,  Ingrid Laurendeau,  Dominique Vidaud … (2007)
We have previously detected a large germ-line deletion, which included the entire p15/CDKN2B-p16/CDKN2A-p14/ARF gene cluster, in the largest melanoma-neural system tumor (NST) syndrome family known to date by means of heterozygosity mapping based on microsatellite markers. Here, we used gene dose mapping with sequence-tagged site real-time PCR to locate the deletion end points, which were then precisely characterized by means of long-range PCR and nucleotide sequencing. The deletion was exactly 403,231 bp long and included the entire p15/CDKN2B, p16/CDKN2A, and p14/ARF genes. We then developed a simple and rapid assay to detect the junction fragment and to serve as a direct predictive DNA test for this large French family. We identified a new large antisense noncoding RNA (named ANRIL) within the 403-kb germ-line deletion, with a first exon located in the promoter of the p14/ARF gene and overlapping the two exons of p15/CDKN2B. Expression of ANRIL mainly coclustered with p14/ARF both in physiologic (various normal human tissues) and in pathologic conditions (human breast tumors). This study points to the existence of a new gene within the p15/CDKN2B-p16/CDKN2A-p14/ARF locus putatively involved in melanoma-NST syndrome families and in melanoma-prone families with no identified p16/CDKN2A mutations as well as in somatic tumors.

Female development in mammals is regulated by Wnt-4 signalling.

Sheray Chin,  Shannon McMahon,  A Kispert … (1999)
In the mammalian embryo, both sexes are initially morphologically indistinguishable: specific hormones are required for sex-specific development. Mullerian inhibiting substance and testosterone secreted by the differentiating embryonic testes result in the loss of female (Mullerian) or promotion of male (Wolffian) reproductive duct development, respectively. The signalling molecule Wnt-4 is crucial for female sexual development. At birth, sexual development in males with a mutation in Wnt-4 appears to be normal; however, Wnt-4-mutant females are masculinized-the Mullerian duct is absent while the Wolffian duct continues to develop. Wnt-4 is initially required in both sexes for formation of the Mullerian duct, then Wnt-4 in the developing ovary appears to suppress the development of Leydig cells; consequently, Wnt-4-mutant females ectopically activate testosterone biosynthesis. Wnt-4 may also be required for maintenance of the female germ line. Thus, the establishment of sexual dimorphism is under the control of both local and systemic signals.