Scaling up HIV self-testing in sub-Saharan Africa: a review of technology, policy and evidence 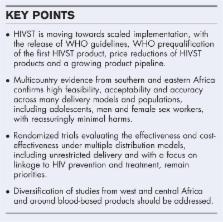 HIV self-testing (HIVST) can provide complementary coverage to existing HIV testing services and improve knowledge of status among HIV-infected individuals. This review summarizes the current technology, policy and evidence landscape in sub-Saharan Africa and priorities within a rapidly evolving field.

HIVST is moving towards scaled implementation, with the release of WHO guidelines, WHO prequalification of the first HIVST product, price reductions of HIVST products and a growing product pipeline. Multicountry evidence from southern and eastern Africa confirms high feasibility, acceptability and accuracy across many delivery models and populations, with minimal harms. Evidence on the effectiveness of HIVST on increased testing coverage is strong, while evidence on demand generation for follow-on HIV prevention and treatment services and cost-effective delivery is emerging. Despite these developments, HIVST delivery remains limited outside of pilot implementation.

Important technology gaps include increasing availability of more sensitive HIVST products in low and middle-income countries. Regulatory and postmarket surveillance systems for HIVST also require further development. Randomized trials evaluating the effectiveness and cost-effectiveness under multiple distribution models, including unrestricted delivery and with a focus on linkage to HIV prevention and treatment, remain priorities. Diversification of studies from west and central Africa and around blood-based products should be addressed.

‘I will choose when to test, where I want to test’: investigating young people's preferences for HIV self-testing in Malawi and Zimbabwe

HIV Self-Testing Could “Revolutionize Testing in South Africa, but It Has Got to Be Done Properly”: Perceptions of Key Stakeholders

Tawanda Makusha,  Lucia Knight,  Miriam Taegtmeyer … (2015)
South Africa bears the world’s largest burden of HIV with over 6.4 million people living with the virus. The South African government’s response to HIV has yielded remarkable results in recent years; over 13 million South Africans tested in a 2012 campaign and over 2 million people are on antiretroviral treatment. However, with an HIV & AIDS and STI National Strategic Plan aiming to get 80 percent of the population to know their HIV status by 2016, activists and public health policy makers argue that non-invasive HIV self-testing should be incorporated into the country HIV Counseling and Testing [HCT] portfolios. In-depth qualitative interviews (N = 12) with key stakeholders were conducted from June to July 2013 in South Africa. These included two government officials, four non-governmental stakeholders, two donors, three academic researchers, and one international stakeholder. All stakeholders were involved in HIV prevention and treatment and influenced HCT policy and research in South Africa and beyond. The interviews explored: interest in HIV self-testing; potential distribution channels for HIV self-tests to target groups; perception of requirements for diagnostic technologies that would be most amenable to HIV self-testing and opinions on barriers and opportunities for HIV-linkage to care after receiving positive test results. While there is currently no HIV self-testing policy in South Africa, and several barriers exist, participants in the study expressed enthusiasm and willingness for scale-up and urgent need for further research, planning, establishment of HIV Self-testing policy and programming to complement existing facility-based and community-based HIV testing systems. Introduction of HIV self-testing could have far-reaching positive effects on holistic HIV testing uptake, giving people autonomy to decide which approach they want to use for HIV testing, early diagnosis, treatment and care for HIV particularly among hard-to reach groups, including men.

Nitika Pant Pai,  Tarannum Behlim,  Lameze Abrahams … (2013)
Background In South Africa, stigma, discrimination, social visibility and fear of loss of confidentiality impede health facility-based HIV testing. With 50% of adults having ever tested for HIV in their lifetime, private, alternative testing options are urgently needed. Non-invasive, oral self-tests offer a potential for a confidential, unsupervised HIV self-testing option, but global data are limited. Methods A pilot cross-sectional study was conducted from January to June 2012 in health care workers based at the University of Cape Town, South Africa. An innovative, unsupervised, self-testing strategy was evaluated for feasibility; defined as completion of self-testing process (i.e., self test conduct, interpretation and linkage). An oral point-of-care HIV test, an Internet and paper-based self-test HIV applications, and mobile phones were synergized to create an unsupervised strategy. Self-tests were additionally confirmed with rapid tests on site and laboratory tests. Of 270 health care workers (18 years and above, of unknown HIV status approached), 251 consented for participation. Findings Overall, about 91% participants rated a positive experience with the strategy. Of 251 participants, 126 evaluated the Internet and 125 the paper-based application successfully; completion rate of 99.2%. All sero-positives were linked to treatment (completion rate:100% (95% CI, 66.0–100). About half of sero-negatives were offered counselling on mobile phones; completion rate: 44.6% (95% CI, 38.0–51.0). A majority of participants (78.1%) were females, aged 18–24 years (61.4%). Nine participants were found sero-positive after confirmatory tests (prevalence 3.6% 95% CI, 1.8–6.9). Six of nine positive self-tests were accurately interpreted; sensitivity: 66.7% (95% CI, 30.9–91.0); specificity:100% (95% CI, 98.1–100). Interpretation Our unsupervised self-testing strategy was feasible to operationalize in health care workers in South Africa. Linkages were successfully operationalized with mobile phones in all sero-positives and about half of the sero-negatives sought post-test counselling. Controlled trials and implementation research studies are needed before a scale-up is considered.

This is an open access article distributed under the Creative Commons Attribution License 4.0 (CCBY), which permits unrestricted use, distribution and reproduction in any medium, provided the original work is properly cited. http://creativecommons.org/licenses/by/4.0