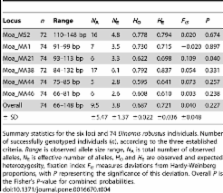 We present the first set of microsatellite markers developed exclusively for an extinct taxon. Microsatellite data have been analysed in thousands of genetic studies on extant species but the technology can be problematic when applied to low copy number (LCN) DNA. It is therefore rarely used on substrates more than a few decades old. Now, with the primers and protocols presented here, microsatellite markers are available to study the extinct New Zealand moa (Aves: Dinornithiformes) and, as with single nucleotide polymorphism (SNP) technology, the markers represent a means by which the field of ancient DNA can (preservation allowing) move on from its reliance on mitochondrial DNA. Candidate markers were identified using high throughput sequencing technology (GS-FLX) on DNA extracted from fossil moa bone and eggshell. From the ‘shotgun’ reads, >60 primer pairs were designed and tested on DNA from bones of the South Island giant moa ( Dinornis robustus). Six polymorphic loci were characterised and used to assess measures of genetic diversity. Because of low template numbers, typical of ancient DNA, allelic dropout was observed in 36–70% of the PCR reactions at each microsatellite marker. However, a comprehensive survey of allelic dropout, combined with supporting quantitative PCR data, allowed us to establish a set of criteria that maximised data fidelity. Finally, we demonstrated the viability of the primers and the protocols, by compiling a full Dinornis microsatellite dataset representing fossils of c. 600–5000 years of age. A multi-locus genotype was obtained from 74 individuals (84% success rate), and the data showed no signs of being compromised by allelic dropout. The methodology presented here provides a framework by which to generate and evaluate microsatellite data from samples of much greater antiquity than attempted before, and opens new opportunities for ancient DNA research.

Andreas Untergasser,  Harm Nijveen,  Xiangyu Rao … (2007)
Here we present Primer3Plus, a new web interface to the popular Primer3 primer design program as an enhanced alternative for the CGI- scripts that come with Primer3. Primer3 consists of a command line program and a web interface. The web interface is one large form showing all of the possible options. This makes the interface powerful, but at the same time confusing for occasional users. Primer3Plus provides an intuitive user interface using present-day web technologies and has been developed in close collaboration with molecular biologists and technicians regularly designing primers. It focuses on the task at hand, and hides detailed settings from the user until these are needed. We also added functionality to automate specific tasks like designing primers for cloning or step-wise sequencing. Settings and designed primer sequences can be stored locally for later use. Primer3Plus supports a range of common sequence formats, such as FASTA. Finally, primers selected by Primer3Plus can be sent to an order form, allowing tight integration into laboratory ordering systems. Moreover, the open architecture of Primer3Plus allows easy expansion or integration of external software packages. The Primer3Plus Perl source code is available under GPL license from SourceForge. Primer3Plus is available at http://www.bioinformatics.nl/primer3plus.

Estimating the probability of identity among genotypes in natural populations: cautions and guidelines.

L P Waits,  G Luikart,  P Taberlet (2001)
Individual identification using DNA fingerprinting methods is emerging as a critical tool in conservation genetics and molecular ecology. Statistical methods that estimate the probability of sampling identical genotypes using theoretical equations generally assume random associations between alleles within and among loci. These calculations are probably inaccurate for many animal and plant populations due to population substructure. We evaluated the accuracy of a probability of identity (P(ID)) estimation by comparing the observed and expected P(ID), using large nuclear DNA microsatellite data sets from three endangered species: the grey wolf (Canis lupus), the brown bear (Ursus arctos), and the Australian northern hairy-nosed wombat (Lasiorinyus krefftii). The theoretical estimates of P(ID) were consistently lower than the observed P(ID), and can differ by as much as three orders of magnitude. To help researchers and managers avoid potential problems associated with this bias, we introduce an equation for P(ID) between sibs. This equation provides an estimator that can be used as a conservative upper bound for the probability of observing identical multilocus genotypes between two individuals sampled from a population. We suggest computing the actual observed P(ID) when possible and give general guidelines for the number of codominant and dominant marker loci required to achieve a reasonably low P(ID) (e.g. 0.01-0.0001).

How to track and assess genotyping errors in population genetics studies.

A M Bonin,  E Bellemain,  P Bronken Eidesen … (2004)
Genotyping errors occur when the genotype determined after molecular analysis does not correspond to the real genotype of the individual under consideration. Virtually every genetic data set includes some erroneous genotypes, but genotyping errors remain a taboo subject in population genetics, even though they might greatly bias the final conclusions, especially for studies based on individual identification. Here, we consider four case studies representing a large variety of population genetics investigations differing in their sampling strategies (noninvasive or traditional), in the type of organism studied (plant or animal) and the molecular markers used [microsatellites or amplified fragment length polymorphisms (AFLPs)]. In these data sets, the estimated genotyping error rate ranges from 0.8% for microsatellite loci from bear tissues to 2.6% for AFLP loci from dwarf birch leaves. Main sources of errors were allelic dropouts for microsatellites and differences in peak intensities for AFLPs, but in both cases human factors were non-negligible error generators. Therefore, tracking genotyping errors and identifying their causes are necessary to clean up the data sets and validate the final results according to the precision required. In addition, we propose the outline of a protocol designed to limit and quantify genotyping errors at each step of the genotyping process. In particular, we recommend (i) several efficient precautions to prevent contaminations and technical artefacts; (ii) systematic use of blind samples and automation; (iii) experience and rigor for laboratory work and scoring; and (iv) systematic reporting of the error rate in population genetics studies.

Publisher ID: PONE-D-10-05038
DOI: 10.1371/journal.pone.0016670
PMC ID: 3031614
PubMed ID: 21304955
Copyright statement: Allentoft et al. This is an open-access article distributed under the terms of the Creative Commons Attribution License, which permits unrestricted use, distribution, and reproduction in any medium, provided the original author and source are credited.