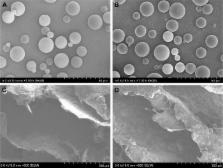 In the present study, curcumin (Cur)-loaded microspheres were incorporated into a fish collagen nano-hydroxyapatite scaffold to promote bone repair under diabetic conditions by inhibiting the reactive oxygen species production.

The drug release kinetic study showed that the Cur release from the composite scaffolds lasted up to 30 days. The sustained curcumin release from the scaffold significantly inhibited the overproduction of reactive oxygen species in mesenchymal stem cells caused by diabetic serum. Moreover, the Cur-loaded scaffold also remarkedly alleviated the negative effects of diabetic serum on the proliferation, migration, and osteogenic differentiation of mesenchymal stem cells. When implanted into bone defects in type 2 diabetic rats, the Cur-loaded scaffold also showed a greater bone formation capability compared to the pure scaffold.

The results of this study suggested that the novel controlled Cur release system may provide a promising route to improve bone regeneration in type 2 diabetic patients.

Waqar Ahmad,  Bushra Ijaz,  Khadija Shabbiri … (2017)
Reactive oxidative species (ROS) toxicity remains an undisputed cause and link between Alzheimer’s disease (AD) and Type-2 Diabetes Mellitus (T2DM). Patients with both AD and T2DM have damaged, oxidized DNA, RNA, protein and lipid products that can be used as possible disease progression markers. Although the oxidative stress has been anticipated as a main cause in promoting both AD and T2DM, multiple pathways could be involved in ROS production. The focus of this review is to summarize the mechanisms involved in ROS production and their possible association with AD and T2DM pathogenesis and progression. We have also highlighted the role of current treatments that can be linked with reduced oxidative stress and damage in AD and T2DM.

Diabetes-Induced Reactive Oxygen Species: Mechanism of Their Generation and Role in Renal Injury

Matthew C. Fadus,  CECILIA LAU,  Jai Bikhchandani … (2016)
Curcumin is a natural anti-inflammatory agent that has been used for treating medical conditions for many years. Several experimental and pharmacologic trials have demonstrated its efficacy in the role as an anti-inflammatory agent. Curcumin has been shown to be effective in treating chronic conditions like rheumatoid arthritis, inflammatory bowel disease, Alzheimer's and common malignancies like colon, stomach, lung, breast, and skin cancers. As treatments in medicine become more and more complex, the answer may be something simpler. This is a review article written with the objective to systematically analyze the wealth of information regarding the medical use of curcumin, the “curry spice”, and to understand the existent gaps which have prevented its widespread application in the medical community.