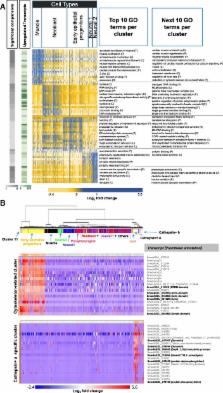 In the Lophotrochozoa/Spiralia superphylum, few organisms have as high a capacity for rapid testing of gene function and single-cell transcriptomics as the freshwater planaria. The species Schmidtea mediterranea in particular has become a powerful model to use in studying adult stem cell biology and mechanisms of regeneration. Despite this, systematic attempts to define gene complements and their annotations are lacking, restricting comparative analyses that detail the conservation of biochemical pathways and identify lineage-specific innovations.

In this study we compare several transcriptomes and define a robust set of 35,232 transcripts. From this, we perform systematic functional annotations and undertake a genome-scale metabolic reconstruction for S. mediterranea. Cross-species comparisons of gene content identify conserved, lineage-specific, and expanded gene families, which may contribute to the regenerative properties of planarians. In particular, we find that the TRAF gene family has been greatly expanded in planarians. We further provide a single-cell RNA sequencing analysis of 2000 cells, revealing both known and novel cell types defined by unique signatures of gene expression. Among these are a novel mesenchymal cell population as well as a cell type involved in eye regeneration. Integration of our metabolic reconstruction further reveals the extent to which given cell types have adapted energy and nucleotide biosynthetic pathways to support their specialized roles.

In general, S. mediterranea displays a high level of gene and pathway conservation compared with other model systems, rendering it a viable model to study the roles of these pathways in stem cell biology and regeneration.

Gabriel Östlund,  Thomas L Schmitt,  Kristoffer Forslund … (2010)
The InParanoid project gathers proteomes of completely sequenced eukaryotic species plus Escherichia coli and calculates pairwise ortholog relationships among them. The new release 7.0 of the database has grown by an order of magnitude over the previous version and now includes 100 species and their collective 1.3 million proteins organized into 42.7 million pairwise ortholog groups. The InParanoid algorithm itself has been revised and is now both more specific and sensitive. Based on results from our recent benchmarking of low-complexity filters in homology assignment, a two-pass BLAST approach was developed that makes use of high-precision compositional score matrix adjustment, but avoids the alignment truncation that sometimes follows. We have also updated the InParanoid web site (http://InParanoid.sbc.su.se). Several features have been added, the response times have been improved and the site now sports a new, clearer look. As the number of ortholog databases has grown, it has become difficult to compare among these resources due to a lack of standardized source data and incompatible representations of ortholog relationships. To facilitate data exchange and comparisons among ortholog databases, we have developed and are making available two XML schemas: SeqXML for the input sequences and OrthoXML for the output ortholog clusters.

Olivier Gascuel,  Jean-François Dufayard,  Frédéric Delsuc … (2008)
Our understanding of the origins, the functions and/or the structures of biological sequences strongly depends on our ability to decipher the mechanisms of molecular evolution. These complex processes can be described through the comparison of homologous sequences in a phylogenetic framework. Moreover, phylogenetic inference provides sound statistical tools to exhibit the main features of molecular evolution from the analysis of actual sequences. This chapter focuses on phylogenetic tree estimation under the maximum likelihood (ML) principle. Phylogenies inferred under this probabilistic criterion are usually reliable and important biological hypotheses can be tested through the comparison of different models. Estimating ML phylogenies is computationally demanding, and careful examination of the results is warranted. This chapter focuses on PhyML, a software that implements recent ML phylogenetic methods and algorithms. We illustrate the strengths and pitfalls of this program through the analysis of a real data set. PhyML v3.0 is available from (http://atgc_montpellier.fr/phyml/).