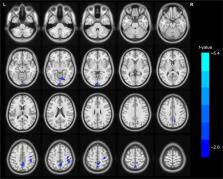 Abnormal brain structure and function in COPD has been reported on MRI. However, the deficit in local synchronization of spontaneous activity in patients with stable COPD remains unknown. The main aim of the present study was to explore spontaneous brain activity in patients with COPD compared with normal controls using the regional homogeneity (ReHo) method based on resting-state functional MRI.

Nineteen patients with stable COPD and 20 well-matched (including age, sex, and number of years of education) normal controls who were recruited for the present study underwent resting-state functional MRI examinations and a series of neuropsychological and clinical assessments. The ReHo method was used to assess the strength of local brain signal synchrony. The mean ReHo values in brain areas with abnormal ReHo were evaluated with a receiver operating characteristic curve. The relationships between the brain regions with altered ReHo values and the clinical and neuropsychological parameters in COPD patients were assessed using Pearson’s correlation.

The COPD patients demonstrated abnormal synchrony of regional spontaneous activity, and the regions with abnormal activity were all correlated with visual processing pathways, which might provide us with a new perspective to further understand the underlying pathophysiology of cognitive impairment in patients with COPD.

Mahassim Saleem,  Chris I. Baker,  Mortimer Mishkin … (2011)
The division of cortical visual processing into distinct dorsal and ventral streams is a key framework that has guided visual neuroscience. The characterization of the ventral stream as a 'What' pathway is relatively uncontroversial, but the nature of dorsal stream processing is less clear. Originally proposed as mediating spatial perception ('Where'), more recent accounts suggest it primarily serves non-conscious visually guided action ('How'). Here, we identify three pathways emerging from the dorsal stream that consist of projections to the prefrontal and premotor cortices, and a major projection to the medial temporal lobe that courses both directly and indirectly through the posterior cingulate and retrosplenial cortices. These three pathways support both conscious and non-conscious visuospatial processing, including spatial working memory, visually guided action and navigation, respectively.

Baoquan Min,  Jie Lu,  Jianping Jia … (2011)
Here we utilized resting-state functional magnetic resonance imaging (R-fMRI) to measure the amplitude of low-frequency fluctuations (ALFF) and fractional ALFF (fALFF) in 24 patients with amnestic mild cognitive impairment (aMCI) and 24 age- and sex-matched healthy controls. Two different frequency bands (slow-5: 0.01-0.027 Hz; slow-4: 0.027-0.073 Hz) were analyzed. We showed that there were widespread differences in ALFF/fALFF between the two bands in many brain regions, predominantly including the medial prefrontal cortex (MPFC), posterior cingulate cortex/precuneus (PCC/PCu), basal ganglia, and hippocampus/parahippocampal gyrus (PHG). Compared to controls, the aMCI patients had decreased ALFF/fALFF values in the PCC/PCu, MPFC, hippocampus/PHG, basal ganglia, and prefrontal regions, and increased ALFF/fALFF values mainly in several occipital and temporal regions. Specifically, we observed that the ALFF/fALFF abnormalities in the PCC/PCu, PHG, and several occipital regions were greater in the slow-5 band than in the slow-4 band. Finally, our results of functional analysis were not significantly influenced by the gray matter loss in the MCI patients, suggesting that the results reflect functional differences between groups. Together, our data suggest that aMCI patients have widespread abnormalities in intrinsic brain activity, and the abnormalities depend on the studied frequency bands of R-fMRI data. Copyright © 2010 Elsevier Inc. All rights reserved.