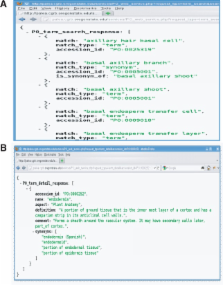 The Plant Ontology (PO; http://www.plantontology.org/) is a publicly available, collaborative effort to develop and maintain a controlled, structured vocabulary (‘ontology’) of terms to describe plant anatomy, morphology and the stages of plant development. The goals of the PO are to link (annotate) gene expression and phenotype data to plant structures and stages of plant development, using the data model adopted by the Gene Ontology. From its original design covering only rice, maize and Arabidopsis, the scope of the PO has been expanded to include all green plants. The PO was the first multispecies anatomy ontology developed for the annotation of genes and phenotypes. Also, to our knowledge, it was one of the first biological ontologies that provides translations (via synonyms) in non-English languages such as Japanese and Spanish. As of Release #18 (July 2012), there are about 2.2 million annotations linking PO terms to >110,000 unique data objects representing genes or gene models, proteins, RNAs, germplasm and quantitative trait loci (QTLs) from 22 plant species. In this paper, we focus on the plant anatomical entity branch of the PO, describing the organizing principles, resources available to users and examples of how the PO is integrated into other plant genomics databases and web portals. We also provide two examples of comparative analyses, demonstrating how the ontology structure and PO-annotated data can be used to discover the patterns of expression of the LEAFY ( LFY) and terpene synthase ( TPS) gene homologs.

Alberto Casagrande (2007)
The analysis of the first plant genomes provided unexpected evidence for genome duplication events in species that had previously been considered as true diploids on the basis of their genetics. These polyploidization events may have had important consequences in plant evolution, in particular for species radiation and adaptation and for the modulation of functional capacities. Here we report a high-quality draft of the genome sequence of grapevine (Vitis vinifera) obtained from a highly homozygous genotype. The draft sequence of the grapevine genome is the fourth one produced so far for flowering plants, the second for a woody species and the first for a fruit crop (cultivated for both fruit and beverage). Grapevine was selected because of its important place in the cultural heritage of humanity beginning during the Neolithic period. Several large expansions of gene families with roles in aromatic features are observed. The grapevine genome has not undergone recent genome duplication, thus enabling the discovery of ancestral traits and features of the genetic organization of flowering plants. This analysis reveals the contribution of three ancestral genomes to the grapevine haploid content. This ancestral arrangement is common to many dicotyledonous plants but is absent from the genome of rice, which is a monocotyledon. Furthermore, we explain the chronology of previously described whole-genome duplication events in the evolution of flowering plants.