Greater Activity in the Frontal Cortex on Left Curves: A Vector-Based fNIRS Study of Left and Right Curve Driving 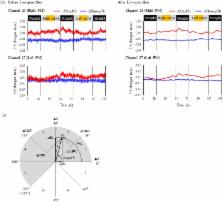 In the brain, the mechanisms of attention to the left and the right are known to be different. It is possible that brain activity when driving also differs with different horizontal road alignments (left or right curves), but little is known about this. We found driver brain activity to be different when driving on left and right curves, in an experiment using a large-scale driving simulator and functional near-infrared spectroscopy (fNIRS).

The participants were fifteen healthy adults. We created a course simulating an expressway, comprising straight line driving and gentle left and right curves, and monitored the participants under driving conditions, in which they drove at a constant speed of 100 km/h, and under non-driving conditions, in which they simply watched the screen (visual task). Changes in hemoglobin concentrations were monitored at 48 channels including the prefrontal cortex, the premotor cortex, the primary motor cortex and the parietal cortex. From orthogonal vectors of changes in deoxyhemoglobin and changes in oxyhemoglobin, we calculated changes in cerebral oxygen exchange, reflecting neural activity, and statistically compared the resulting values from the right and left curve sections.

Noman Naseer,  Keum-Shik Hong (2015)
A brain-computer interface (BCI) is a communication system that allows the use of brain activity to control computers or other external devices. It can, by bypassing the peripheral nervous system, provide a means of communication for people suffering from severe motor disabilities or in a persistent vegetative state. In this paper, brain-signal generation tasks, noise removal methods, feature extraction/selection schemes, and classification techniques for fNIRS-based BCI are reviewed. The most common brain areas for fNIRS BCI are the primary motor cortex and the prefrontal cortex. In relation to the motor cortex, motor imagery tasks were preferred to motor execution tasks since possible proprioceptive feedback could be avoided. In relation to the prefrontal cortex, fNIRS showed a significant advantage due to no hair in detecting the cognitive tasks like mental arithmetic, music imagery, emotion induction, etc. In removing physiological noise in fNIRS data, band-pass filtering was mostly used. However, more advanced techniques like adaptive filtering, independent component analysis (ICA), multi optodes arrangement, etc. are being pursued to overcome the problem that a band-pass filter cannot be used when both brain and physiological signals occur within a close band. In extracting features related to the desired brain signal, the mean, variance, peak value, slope, skewness, and kurtosis of the noised-removed hemodynamic response were used. For classification, the linear discriminant analysis method provided simple but good performance among others: support vector machine (SVM), hidden Markov model (HMM), artificial neural network, etc. fNIRS will be more widely used to monitor the occurrence of neuro-plasticity after neuro-rehabilitation and neuro-stimulation. Technical breakthroughs in the future are expected via bundled-type probes, hybrid EEG-fNIRS BCI, and through the detection of initial dips.

Where we look when we steer.

J A Land,  Stephanie D Lee (1994)
Steering a car requires visual information from the changing pattern of the road ahead. There are many theories about what features a driver might use, and recent attempts to engineer self-steering vehicles have sharpened interest in the mechanisms involved. However, there is little direct information linking steering performance to the driver's direction of gaze. We have made simultaneous recordings of steering-wheel angle and drivers' gaze direction during a series of drives along a tortuous road. We found that drivers rely particularly on the 'tangent point' on the inside of each curve, seeking this point 1-2 s before each bend and returning to it throughout the bend. The direction of this point relative to the car's heading predicts the curvature of the road ahead, and we examine the way this information is used.

The experiment and research expenses were funded by NEXCO. The funders had role in study design, data collection, and decision to publish. The funders had no role in data analysis and preparation of the manuscript.