Prevalence and risk factors of hepatitis B and C virus infections in an impoverished urban community in Dhaka, Bangladesh 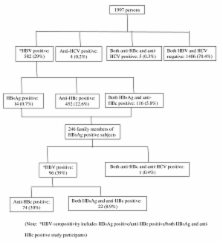 Viral hepatitis is a serious global public health problem affecting billions of people globally, and both hepatitis B virus (HBV) and hepatitis C virus (HCV) infections are rapidly spreading in the developing countries including Bangladesh due to the lack of health education, poverty, illiteracy and lack of hepatitis B vaccination. Also there is lack of information on their prevalence among the general population. So, a population-based serological survey was conducted in Dhaka to determine the prevalence and risk factors of HBV and HCV infections.

The results indicate intermediate level of endemicity of HBV infection in Dhaka community, with much higher prevalence among family members of HBsAg positive individuals but low prevalence of HCV infections, clearly indicating need for universal hepatitis B vaccination. The use of disposable needles for ear-nose-body piercing need to be promoted through public awareness programmes as a preventive strategy.

T Poynard,  Pierre Bedossa,  Thierry Poynard … (1997)
Our aim was to assess the natural history of liver fibrosis progression in hepatitis C and the factors associated with this progression. We recruited 2235 patients from the Observatoire de l'Hépatite C (OBSVIRC) population, the Cohorte Hépatite C Pitié-Salpétrière (DOSVIRC) population, and the original METAVIR population. All the patients had a biopsy sample compatible with chronic hepatitis C as assessed by the METAVIR scoring system (grades the stage of fibrosis on a five-point scale, F0 = no fibrosis, F4 = cirrhosis, and histological activity on a four-point scale, A0 = no activity, A3 = severe activity). No patient had received interferon treatment before the liver biopsy sample was obtained. We assessed the effect of nine factors on fibrosis progression: age at biopsy; estimated duration of infection; sex; age at infection; alcohol consumption; hepatitis C virus C (HCV) genotype; HCV viraemia; cause of infection; and histological activity grade. We defined fibrosis progression per year as the ratio between fibrosis stage in METAVIR units and the duration of infection (1 unit = one stage, 4 units = cirrhosis). The median rate of fibrosis progression per year was 0.133 fibrosis unit (95% CI 0.125-0.143), which was similar to the estimates from previous studies (0.146 to 0.154). Three independent factors were associated with an increased rate of fibrosis progression: age at infection older than 40 years, daily alcohol consumption of 50 g or more, and male sex. There was no association between fibrosis progression and HCV genotype. The median estimated duration of infection for progression to cirrhosis was 30 years (28-32), ranging from 13 years in men infected after the age of 40 to 42 years in women who did not drink alcohol and were infected before the age of 40. Without treatment, 377 (33%) patients had an expected median time to cirrhosis of less than 20 years, and 356 (31%) will never progress to cirrhosis or will not progress for at least 50 years. The host factors of ageing, alcohol consumption, and male sex have a stronger association with fibrosis progression than virological factors in HCV infection.

H Alter,  L Seeff (1999)
Hepatitis C has emerged in recent years as the most common basis for liver disease in the United States, having infected an estimated 3.9 million people in this country and an estimated 170 million worldwide. Currently, it is the predominant reason for undergoing liver transplantation. The disease it causes is characterized by silent onset in most infected individuals, a high rate of viral persistence, and the potential for development of ever-worsening chronic liver disease, ranging from chronic hepatitis to cirrhosis and occasionally to hepatocellular carcinoma. Such progression, when it occurs, is also most commonly a silent process that may take 20-40, and occasionally even more, years to reach its end point. Because of these characteristics, it has been exceedingly difficult to accurately assess the natural history. Efforts to accomplish this have consisted of retrospective, prospective, and cohort studies. The most concerning data have derived from the retrospective study approach, generally performed at tertiary referral centers. Because these centers commonly attract persons with existing chronic liver disease, they have tended to describe a high rate of progression to cirrhosis and cancer. This "referral bias" is avoided in the prospective and cohort study approach, and data derived from these studies indicate a lower rate of progression and a correspondingly higher rate of either recovery or minimal liver disease. In this review, we briefly describe potential mechanisms of viral persistence; present detailed information on outcomes that have derived from retrospective, prospective, and cohort studies, involving both adults and children; examine the data regarding progression of fibrosis and of progression to hepatocellular carcinoma; consider cofactors that might enhance liver disease progression; and report the emerging data that suggest that spontaneous viral clearance may be higher than is currently believed. We conclude with the view that severe, life-threatening, progressive liver disease clearly occurs in a sizable minority (perhaps 30%) of chronically infected persons but speculate that fibrosis progression is neither linear or inevitable and hence that most hepatitis C virus carriers will have either a stable nonprogressive course or such indolent progression that they will die from an unrelated disease before the severe sequelae of hepatitis C become manifest or will have a sustained "curative" response to therapy. Although this view provides reasonable hope to the hepatitis C virus-infected individual, it does not deny the enormous burden this infection presents as the result of its high prevalence and global distribution. The sheer magnitude of the infected population will result in a large number with severe life-threatening liver disease even if the proportion of infected individuals that develop progressive disease is relatively small.

M. Memon,  M A Memon (2002)
The aim of the study was to analyse the current literature regarding the mode of transmission of HCV and its global prevalence in different groups of people. A systematic review of the literature on the epidemiology of hepatitis C from 1991 to 2000 using computerized bibliographic databases which include Medline, Current Content and Embase. The prevalence of hepatitis C virus (HCV) varies tremendously in different parts of the world, with the highest incidence in the Eastern parts of the globe compared with the Western parts. Furthermore, certain groups of individuals such as intravenous drug users are at increased risk of acquiring this disease irrespective of the geographical location. Although the main route of transmission is via contaminated blood, curiously enough in up to 50% of the cases no recognizable transmission factor/route could be identified. Therefore, a number of other routes of transmission such as sexual or household exposure to infected contacts have been investigated with conflicting results. Hepatitis C infection is an important public health issue globally. Better understanding of routes of transmission will help to combat the spread of disease. In order to prevent a world wide epidemic of this disease, urgent measures are required to (i) develop a strategy to inform and educate the public regarding this disease and (ii) expedite the efforts to develop a vaccine.