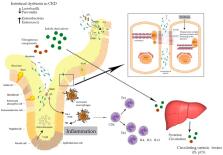 In the intestines, probiotics can produce antagonistic effects such as antibiotic–like compounds, bactericidal proteins such as bacteriocins, and encourage the production of metabolic end products that may assist in preventing infections from various pathobionts (capable of pathogenic activity) microbes. Metabolites produced by intestinal bacteria and the adoptions of molecular methods to cross-examine and describe the human microbiome have refreshed interest in the discipline of nephology. As such, the adjunctive administration of probiotics for the treatment of chronic kidney disease (CKD) posits that certain probiotic bacteria can reduce the intestinal burden of uremic toxins. Uremic toxins eventuate from the over manifestation of glucotoxicity and lipotoxicity, increased activity of the hexosamine and polyol biochemical and synthetic pathways. The accumulation of advanced glycation end products that have been regularly associated with a dysbiotic colonic microbiome drives the overproduction of uremic toxins in the colon and the consequent local pro-inflammatory processes. Intestinal dysbiosis associated with significant shifts in abundance and diversity of intestinal bacteria with a resultant and maintained uremia promoting an uncontrolled mucosal pro-inflammatory state. In this narrative review we further address the efficacy of probiotics and highlighted in part the probiotic bacterium Streptococcus thermophilus as an important modulator of uremic toxins in the gut of patients diagnosed with chronic kidney disease. In conjunction with prudent nutritional practices it may be possible to prevent the progression of CKD and significantly downregulate mucosal pro-inflammatory activity with the administration of probiotics that contain S. thermophilus.

Christophe Fremaux,  Hélène Deveau,  Rodolphe Barrangou … (2008)
Clustered regularly interspaced short palindromic repeats (CRISPR) and their associated genes are linked to a mechanism of acquired resistance against bacteriophages. Bacteria can integrate short stretches of phage-derived sequences (spacers) within CRISPR loci to become phage resistant. In this study, we further characterized the efficiency of CRISPR1 as a phage resistance mechanism in Streptococcus thermophilus. First, we show that CRISPR1 is distinct from previously known phage defense systems and is effective against the two main groups of S. thermophilus phages. Analyses of 30 bacteriophage-insensitive mutants of S. thermophilus indicate that the addition of one new spacer in CRISPR1 is the most frequent outcome of a phage challenge and that the iterative addition of spacers increases the overall phage resistance of the host. The added new spacers have a size of between 29 to 31 nucleotides, with 30 being by far the most frequent. Comparative analysis of 39 newly acquired spacers with the complete genomic sequences of the wild-type phages 2972, 858, and DT1 demonstrated that the newly added spacer must be identical to a region (named proto-spacer) in the phage genome to confer a phage resistance phenotype. Moreover, we found a CRISPR1-specific sequence (NNAGAAW) located downstream of the proto-spacer region that is important for the phage resistance phenotype. Finally, we show through the analyses of 20 mutant phages that virulent phages are rapidly evolving through single nucleotide mutations as well as deletions, in response to CRISPR1.

The intestinal microbiota, a leaky gut, and abnormal immunity in kidney disease.

Bärbel Stecher,  Hans-Joachim Anders,  Kell K. Andersen (2013)
Chronic kidney disease (CKD) and end-stage renal disease (ESRD) are associated with systemic inflammation and acquired immunodeficiency, which promote cardiovascular disease, body wasting, and infections as leading causes of death. This phenomenon persists despite dialysis-related triggers of immune deregulation having been largely eliminated. Here we propose a potential immunoregulatory role of the intestinal microbiota in CKD/ESRD. We discuss how the metabolic alterations of uremia favor pathogen overgrowth (dysbiosis) in the gut and an increased translocation of living bacteria and bacterial components. This process has the potential to activate innate immunity and systemic inflammation. Persistent innate immune activation involves the induction of immunoregulatory mediators that suppress innate and adaptive immunity, similar to the concept of 'endotoxin tolerance' or 'immune paralysis' in advanced sepsis or chronic infections. Renal science has largely neglected the gut as a source of triggers for CKD/ESRD-related immune derangements and complications and lags behind on the evolving microbiota research. Interdisciplinary research activities at all levels are needed to unravel the pathogenic role of the intestinal microbiota in kidney disease and to evaluate if therapeutic interventions that manipulate the microbiota, such as pre- or probiotics, have a therapeutic potential to correct CKD/ESRD-related immune deregulation and to prevent the associated complications.

Association between albuminuria, kidney function, and inflammatory biomarker profile in CKD in CRIC.

Rena R Wing,  V. Balakrishnan,  Peter A. Kanetsky … (2012)
Increased risk of mortality in patients with CKD has been attributed to inflammation. However, the association between kidney function, albuminuria, and biomarkers of inflammation has not been examined in a large cohort of CKD patients. This study measured the plasma levels of IL-1β, IL-1 receptor antagonist (IL-1RA), IL-6, TNF-α, TGF-β, high-sensitivity C-reactive protein (hs-CRP), fibrinogen, and serum albumin in 3939 participants enrolled in the Chronic Renal Insufficiency Cohort study between June 2003 and September 2008. An inflammation score was established based on plasma levels of IL-1β, IL-6, TNF-α, hs-CRP, and fibrinogen. Estimated GFR (eGFR) and serum cystatin C were used as measures of kidney function. Albuminuria was quantitated by urine albumin to creatinine ratio (UACR). Plasma levels of IL-1β, IL-1RA, IL-6, TNF-α, hs-CRP, and fibrinogen were higher among participants with lower levels of eGFR. Inflammation score was higher among those with lower eGFR and higher UACR. In regression analysis adjusted for multiple covariates, eGFR, cystatin C, and UACR were strongly associated with fibrinogen, serum albumin, IL-6, and TNF-α. Each unit increase in eGFR, cystatin C, and UACR was associated with a -1.2% (95% confidence interval, -1.4, -1), 64.9% (56.8, 73.3) and 0.6% (0.4, 0.8) change in IL-6, respectively (P<0.001). Biomarkers of inflammation were inversely associated with measures of kidney function and positively with albuminuria.