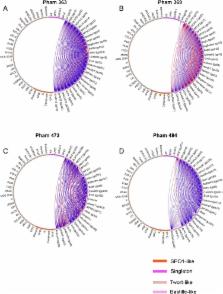 Spounavirinae viruses have received an increasing interest as tools for the control of harmful bacteria due to their relatively broad host range and strictly virulent phenotype.

In this study, we collected and analyzed the complete genome sequences of 61 published phages, either ICTV-classified or candidate members of the Spounavirinae subfamily of the Myoviridae. A set of comparative analyses identified a distinct, recently proposed Bastille-like phage group within the Spounavirinae. More importantly, type 1 thymidylate synthase (TS1) and dihydrofolate reductase (DHFR) genes were shown to be unique for the members of the proposed Bastille-like phage group, and are suitable as molecular markers. We also show that the members of this group encode beta-lactamase and/or sporulation-related SpoIIIE homologs, possibly questioning their suitability as biocontrol agents.

Evolutionary relationships among diverse bacteriophages and prophages: all the world's a phage.

Graham F. Hatfull,  Andrew Burns,  Ruth Ford … (1999)
We report DNA and predicted protein sequence similarities, implying homology, among genes of double-stranded DNA (dsDNA) bacteriophages and prophages spanning a broad phylogenetic range of host bacteria. The sequence matches reported here establish genetic connections, not always direct, among the lambdoid phages of Escherichia coli, phage phiC31 of Streptomyces, phages of Mycobacterium, a previously unrecognized cryptic prophage, phiflu, in the Haemophilus influenzae genome, and two small prophage-like elements, phiRv1 and phiRv2, in the genome of Mycobacterium tuberculosis. The results imply that these phage genes, and very possibly all of the dsDNA tailed phages, share common ancestry. We propose a model for the genetic structure and dynamics of the global phage population in which all dsDNA phage genomes are mosaics with access, by horizontal exchange, to a large common genetic pool but in which access to the gene pool is not uniform for all phage.

Christian Cambillau,  David Veesler (2011)
Bacteriophages belonging to the order Caudovirales possess a tail acting as a molecular nanomachine used during infection to recognize the host cell wall, attach to it, pierce it, and ensure the high-efficiency delivery of the genomic DNA to the host cytoplasm. In this review, we provide a comprehensive analysis of the various proteins constituting tailed bacteriophages from a structural viewpoint. To this end, we had in mind to pinpoint the resemblances within and between functional modules such as capsid/tail connectors, the tails themselves, or the tail distal host recognition devices, termed baseplates. This comparison has been extended to bacterial machineries embedded in the cell wall, for which shared molecular homology with phages has been recently revealed. This is the case for the type VI secretion system (T6SS), an inverted phage tail at the bacterial surface, or bacteriocins. Gathering all these data, we propose that a unique ancestral protein fold may have given rise to a large number of bacteriophage modules as well as to some related bacterial machinery components.