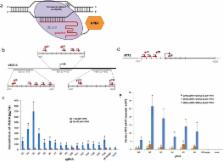 Catalytically inactive CRISPR-associated 9 nuclease (dCas9) can be directed by short guide RNAs (gRNAs) to repress endogenous genes in bacteria and human cells. Here we show that a dCas9-VP64 transcriptional activation domain fusion protein can be directed by single or multiple gRNAs to increase expression of specific endogenous human genes. These results provide an important proof-of-principle that CRISPR-Cas systems can be used to target heterologous effector domains in human cells.

Woong Hwang,  Yanfang Fu,  Deepak Reyon … (2013)
Clustered regularly interspaced short palindromic repeats (CRISPR)/CRISPR-associated (Cas) systems have evolved in bacteria and archaea as a defense mechanism to silence foreign nucleic acids of viruses and plasmids. Recent work has shown that bacterial type II CRISPR systems can be adapted to create guide RNAs (gRNAs) capable of directing site-specific DNA cleavage by the Cas9 nuclease in vitro. Here we show that this system can function in vivo to induce targeted genetic modifications in zebrafish embryos with efficiencies comparable to those obtained using ZFNs and TALENs for the same genes. RNA-guided nucleases robustly enabled genome editing at 9 of 11 different sites tested, including two for which TALENs previously failed to induce alterations. These results demonstrate that programmable CRISPR/Cas systems provide a simple, rapid, and highly scalable method for altering genes in vivo, opening the door to using RNA-guided nucleases for genome editing in a wide range of organisms.