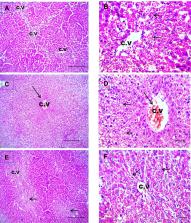 Drug-induced liver injury (DILI) is the most common cause of acute liver failure. The aim of this study was to investigate the molecular mechanisms by which Ganoderma lucidum mushroom (GLM) may ameliorate cisplatin (CP)-induced hepatotoxicity theoretically and experimentally.

Thirty-six male Sprague-Dawley (SD) rats were divided into six groups, two of them are normal and Ganoderma lucidum control groups. Liver injury was induced by a single dose of CP (12 mg/kg i.p) in four groups, one of them is CP control group. Besides cisplatin injection in day 1, rats in groups (4–6) were subjected to GLM (500 mg/kg/day) either every other day or daily oral dose or via i.p injection for 10 consecutive days.

In this study, GLM supplementation caused significant reduction of elevated high-mobility group box-1 (HMGB-1) with a concurrent decline in TNF-α and upregulation of IL-10 compared to the CP group (P<0.05). The histopathological and fibrosis evaluation significantly confirmed the improvement upon simultaneous treatment with GLM. Moreover, immunohistochemical examination also confirmed the recovery following GLM treatment indicated by downregulation of NF-κB, p53 and caspase-3 along with upsurge of B-cell lymphoma 2 (Bcl-2) expression (P<0.05). GLM treatment significantly decreased serum levels of hepatic injury markers; ALT, AST, T. bilirubin as well as oxidative stress markers; MDA and H 2O 2 with a concomitant increase in hepatic GSH and SOD. Also, the performed docking simulation of ganoderic acid exhibited good fitting and binding with HMGB-1 through hydrogen bond formation with conservative amino acids which gives a strong evidence for its hepatoprotective effect and may interpret the effect of Ganoderma lucidum.

GLM attenuated hepatic injury through downregulation of HMGB-1/NF-kB and caspase-3 resulted in modulation of the induced oxidative stress and the subsequent cross-talk between the inflammatory and apoptotic cascade indicating its promising role in DILI.

Caspases: the executioners of apoptosis.

Gerald Cohen (1997)
Apoptosis is a major form of cell death, characterized initially by a series of stereotypic morphological changes. In the nematode Caenorhabditis elegans, the gene ced-3 encodes a protein required for developmental cell death. Since the recognition that CED-3 has sequence identity with the mammalian cysteine protease interleukin-1 beta-converting enzyme (ICE), a family of at least 10 related cysteine proteases has been identified. These proteins are characterized by almost absolute specificity for aspartic acid in the P1 position. All the caspases (ICE-like proteases) contain a conserved QACXG (where X is R, Q or G) pentapeptide active-site motif. Capases are synthesized as inactive proenzymes comprising an N-terminal peptide (prodomain) together with one large and one small subunit. The crystal structures of both caspase-1 and caspase-3 show that the active enzyme is a heterotetramer, containing two small and two large subunits. Activation of caspases during apoptosis results in the cleavage of critical cellular substrates, including poly(ADP-ribose) polymerase and lamins, so precipitating the dramatic morphological changes of apoptosis. Apoptosis induced by CD95 (Fas/APO-1) and tumour necrosis factor activates caspase-8 (MACH/FLICE/Mch5), which contains an N-terminus with FADD (Fas-associating protein with death domain)-like death effector domains, so providing a direct link between cell death receptors and the caspases. The importance of caspase prodomains in the regulation of apoptosis is further highlighted by the recognition of adapter molecules, such as RAIDD [receptor-interacting protein (RIP)-associated ICH-1/CED-3-homologous protein with a death domain]/CRADD (caspase and RIP adapter with death domain), which binds to the prodomain of caspase-2 and recruits it to the signalling complex. Cells undergoing apoptosis following triggering of death receptors execute the death programme by activating a hierarchy of caspases, with caspase-8 and possibly caspase-10 being at or near the apex of this apoptotic cascade.

Alexander P. N. A. de Porto,  Anna Rubartelli,  Angela Bachi … (2003)
High Mobility Group 1 protein (HMGB1) is a chromatin component that, when leaked out by necrotic cells, triggers inflammation. HMGB1 can also be secreted by activated monocytes and macrophages, and functions as a late mediator of inflammation. Secretion of a nuclear protein requires a tightly controlled relocation program. We show here that in all cells HMGB1 shuttles actively between the nucleus and cytoplasm. Monocytes and macrophages acetylate HMGB1 extensively upon activation with lipopolysaccharide; moreover, forced hyperacetylation of HMGB1 in resting macrophages causes its relocalization to the cytosol. Cytosolic HMGB1 is then concentrated by default into secretory lysosomes, and secreted when monocytic cells receive an appropriate second signal.

De-Po Yang,  Joost Oppenheim (2005)
The recruitment and activation of antigen-presenting cells are critical early steps in mounting an immune response. Many microbial components and endogenous mediators participate in this process. Recent studies have identified a group of structurally diverse multifunctional host proteins that are rapidly released following pathogen challenge and/or cell death and, most importantly, are able to both recruit and activate antigen-presenting cells. These potent immunostimulants, including defensins, cathelicidin, eosinophil-derived neurotoxin, and high-mobility group box protein 1, serve as early warning signals to activate innate and adaptive immune systems. We propose to highlight these proteins' unique activities by grouping them under the novel term 'alarmins', in recognition of their role in mobilizing the immune system.