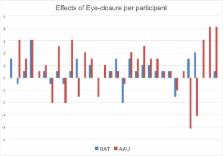 In today’s world of rapid changes and increasing complexity, understanding and enhancing creativity is of critical importance. Studies investigating EEG correlates of creativity linked power in the alpha frequency band to creativity, and alpha-power has been interpreted as reflecting attention on internal mental representations and inhibition of external sensory input. Thus far, however, there is no direct evidence for the idea that internally directed attention facilitates creativity. The aim of the current study was to experimentally investigate the relationship between eye-closure—a simple and effective means to stimulate internally directed attention—and creativity. Moreover, to test whether the potential beneficial effect of eye-closure is specific for creativity, or whether it improves general cognitive functioning, the current study tested the effect of eye-closure on creativity and on working memory (WM). Participants completed four tasks to measure divergent and convergent creativity (Adapted Alternative Uses (AAU) Test, Remote Associates Test (RAT), Sentence Construction Test, and Word Construction Test), and one task to measure WM (Digit Span Test). For each task, participants had to perform two versions, one version with eyes open and one version with eyes closed. Eye-closure facilitated creative performance on the classical divergent and convergent creativity tasks (AAU Test and RAT). No effect of eye-closure was observed on the WM task. These findings provide a novel and easily applicable means to enhance divergent and convergent creativity through eye-closure.

The associative basis of the creative process.

Oscillations in the alpha band (9-12 Hz) increase with memory load during retention in a short-term memory task.

Michele Gelfand,  Ole Jensen,  John Kounios … (2002)
To study the role of brain oscillations in working memory, we recorded the scalp electroencephalogram (EEG) during the retention interval of a modified Sternberg task. A power spectral analysis of the EEG during the retention interval revealed a clear peak at 9-12 Hz, a frequency in the alpha band (8-13 Hz). In apparent conflict with previous ideas according to which alpha band oscillations represent brain "idling", we found that the alpha peak systematically increased with the number of items held in working memory. The enhancement was prominent over the posterior and bilateral central regions. The enhancement over posterior regions is most likely explained by the well known alpha rhythm produced close to the parietal-occipital fissure, whereas the lateral enhancement could be explained by sources in somato-motor cortex. A time-frequency analysis revealed that the enhancement was present throughout the last 2.5 s of the 2.8 s retention interval and that alpha power rapidly diminished following the probe. The load dependence and the tight temporal regulation of alpha provide strong evidence that the alpha generating system is directly or indirectly linked to the circuits responsible for working memory. Although a clear peak in the theta band (5-8 Hz) was only detectable in one subject, other lines of evidence indicate that theta occurs and also has a role in working memory. Hypotheses concerning the role of alpha band activity in working memory are discussed.

Post-movement beta synchronization. A correlate of an idling motor area?